The club's on an upward swing. And corporates don't want to be left out. 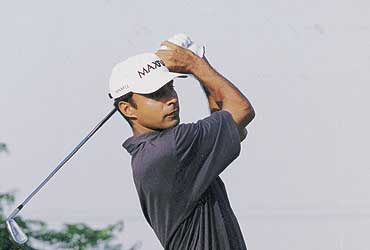 A one-square-inch dimpled ball whacked around a huge expanse of green spread over acres of a landscaped golf course can make the grown-up break down in tears. But guys like Jyoti Randhawa, Jeev Milkha Singh, Arjun Atwal, Gaurav Ghei, Harmeet Kahlon and Arjun Singh, all boys from affluent backgrounds, have no problems playing this game. So much so that this group of gifted Indian professional golfers is on the verge of breaking into the highest class of professional golf.

Indian professional golf has truly come of age, thanks to some sparkling performances and feats on the green this year (see box). In recent weeks, it has been on an upswing: a new star-studded corporate event called the Madhavrao Scindia tournament was born; the Tatas entered pro-golf; Randhawa and Atwal occupied the first and third positions in Asia; Jeev Milkha and Kahlon just missed out on the US PGA and European Tours respectively. Even amateurs like Shiv Kapur and Simarjeet Singh have brought home laurels—Kapur became the first Indian in 20 years to win the Asian Games gold medal at Busan, and Simarjeet is the first to win the prestigious Sri Lankan International amateur event three times in a row.

In many ways, the young man who sparked off dreams for the Indian golfer was Jeev Milkha Singh, son of star runner Milkha Singh. Jeev wanted to be an athlete, but took to the green, inspired by his father who moved to golf in his after-athletics years. That was then. Since then, Jeev has won more than a couple of million dollars in the last three seasons and has played alongside the very best in the world.

Randhawa, son of a golf-mad army officer (more than half of the 200-odd courses in India are managed by the Services), could have been into any sport. He says he was "fairly good at swimming and athletics, and loved squash, shooting and riding motorcycles". His father...