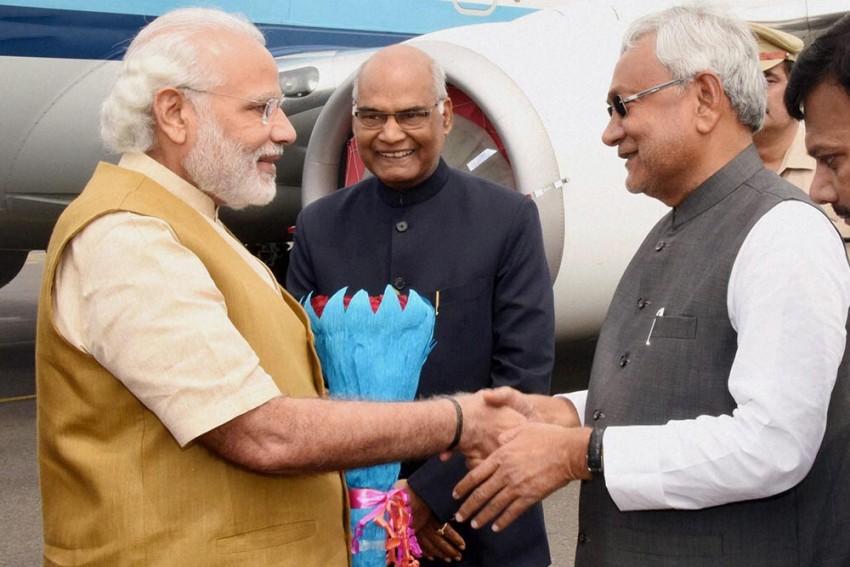 Arch Ally?
Nitish and Modi during the latter’s visit to Bihar in 2016
Photograph by PTI
Bhavna Vij-Aurora July 28, 2017 00:00 IST The BJP’s Takeover Orchestra 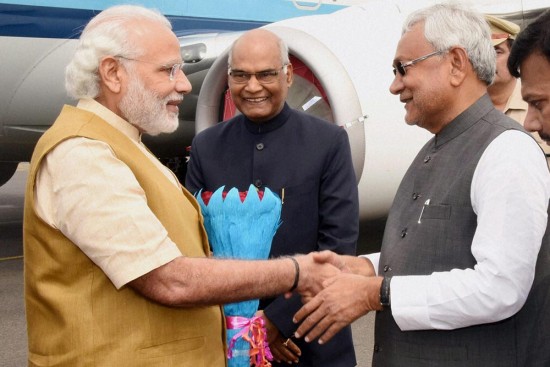 On July 26, Bihar went from blue to saffron in the country’s colour-coded map that is kept in BJP president Amit Shah’s office. The blue on the map signifies non-BJP ruled states. As the colour blue shrinks some more, so do the chances of Opposition putting up a joint fight against Narendra Modi in 2019.

Twenty months after losing Bihar to the Mahagathbandhan (Grand Alliance) comprising RJD, JDU and the Congress, the BJP has bounced back to form government in the state. Party leaders are quick to give credit to ‘master-strategist’ Shah for out-manoeuvring the Opposition not just in Bihar, but effectively ensuring it remains in disarray at the national level.

The BJP had managed to win only 53 seats—58 along with its allies—in a 243-seat Bihar assembly in 2015. The party had been bristling ever since it lost the state despite riding the crest across the country. In addition to the Opposition uniting against it, senior leaders of the party also believed that RSS chief Mohan Bhagwat’s statement on reservations, in the middle of the campaign, had done serious damage.

Sources claim Bihar had been on Shah’s radar ever since. Senior leaders were keeping a close watch on developments in the state. “An astute Shah was quick to notice the faultlines—the innate discomfort bet­ween allies Nitish Kumar and Laloo Prasad Yadav,” reveals a party leader. “The central leadership knows that Nitish is very particular about his ‘Mr Clean’ image, and also that his discomfort with Laloo stemmed from the various cases of corruption against him. Exposing Laloo was perhaps the best way of driving a wedge between the two allies,” the leader explains.

State BJP leader Sushil Modi was encouraged to get down to work and expose the Laloo family’s corruption. In a series of press conferences, he relentlessly dished out documents that he had dug up. “The Modi from Bihar did the job doggedly and successfully,” says a central BJP leader. Things had been building up to this denouement for the past three to four months.

As things unravelled and reached the tipping point with Nitish submitting his resignation to Governor Keshari Nath Tripathi, the BJP didn’t waste any time. In a series of lightning-fast moves, it extended support to Nitish in his “fight against corruption”. PM Narendra Modi took to Twitter to congratulate Nitish Kumar in less than 10 minutes of his resigning. Meetings bet­ween JD(U) and BJP leaders continued through the night and by next morning, Nitish was ready to take oath again as the CM with a new deputy in Sushil Modi. He was Nitish’s deputy previously too till the latter walked out of NDA four years ago.  The two are known to work well together.

With this move, the BJP has strengthened its control over the pol­itically crucial Hindi heartland. After a decisive win in Uttar Pradesh, a coa­lition government in Bihar will go a long way in bolstering PM Modi’s efforts to ­retain power in 2019. UP and Bihar tog­ether send 120 MPs to Lok Sabha. In the 2014 elections, NDA had won 104 of them.

Political observers say developments in Bihar could well be the beginning of the end of smaller regional parties. “With the BJP expanding its footprint aggressively, putting up a joint fight by other parties was seen as the only viable option to take it on. Now that model also appears to have failed. The leaders of smaller regional parties have failed to curb their individual ambitions. The smaller parties will either disintegrate or get subsumed within bigger ones. With Congress steadily losing its ground, as of now, only BJP appears to be a big party,” says a political commentator.