The grand little lady of music deserved a better book, but given how rare books on our musicians are, it's welcome. 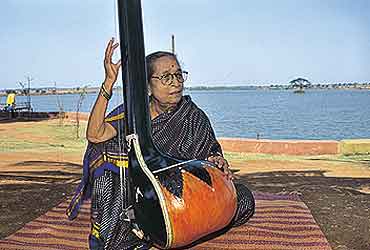 As a schoolgirl, she sang the welcome song at the only Congress session Mahatma Gandhi presided over. In her teens, her music was recorded by HMV. In 1936, she sang on All India Radio for the first time as a stand-in for Hirabai Barodekar. Thus began Gangubai Hangal’s journey on the road to musical greatness.

Gangubai has sat at the high table of Indian classical music for the last 50 years. Though much admired for the intensity and profundity of her music, she has never been an icon. A disciplined professional, her simplicity and generosity have endeared her to fellow musicians who call her ‘akka’ (elder sister). A sheaf of honours, including a Padma Vibhushan, haven’t gone to her head. She makes no bones about the fact that she has to earn in order to feed a large family.