The Bid For A Return Ticket 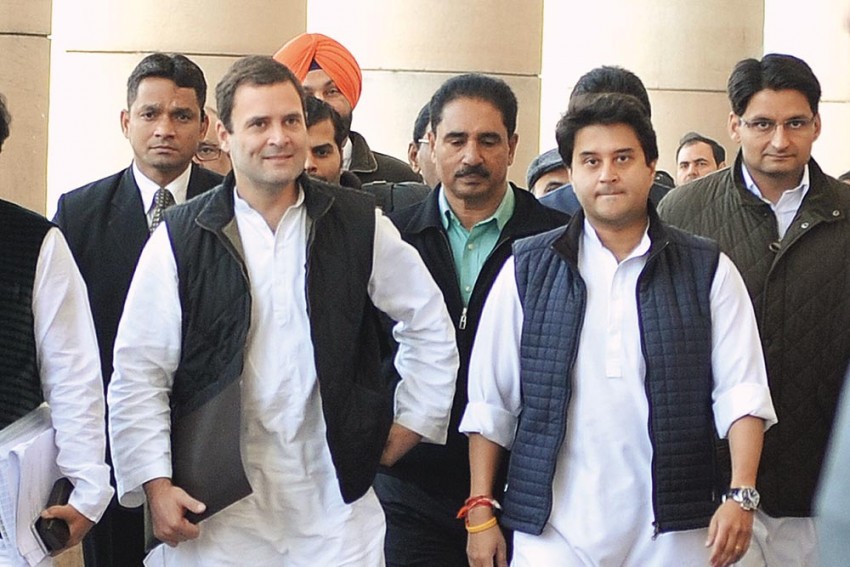 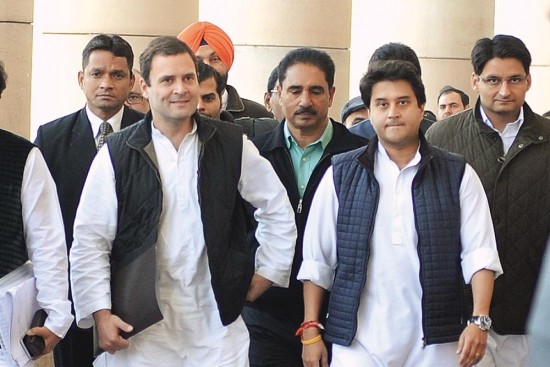 Before Rahul Gandhi left for Bahrain on January 7, his house at 12 Tughlak Lane—the Congr­ess’s new power centre—was abuzz with activity. The party’s communication department members and some office-bearers were fine-tuning the strategy for poll-bound Karnataka. The new party president was insistent that they must learn from the Gujarat experience and strengthen booth management. The larger message was clear: Karnataka must be retained at any cost and the BJP denied an entry into the south through the state.

General secretary in-charge of Karnat­aka K.C. Venugopal was sent to the state, while Mallikarjun Kharge, leader of the Congress in the Lok Sabha, and former Union minister Veerappa Moily were asked to stay put in their respective constituencies. Shashi Tharoor, who leads the All India Professionals’ Congress, will also head for the state on return from Bahrain, where he is accompanying Rahul. Communication department con­venor Priyanka Chaturvedi, who has set up base in Bangalore, is learning Kannada and tweeting in the local language, trying to persuade “modern, liberal and progressive” people to join her team.

“We are getting a tremendous response from the people,” she tells Outlook. “Hundreds of youngsters and professionals want to join us. The aim is to get more voices to represent an  inclusive India, which the Siddaramaiah government stands for. While countering the opposition’s (BJP) lies, we have to ensure our narrative is right. The brief, to revamp the communication and get fresh voices, has come from the party president.” So, as a tit-for-tat social media fight rages betw­een CM Siddaramaiah and BJP’s star campaigner, UP CM Yogi Adityanath, Chaturvedi’s team comes up with #HoggappaYogi or “get lost Yogi”. The Congress, though, may find it easier said than done as Yogi is expected to campaigning in Karnataka extensively. Of the eight states going to polls this year, Karnataka is the most crucial for both the Congress and the BJP—perhaps more for the Congress as it is the only big state besides Punjab under its control. In smaller Meghalaya and Mizoram, the inc­umbent Congress will have to fight off an aggressive and expansionist BJP this year. In the remaining poll-bound states, including Madhya Pradesh and Chhattisgarh, it will be a challenge to dislodge well-entrenched BJP governments. And, though the two rival parties have alternated in power in Rajasthan since 1993, wresting the state from the BJP may not be easy this time.

Clearly, it’s a tough fight ahead, but the Gandhi scion seems to be up for it. “Rahul has flagged three major tasks: ramping up the communication emanating from the party; strengthening the outreach of party workers down to the booth-level, with nearly eight lakh workers roped in to work in the booth committees; ironing out internal differences to put up a united fight.” Rahul has also exhorted party leaders to attack the BJP by raising the issues of agrarian crisis, failure to create jobs and poor economic indicators. 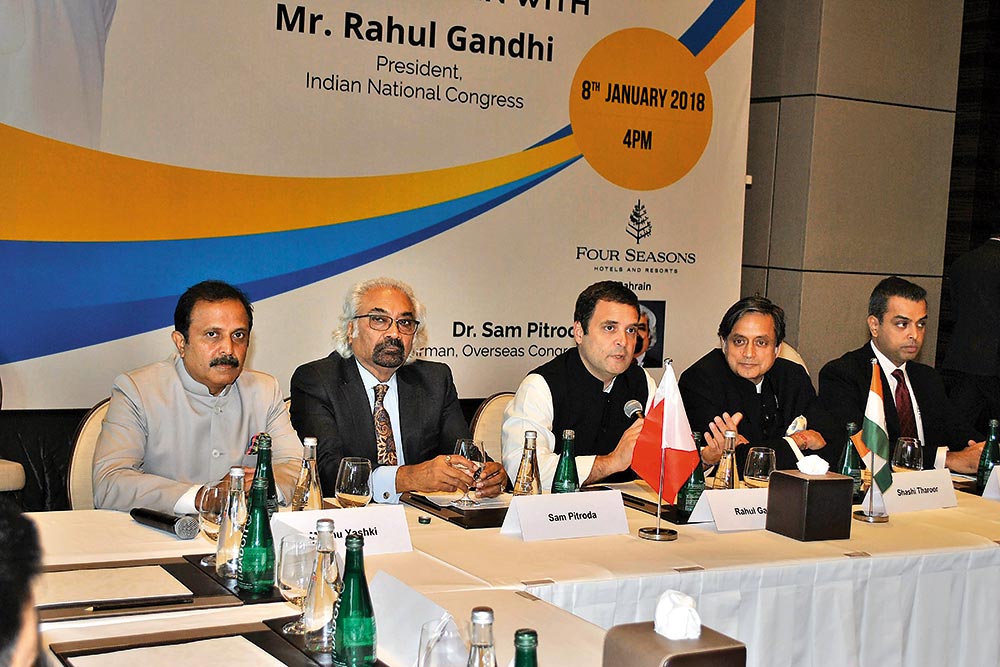 Resolving internal differences is partic­ularly significant in Rajasthan and Mad­hya Pradesh, where the Congress has a number of CM aspirants. “This will be addressed sooner than later,” says a gene­ral secretary. “RG (Rahul) does not beli­eve in shaking things up. He likes making incremental changes to avoid dissidence.” Perhaps, that’s why he has retained the presidents of all the Pradesh Congress Committees (PCCs), with the following caveat: “unless some decision is taken to replace them”. The general secretary adds that some organisational changes may happen towards the end of the year, closer to when Rajasthan, Madhya Pradesh and Chhattisgarh go to polls.

According to a young Congress leader, retaining the old PCC presidents is Rahul’s way of showing trust in some of those whom he had personally appointed in 2014—for example, Arun Yadav (Madhya Pradesh), Sachin Pilot (Rajasthan), Bhupesh Baghel (Chha­ttisgarh) and Ashok Tanwar (Haryana). Baghel’s appointment, in fact, had been announced in a separate statement issued by general secretary Janardhan Dwivedi, which, according to an office-bearer, means “Baghel is not likely to be changed even closer to the elections”. “RG is trying to create a semblance of leadership in the state where none exists since Amit Jogi’s expulsion from the party in 2016,” he says. Two additional working PCC presidents have also been appointed for Chhattisgarh.

Party leaders say the ‘working president’ formula may be used in other poll-bound states too. It started from Gujarat, where four PCC working presidents were appointed and given charge of Saurashtra, Kutch, Central Gujarat and South Gujarat, respectively. In Madhya Pradesh, too, the party is considering the appointment of four working presidents, one each for regions such as Chambal-Gwalior, Vindhya, Malwa-Nimar and Mahakaushal. “RG feels that such a formula may tone down the influence of senior leaders involved in power struggle in states like Rajasthan and Madhya Pradesh,” says the young leader.

Guna MP Jyotiraditya Scindia, who, along  with Kamal Nath and Digvi­jaya Singh, is one of the contenders for being the CM candidate in Mad­hya Pradesh, downplays the leadership issue in the state. “We are all working tog­ether. There’s no fight,” he tells Outlook. “If the Congress has to come back, then our individual interests have to be kept aside in the interest of the party. It is now or never for the Congress and people will see a different Congress this time. The aspirations of 7.5 crore people of the state depend on us.” He is confident that BJP rule under Shivraj Singh Chouhan, which has lasted three terms, will end and “his corrupt government will be dealt a severe blow”. Scindia accuses Chouhan of being “anti-farmer, anti-­women and anti-poor”.

Kamal Nath could not be contacted as he continues to be in his constituency in Chhindwara. He had earlier declared he is willing to fight elections under Scindia’s leadership. Digvijaya Singh, who has been CM twice, is in the middle of a six-month “spiritual and apolitical” ‘Narmada Parikrama’ and says he has no ambitions to be the CM candidate this time. So, while it seems the decks are clear for Scindia, sources in the party say nothing can be said for sure yet.

Retaining the state chiefs is Rahul’s way of showing trust in those he had ­appointed in 2014, says a party insider.

“Kamal Nath and Digvijaya Singh are not going to give up easily,” says a veteran Congress leader. “By the time of the next elections (2023), both will be over the hill. This is their only chance.” There is a similar situation in Rajasthan. Although it may appear that Sachin Pilot is the natural choice as CM candidate, being the PCC president for the past four years, there is still a slip between the cup and the lip. “General secretary Ashok Gehlot has been working quietly and diligently,” says the veteran leader. “He has impressed Rahul with the way he handled Gujarat elections as the in-charge. He has been chief minister of Rajasthan twice and may emerge to be the natural choice. So nothing is certain yet.”

Pilot, however, had made his intentions clear when he did not contest the Lok Sabha by-election from Ajmer, a constituency he had represented earlier and then lost in 2014. “He has sent the message that he wants to be the CM. For that, he will contest the assembly election,” says the veteran leader, adding that Pilot has been working relentlessly on the ground, travelling to all districts and constituencies of the state.

Skirting the leadership issue, Pilot says that the state Congress has been in election mode for the past four years—i.e., ever since he took over as PCC chief—and that CM Vasundhara Raje of the BJP is on a weak wicket. “The Congress has gained ground by doing remarkably well in the municipal elections,” says Pilot. “While in the 2014 Lok Sabha election, the difference between the voteshares of the BJP and the Congress was 26 per cent in fav­our of BJP, it came down to just one per cent in the panchayat polls.”

Known for his personal touch with the people and party workers alike, Pilot says, “I have been one of the few lucky Congress presidents in Rajasthan who has overwhelming support from the party and the people. The credit goes to all the party workers.” A senior Congress leader, however, points out that Pilot will need Gehlot’s active support in order to win. “These are important issues for Rahul to resolve—whether he will promote young leaders like Scindia and Pilot or go with the experienced ones,” he says. “Like what the BJP has managed to do, will Rahul be able to make a generational shift and helm a new shining Congress as he promised in his speech at Bahrain? How he handles these issues will decide how ready the Congress will be to take on the BJP in the 2019 Lok Sabha election.”