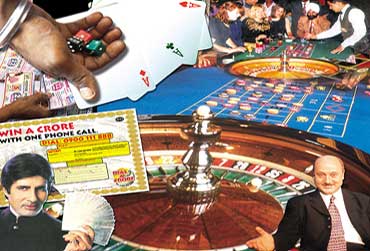 outlookindia.com
-0001-11-30T00:00:00+0553
Sprung from tall trees on windy heights, These rollers transport me as they turn upon the table.
Dearer to me the die that never slumbers Than the deep draught of Mujavan's own Soma.
She never vexed me nor was angry with me, But to my friends and me was ever gracious.
— Rig Veda

Is a deep-seated gambling instinct part of the Indian's genetic code? Was it always there, hidden in the deeper recesses of the mind, lying in wait with the patience of a python? For, suddenly, the trapdoor seems to have opened and Indians in lakhs and millions are looking for quick and easy money.
The first spark was provided by Kaun Banega Crorepati (kbc), which, though it does not involve gambling, immediately had millions of Indians who possibly did not know how many zeros a crore has wearing their fingers out dialling in from dawn to dusk in search of easy riches. Other channels have followed with their own shows and regardless of whether they are getting high viewership or not, they definitely are getting loads of aspiring participants. And now Indians have also discovered the gambling websites on the Net.
Plus, you can try your luck on phone-in services. Mega lotteries are on the anvil. And within a few years, several states in India could have real brick-and-mortar casinos. There are now six million Net users in India. And the number of surfers logging on to sites like www.Winvite.com, www. casino2000.com, the Betting newswire and the British Lotto is going up by the day. Pressure is mounting on the government to sanction casinos in cities like Agra, Udaipur and Goa (the last-named has one low-stake casino). Besides, lotteries are likely to make a comeback soon because of tremendous lobbying by interested parties who are talking about contributing almost Rs 2,000 crore in taxes to the national exchequer. The Maharashtra government will soon be setting up interactive kiosks all over the city of Mumbai where you can try your hand at the state lottery and know the result instantly. Indian cruise liners—with tempting casinos—are offering huge discounts to tap the country's five million annual outbound tourists. And on a completely different plank is a sizeable chunk of the Rs 50,000-crore fmcg market which is offering the moon in virtually anything and everything—from biscuits to flour to watches to fridges. Scratch it and check your luck. "Acquiring the tags of subtitles—appearances and wins on television shows or jackpot on the Net or through phone services—is now becoming very much part of the Indian psyche. And people do not see anything wrong in this because all games—surprisingly—have this element of quiz which makes it difficult to categorise them as gambling," says leading psychiatrist Dr Achal Bhagat.
Vivek Dhir, who heads the Indian subsidiary of the New Jersey-based World Phone International (wpi)—which started the Dial-A-Crore audio-text quiz where a caller plays a true/false format by phone which could mean daily, weekly and monthly wins, all leading up to the coveted Rs 1 crore figure—agrees. But he makes a difference: "It's not gambling but a game based on general knowledge." Dhir's deal with mtnl is that the latter picks up 50 paise of the Rs 1.20 revenue wpi generates for every two seconds a person spends on the line. There's more. Last year, the Indian capital was the only city where the telecom authorities offered this premium rate service. Today, it's available in more than 40 cities, an indication that callers are increasing by leaps and bounds.
Dhir would not mention how many are calling. But if jammed lines (midnight to midnight) are any indication, wpi's growth—despite the country's low number of std-connected phones—seems assured. And the money has started flowing with people picking up as much as Rs 25,000 to Rs 40,000 in one game. Dhir proudly displays a recent cartoon in a Mumbai paper which showed a beggar lamenting his lack of education near a hoarding which displayed the amounts offered in these quiz shows. "Dial-A-Crore was also in the cartoon. We have caught on within a short span of time," exults Dhir.
Dr Bhagat sees this craze sweeping the nation in a manner never seen before and feels that the luck-and-buck factor, in the coming years, will transcend the boundaries of television programmes, phone services and websites. But he would not classify this as a product of mere greed. "It's not greed. There's nothing new about greed. It has always been there, from the times of the Mahabharata. This is a change which Indians are experiencing over the last decade or so. Unlike the previous socialist-driven environment wherein giving up was considered a thing of style, the current system encourages acquisition as the call of the day. You need almost anything and everything to remain in control of your situation," he says.
Agrees Markand Adhikari, vice-chairman and managing director of sabe TV. It's been around a month that sabe started its big-prize-money gameshow Jab Khelo Sab Khelo and Adhikari claims that the channel has been inundated with more than 40 lakh calls. "The success of kbc has inspired our show. And the main attraction is definitely the money. Instead of money, if people were getting say points, obviously the show wouldn't attract such a crowd and the euphoria," says Adhikari.

But many still take the cautious route. "Money is definitely a factor but not the most crucial. It's one of the factors. The programme brings you face to face with the millennium's biggest star and also makes you a mini star, a celebrity across 30 million homes. So 200 million people are watching you. No wonder then kbc has become a national phenomenon," says Sumantra Dutta, executive vice-president (sales and marketing), Star TV. But Dutta admits: "Money is a strong force for people to get on the show."
"The luck element in the gameshow is at the very initial stage. But thereafter, the quiz element comes in and remains till the end. But yes, money is a factor, a very, very strong factor. But surely you cannot equate television shows and premium rate telephone services with gambling on the Net," says quizmaster Derek O'Brien, who is developing the quiz element for a host of channels like Zee, Sun and Sony. Adds a Sony Entertainment TV (set) insider associated with the production of soon-to-be-telecast Chhappad Phad Ke: "There is a great debate currently on within the channel because the programme's total production budget is coming to something like $10 million, which is just $3 million less than the amount the channel spent on total programming last year." set officials—despite repeated calls—remained tight-lipped over the exact amounts to be offered in the show. Whatever that amount is, it's clear that for the channels, these shows are the biggest gambles they have ever taken.
One man who is laughing all the way to the bank in the easy-money craze is G.D. Binani, ceo of Dialnet, which provides teletext services for a host of channels telecasting money quiz shows. "This is something which has been in operation in the West for over a decade now.But for Indians, this is something totally new. Take the case of kbc. When the lines were on, more than 3,00,000 to 4,00,000 calls jammed the lines, prompting the producers to close the current schedule. Other channels also have high call rates," says Binani, whose company has handled more than 15 million calls for kbc. Interested in knowing how many calls Dialnet can handle a day? Over 2 million! No wonder then that the company is negotiating contracts with a host of multinationals like espn, American Express, Transworld International, Coca-Cola, Citibank and local giants like the UB Group, Unit Trust of India, Wipro and the Taj group of hotels for their promotional teletext packages. "They all are getting innovative packaging done to lure the consumer: money, gifts, everything. This is the new craze. You earn anyway. Either cash. Or gold. Or holidays or products," says Binani.

And then there's the Net. As global credit cards have become common in India, more and more Indians are using them to place their bets in online casinos. "And it's not like those Funbets instant click messages which you get every morning after you have subscribed to sites like Winvite.com. This is very tempting and many often end up losing some thousands of rupees," remarks Ashish Dutta, a regular surfer.
The Modis, whose tryst with television started with international distribution tie-ups with Walt Disney and espn, wanted to set up a joint venture with the London-based National Lotteries for the six-digit game and, in the process, try their hands at big-time money. The first proposal, for which the group even called for presentations from a host of advertising agencies, was summarily rejected by the government (ostensibly because lotteries are still on the finance ministry's banned list for foreign direct investment) but the Modis are still optimistic that the government will—someday—sanction their demand. During separate meetings with top bureaucrats of the finance ministry, the business house has explained in detail how lottery was an extremely misunderstood word in India and that globally, lottery money was used for a host of philanthropic work (for instance, a significant part of lottery proceeds is apparently often routed for maintenance of National Heritage sites in Britain, and graduate scholarships in Britain and the US).
"The money factor always works wonders... it slowly draws the crowds and then it starts swelling. But today, even if the nation lacks classy casinos, the options are many," remarks Shona Adhikary, a travel consultant with the Welcomgroup Heritage hotels. Adhikary should know. Consider the case of the Goan government, which introduced electronic slot machines and even roulette games in five-star hotels after amending the Goa Public Gambling Act (1976). But the move failed to woo foreigners, who stayed away calling it "kids' games". The government again amended the act and allowed table games and gaming on board offshore vessels. And it's perfectly legal. The cruise liners suspend casino operations once the vessel is in Indian waters and resume the moment the liner moves out of range.
So it's on. "Earlier, Indians would gamble en masse only during Diwali," says Bhagat. "From now on, it's going to be a round-the-year business." Logging in, dialling up, scratching biscuit packs, Indians want to make more, faster. All they are looking for is a bit of luck. The Rig Veda again:

The gamester seeks the gambling-house, And wonders, his body all afire, Shall I be lucky?
Still do the dice extend his eager longing, Staking his gains against his adversary.
Dice, verily, are armed with goads and driving-hooks, Deceiving and tormenting, causing grievous woe.
They give frail gifts and then destroy the man who wins, Thickly anointed with the player's fairest good.