No wonder half a dozen eunuchs are fighting the elections this time. If you have to be male and odd-looking to win, you might as well go half the way. 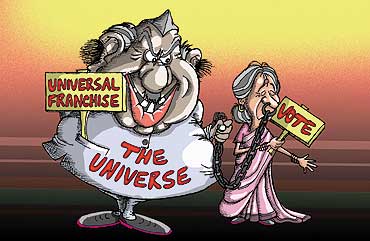 outlookindia.com
-0001-11-30T00:00:00+0553
The more democratic we seem, the more feudal we in fact are. The cacophony of elections gives us the false hope that the entire cross-section of Indian society is caught up in that noble exercise known as universal franchise. Universal? Never. In these assembly elections, less than ten per cent tickets have been given to women. There are virtually no important women contesting anywhere. Ex-SGPC chief Bibi Jagir Kaur, trapped in a bizarre controversy over her own daughter’s death, is a supplicant seeking to salvage her reputation. Rajinder Kaur Bhattal is waging a lonely battle against the male Congress establishment.

And Mayawati, in the long tradition of South Asian women politicians, has been able to enter politics only because of an alliance or proximity or family relationship with a powerful man. From Indira Gandhi to Begum Ershad to Sheikh Hasina to Chandrika Kumaratunga, to Benazir Bhutto, to Jayalalitha, to the Scindia princesses, a woman can aspire to a political future only by clinging to the coat-tails of her father, husband, brother or friend. The only exceptions are Uma Bharati and Mamata Banerjee who have to be "mad" to be considered valuable. "Insanity" and "unpredictability" are often valuable devices to inspire respect: the Kali syndrome. Uma Bharati must sound more extreme than anyone else, Mamata Banerjee must bite and kick and scream.

But it’s the men who are everywhere. The mammoth politician with three frizzy hairs standing on his shining scalp. The concave tycoon with the gummy smile. The mass leader with the yellow eyes. Indian men must be the ugliest in the world. Ugly and oppressive at the same time: a visual assault. Thus Indian women must be doubly pitied. To be oppressed and marginalised is one thing, but to be oppressed and marginalised by goggle-eyed, gap-toothed fatsos is not just an injustice, it’s a crisis of aesthetics.

Ugliness is a crucial weapon of male dominance in India. It stuns female opponents into confusion and fear. It induces a sort of defeated resignation which the men can then quickly take advantage of. At the moment of abduction, poor dear Sita probably never had much time to react. The sight of her ten-headed kidnapper must have paralysed her.

Yet the visually experimental male army controls everything in our harshly feudal land. The government, TV talk shows, high-powered discussions and elections. No wonder half a dozen eunuchs are fighting the elections this time. If you have to be male and odd-looking to win, you might as well go half the way.