'The Best Way To Fight Terrorism Is To Not Be Scared'

The New York mayor in 2001 is widely credited for helping the city heal in the post-9/11 period. On lessons Mumbai and India can learn from NYC 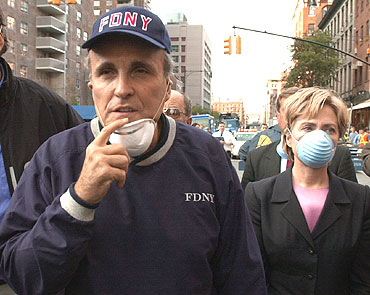 outlookindia.com
-0001-11-30T00:00:00+0553
On September 11, 2001, Rudolph Giuliani was about to finish his second and last term as the Mayor of New York City, when Al Qaeda terrorists flew two planes into the twin towers of the World Trade Center. In the days and weeks that followed, Giuliani was seen everywhere, attending funerals of police officers and fire-fighters, on television, and talking to the citizens on the streets. He is widely credited for helping New York City heal in the post-9/11 period. Aseem Chhabra spoke to the former mayor, now a private businessman, on the phone about lessons Mumbai and India can learn from New York's post-9/11 experiences.

There has been a lot of criticism of the politicians in India, following the terrorist attacks on Mumbai.  I was in New York City and I saw you bring the city together after 9/11.  In your opinion what were the elements of leadership that you projected that helped calm the people of the city?

First of all you have to make sure that everything is being done to prevent a possible additional attack.  There has to be a significant increase in security.  For me that was a big issue right after September 11, because we did not know how many more attacks would take place.  And then you have to devote attention on making sure you can save as many lives as possible and then making sure that you reconstruct as quickly as possible so people are able to come back to what you would call normal living.

I am not in India right now so I cannot assess this very well, but I remember after September 11, I realized it would take people a while to get back.  I remember one night I went to a wake in Brooklyn.  I was very tired, but I wanted to take a walk through a regular neighborhood.  I asked the police to let me out of my car and I walked four or five blocks.  I noticed that the restaurants were empty and everyone was home watching their televisions.  You could look in the windows and see people huddled around their televisions.  And I realized that they needed time to process all this.  But I kept urging them to come back to work, to businesses

We did everything to get the stock market back.  The stock market was affected because the attacks took place in lower Manhattan and there was no electricity.  But they got back by the next Monday.  I tried to get as many things to normal as quickly as possible, get the schools, for example, back to normal.  I remember Broadway took a few nights off and I urged them to go back and have plays, so that people would have something to do to get their minds off.

You know what I learnt from it was that people recover at their own pace.  Some people were ready to come back in two or three days.  Some people needed two to three weeks and others needed longer.

Now I see the Leopold restaurant had the reaction that I was looking for.  They came right back by Sunday, if I read the article correctly.

I have this feeling that there is an innate sense -- and I can feel some of that as I am reading about India.  You've got to stand up to these terrorists.  You have to figure out what are they trying to do and we have to do the opposite.  What they were trying to do was to as much as possible cripple Mumbai.  Not physically – the city is too big for them to destroy the city.  This is not like the Second World War when they can bomb London for days and days.  This is a quick, massive shock attack.  What they really want to do is to cripple your spirit and scare you.  The best way to fight back is to not be scared.  The best way to say is ‘I am going back with my life as normal.’

So how did the city heal?  The healing process took its time.  There were a lot of lives lost.  There was a lot of crying.

You have to let that happen.  If you feel like crying, you should cry.  If it will take you longer to come back, then take longer.  But if you can get the critical mass to come, that is important.

I learnt that years earlier from the mayor of Jerusalem, who is now the Prime Minister of Israel and a friend of mine.  I remember his city was attacked by bombers who bombed buses and I called him up and asked what can I do to help and he said what you can do is to come here and ride the buses with me.  And I remember that was really important to show the city is back doing what it normally does.  What the government has to do is to make that happen. It has to show to people that they are doing a lot to make things safer.

In your opinion what has kept us safe post-9/11?  There have been no attacks on the US soil, but the terrorists have attacked other cities – Bali, Madrid, London and Mumbai.

I was in London when the attacks happened.  I was half a block away from the Liverpool station when the first bomb went off and it was like re-living September 11.

The thing that has kept us safe is intelligence.  In the particular case it didn’t work, but how many times does it work?  A lot!  In other words, you cannot evaluate intelligence on being 100% accurate.  Because it cannot be 100% accurate.  But the intelligence efforts post-September 11 have been much better than before that.  The gathering of information, the interception of these groups, the arrests of people who might be involved, sometimes the military actions in Iraq and Afghanistan, these all have impact on a lessening of the number of attacks.

The day this was happening in India, there was a warning about the subways in New York.  Now I am not privy to that information any more.  But that kind of warning comes from intelligence gathering.  You wouldn’t get that warning 10 years ago.  We weren’t gathering intelligence as effectively.

As New Yorkers, we have gotten so used to seeing police presence at subways stations, so I had no idea that there had been a warning until I heard about it on television.

That’s good, because the police in New York have become very well trained in looking for the precursors to terrorist activities – the things that indicate that something might be suspicious, somebody might be planning a terrorist act, they have become very good at that.  It doesn’t mean – God forbid – that you do not have a mistake every once in a while, and things will get through, no matter how good you are.  Look, the intelligence in the UK for the last 20 or 30 years has been as good as it gets.  They have been dealing with terrorism for a very long time, longer than the United States and they still missed that attack in 2005.  But they caught the one involving the airplanes.  Just think, if that had happened!  If I remember correctly, 10 or 11 planes would have exploded mid-Atlantic.

You have been a lawyer and a prosecutor.  There are groups that criticized the Bush Administration regarding the Patriot Act, that our rights were compromised.  What is your reaction to those criticisms?

There is no question, of course, that there is an impact.  But I believe that one of the reasons we have been safe in the United States is the Bush Administration.  I believe their reaction immediately after September 11 in imprisoning a certain number of suspected terrorists, in cracking down on the movement of money, in putting so much effort on intelligence gathering, including some of methods that have been criticized -- about wiretapping and surveillance.  In London, all the cameras -- one of the elements that calmed things down in London right away was immediately capturing the people on camera who did it.  Even though they were not able to stop the event, but they were able to capture them because of the surveillance cameras.  Who knows how many acts of possible terrorism are interrupted when you have that kind of camera surveillance?  You pay a price in privacy for that.  But that price is worth it when you could have stopped an event like in India last week.

So what advice you would give to the citizens of Mumbai and India at a time like this?

I would advise them to urge their government to learn lessons from this. Be more vigilant.  Use this as a method of training the police more effectively and then go about your life.  Because with all of this, the chances that the terrorists are going to harm you are very small.  When you consider all the harm that happens to us in life, the other things that can happen -- the accidents, other crimes.  What they are trying to do by what the terrorist call spectacular acts, they are trying to leverage their limited ability to do damage and make it much worse.  They have 10 or 20 or 30 people -- they can only do a certain amount of damage.  They do it in shocking way, to have a much bigger impact.  They are trying to get to our psyche, to our sense of what our society should be all about.

People should go about their business and show the terrorists that Mumbai will come out of it.  I remember the night September 11 happened, I said that the people of New York will come out of it and be a stronger city.  In a way, in addition to intelligence, military action and homeland defense that is another way of showing them that their attacks don’t stop you.  They don’t have the impact that they believe they are going to have.  I think that is what has happened over a period of time.  They attacked us and they thought they could cripple us.  They hurt us, but New York City became a stronger city -- more populated, more tourists, less poverty.

After September 11th, the tourism industry in New York was impacted and you asked people to come to the city. Would you suggest a similar plan for Mumbai?

We got one of the major advertising agencies to do television ads for us and we got a bunch of celebrities appear in the ads -- Barbara Walters, Yogi Berra, Henry Kissinger, inviting people to come to New York. And we got floods of people.  It was terrific!  I saw Fareed Zakaria last night on television commenting, that he had a trip planned to Mumbai in two weeks and he was going to go.  I thought that was a very good thing to say.

If you were invited would you also go to support Mumbai?

Sure.  Absolutely!  I was just there.  I just got back from New Delhi – left late Friday (November 21st).  I was there on business.  I have been to Mumbai and Delhi before.  I love it.  I know the Taj hotel in Mumbai and in Delhi too.  I think it is one of the most beautiful hotels in the world.

In fact I was telling people that I saw a real improvement in Delhi in the two years.  It looked like there was a lot of work being done in the city, which seemed a good thing, given all the worries about the economy.

A slightly edited version of this appears in print

Only The Dark Skyline Joined Our Ghettos Together