The Best Of The Rest 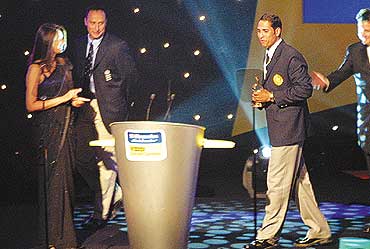 Best Batting Performance of the Century
V.V.S. Laxman - 281 v Australia, Calcutta, March 13, 14 and 15, 2001
India had lost the first Test cravenly in three-and-a-half days. History seemed to be repeating itself when, in the second Test, India followed on after falling short by 274 runs. Laxman walked in at 52 for 1 and played an incredible innings against the best bowling attack in the world. A stunning combination of fluid grace and clinical aggression, Laxman's innings not only won India the match but restored a nation's faith in its cricket team. In the process, he also notched up the highest Test score ever made by an Indian in Tests. Every Indian spine still tingles at the Calcutta memory.

Best Bowling Performance of the Century
B.S. Chandrasekhar- 6 for 38 v England, The Oval, August 23, 1971
England had led India by 71 runs in the first innings and seemed to be cruising towards easy victory when Ajit Wadekar handed Bhagwat Chandrasekhar the ball. What followed was a nearly mystical bowling spell that ripped through the heart of the English batting. One hundred and nine deliveries, six wickets, and England were all out for a mere 101, to set India up for its first Test and series victory ever in England. Chandra's bowling that day made the most hard-nosed rationalist believe in the supernatural.

The Indian Team of the Century
India at the World Championship of Cricket, 1985
Srikkanth and Shastri to open, followed by Azhar, Gavaskar, Vengsarkar, Amarnath and Kapil. Madan Lal, Binny and Chetan Sharma to share the new ball with Kapil. The magic of Sivaramakrishnan and the fiery Sadanand Vishwanath behind the stumps. In every match India played, it looked like the winner right from the word go, and they won every game with panache. In every game, except the final against Pakistan, India also managed to dismiss the rival team.

The Spirit of Cricket
Gundappa Vishwanath
When Vishy knew he was out, he walked, without waiting for the umpire to decide. He never questioned an umpire's decision. Except when it was against Bob Taylor of England, and Vishy knew Taylor wasn't out. His recall of Taylor in the Bombay Test in 1980 was one of cricket's greatest acts of sportsmanship. India lost the Test, but the values enshrined in the game of cricket won.

Special Achievement Award
Syed Mushtaq Ali
Keith Miller once called him the Errol Flynn of cricket for his exhilarating style. A swashbuckling opener and half of the legendary Merchant-Mushtaq opening duo, Ali was the most popular Indian player of his day. In a career truncated by World War II and capricious selectors who disliked his outspoken honesty (fans once gheraoed selection committee chairman Duleepsinhji and forced Mushtaq's recall to the Indian team), Ali played only 11 Test matches, and scored two memorable hundreds. But his name still brings a happy smile to the faces of any Indian who was fortunate to have watched him dancing down the crease to English fast bowlers and hoisting them over mid-on.

People's Choice Award
Sachin Tendulkar
Who else could it be?