We're finally hitting our stride. And WACA will be playing on the Indians' minds. 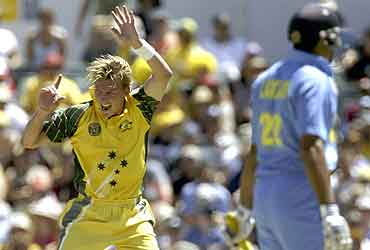 outlookindia.com
-0001-11-30T00:00:00+0553
As the culmination of a month-long tournament approaches, what has gone by has little relevance. However, the satisfaction of ending the league stage with a convincing win has given us some momentum. The Perth game was crucial for two reasons. One, it was the first time in the one-day series that we prevented the Indians from building partnerships and ensured that we restricted them to a small total. Two, the WACA wicket gave Brett Lee the kind of support he needed to turn the corner after his return from injury. Brett had been working hard, keeping to himself and focusing on bowling fast. When he came to Perth, the very sight of the wicket pumped him up, and it was great to see him hit the high 150s regularly. In fact, it was pretty evident that this was the kind of wicket—hard, fast and bouncy—that we had been trying to catch India on right through the summer. So when the chance came along, our bowlers grabbed it with both hands.

Perhaps, we could have played our Tests on similar wickets as well. While it would be difficult to replicate a WACA wicket in Adelaide and Melbourne, I certainly thought the wickets at Brisbane and Sydney could have been quicker, both for the one-dayers as well as the Tests. We are now back to the more batsman-friendly wickets of mcg and scg, but hopefully Brett and the rest would have carried some confidence over from their performance at Perth.

Midway through the tri-series, I had said that we were improving with every game, and just before the finals, we have reached almost our best form. The Indians will have some work to do if they want to catch up with us. It is very difficult to beat Australia in Australia, and the Indians claim to have done well this summer solely on the basis of one Test win and one one-day win. This is not much considering they have played four Tests and four one-dayers so far. Add to this the fact that as a team, we generally reserve our best for the finals. Our record in finals is exemplary against all sides, but against India recently, it has been perfect. Recent results always stay with a team, and the World Cup finals and TVS Cup finals in India will both be fresh in the mind of the Indians.

The area we need to improve is in the middle order. It is disappointing not to have Michael Bevan in our side, since he is the linchpin in the middle order, and Damien Martyn has been struggling as well. Martyn is a good mate of mine and we have been speaking about his lack of runs right through this week. He is really hitting the ball well, and evidence of this was there to see when he opened the batting in our last game against Zimbabwe. He batted beautifully to get to 42, but then got dismissed. I am still confident that a big score is not too far away, and he just needs to stay at the wicket for some time. Our allrounders like Symonds, Clarke and Harvey have all been pretty useful in the middle order, so hopefully they will help us tide over Bevan’s absence.

It really depends on the top order to ensure that our middle order is not exposed too early, and till now Matthew Hayden and Adam Gilchrist have been outstanding in this respect. Whatever happens from now on, it will have to be said that Gilly has exhibited some outstanding strokeplay right through this series. Ever since he scored 172 in Hobart, he has been unstoppable. His partnership with Andrew Symonds when the score was 39 for three was remarkable because it showed the self-belief of both the players as they did not get defensive even in a potentially tricky situation.

Personally, I’m feeling a lot fresher after my break in Perth. I went home and spent some time with the family, so now I feel hungry for runs and ready to go out and get them. It has been our policy to give a player some time off whenever it’s possible. Having now experienced a break myself, I realise how therapeutic time off from the game can be.

The Indians, on the other hand, have tapered off a bit over the last couple of games. Sachin Tendulkar and Virender Sehwag have not done much in either game after their injury lay-off. This would definitely be worrying both these guys who are trumpcards for their captain. Keeping pressure on both of them will be one of our primary aims in the finals. The captain must also be a little worried that he has not done anything of note since the first one-day game at Melbourne. As a team, we always try to target the captain so that we can restrict the opposition. As captain, it must be hurting Ganguly that he is not among the runs, and we have to ensure that we keep him under pressure.

In the finals of such a long tournament, particularly after a Test series, there is plenty of physical wear and tear on both sides. This is why the finals are generally more of a mental game. The team that is stronger mentally will win, and important psychological gains will be made in the first 15 overs of every game. If the batting team gets off to a flier, it might make things difficult for the team batting second. On the other hand, a few quick wickets can put the fielding team way ahead. A best of three finals can also be very deceptive. Practically speaking, it is very difficult for a team to come back from a 0-1 deficit to win the series. Both teams will be aware that the Melbourne game will be really decisive, if viewed from this perspective. We have slowly and steadily worked up some good momentum right through the series. Even without playing our best cricket, we have won six out of our seven completed games. This is testimony of how well we have been doing in this form of the game for the last couple of years.

We will not try anything very different in the finals, but we do have a few plans for some of the Indian batsmen. A few of these were evident at Perth itself, and hopefully our strategies will be as successful in the finals as they were at the WACA. In an earlier article, I had mentioned that we always see fielding as a reflection of how the team is feeling. There has been a great improvement in this aspect of our game, with Symonds and some of the other guys being truly special.