The Benefits Of Truce

The ceasefire might just ensure militant's participation in elections 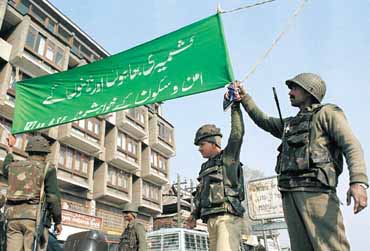 outlookindia.com
-0001-11-30T00:00:00+0553
When the Cabinet Committee on Security Affairs met on November 19, two important reasons guided it to favour a unilateral ceasefire coinciding with the month of Ramazan. One, it was believed the ceasefire would consolidate public pressure on the Hurriyat to negotiate for peace. Two, it was expected to increase international pressure on Pakistan to moderate its stance. Prime Minister Atal Behari Vajpayee announced the ceasefire the following day.

The timing was also considered apt as the security forces have neutralised 600 militants between September and November 26; sources say this year 1,737 militants were killed, exceeding the previous highest of 1,651 in 1994. With the snowy winter months limiting major militant movement from across the border, the committee believes various Kashmiri leaders would be amenable to peace manoeuvres.

That there was no tangible external pressure to announce the ceasefire shows the government has reasonable autonomy to handle the Kashmir problem. Sources say US Assistant Secretary of State Karl Inderfurth's endorsement of the ceasefire underlines the fact that Washington does not favour the so-called tripartite talks on Kashmir. India hasn't rejected the composite bilateral dialogue on all outstanding issues with Pakistan; all it wants is a demonstrable Pakistani effort to end cross-border terrorism. This has now acquired strong international appeal.

Sources say the ceasefire is part of the wider political process to ensure participation of Hurriyat leaders in the 2002 Kashmir elections. That's why Hurriyat leaders were released from prison earlier this year. The question is: will they participate? This time, the Hurriyat hasn't rejected the ceasefire, unlike the July initiative which was wrecked at Islamabad's insistence. The Hurriyat's dilemma is to what extent it will compromise its interests for Pakistan's. With the possibility of the Hizbul Mujahideen (read Majid Dar faction) outflanking the Hurriyat looming large, sources say nobody wants to be left out of the electoral processes. At least for older Hurriyat leaders, it would be "the last best chance".

No wonder Abdul Ghani Lone at a rally in Srinagar on October 8 blamed both India and Pakistan for Kashmir's misery. Such open criticism of Pakistan testifies to Hurriyat's growing disenchantment with Islamabad. Mirwaiz Umer Farooq has also been consolidating his constituency, mostly in Srinagar's Jamia Masjid area. Similarly, Yasin Malik is trying to strengthen the jklf by reaching out to Kashmiri pandits. Recent Hurriyat meetings have seen an expanded participation, with second-rung leaders encouraged to articulate positions senior leaders don't openly admit to.

Sources say Syed Ali Shah Geelani now remains Pakistan's "only reliable man". They point out that that at a Hurriyat meet in late October, Geelani had said, "If you see me as an obstacle, please remove me." On November 8, Hurriyat members met Pakistan's High Commissioner in Delhi for four hours during which both Lone and Yasin reportedly made a strong pitch for a Pakistani rethink on Kashmir, saying it would be difficult to continue defying popular local sentiment favouring an end to strife.

In sum, the government hopes the ceasefire will harden the divide between the secessionist groups in Kashmir and those in Pakistan.