SIT says they have incriminating evidence against the accused. Jayendra Saraswati's hand-picked successor is absconding. Will the government use this to take over the math? Updates 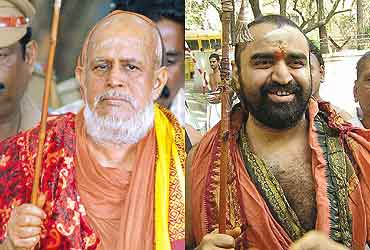 outlookindia.com
-0001-11-30T00:00:00+0553
The man Jayendra Saraswati identified as the new Shankaracharya of the Kanchi math has virtually disappeared. Till recently, the 54-year-old chartered accountant based in Mumbai was known as Thyagarajan. But he was renamed Gnanaprasendra Saraswati, after being given diksha by Jayendra. It is believed that the senior pontiff was grooming Gnanaprasendra even before the Sankararaman murder case.

After Jayendra's arrest, Gnanaprasendra faced some hostility from the junior pontiff Vijayendra Saraswati and his brother M.K. Raghu at the Kanchi math. This is why he decided to go underground for his own safety and has since not surfaced. Devotees have been looking for him. But very few have even a clue of his whereabouts. It is believed that the prospective seer may come back after the dust settles over the case. The potential Shankaracharya originally hails from Maddur in Shimoga district, Karnataka.

According to math sources, Gnanaprasendra is not very enthusiastic about the responsibility thrust on him by Jayendra at such an unpleasant time—another reason for his disappearance. Of course, Vijayendra, who is also charged in the murder case, can do little to stop the senior seer's wishes to anoint a new successor. Also, his brother and ally Raghu's detention under the Tamil Nadu Goondas Act makes bail impossible for three months. In appointing Gnanaprasendra as the new math head, Jayendra wants to ensure that even if the two pontiffs do not get convicted, Vijayendra will not inherit the mantle. "The senior acharya was planning this irrespective of the Sankararaman murder case because he resented the manner in which Vijayendra and Raghu were running things," says a math source.

A new pontiff has now become necessary in the light of the two existing Shankaracharyas figuring as accused in the murder trial. With 181 of the 183 bank accounts of the math in Kanchipuram frozen by the state government, the takeover of the headless math by the Hindu Religious and Charitable Endowments (HR&CE) department, citing its non-functioning, is imminent. At this juncture, it is believed that having a new untainted Shankaracharya as a math head might curb the government's takeover bid.

As things stand, the government would be well within the law in taking over the math though Jayalalitha has repeatedly asserted that it was never her intention. According to the Tamil Nadu HR&CE Act, 1959, all religious bodies "shall be subject to the superintendence and general control of the commissioner for securing proper administration and to see that their income is duly appropriated for the purposes for which they were founded."

A commissioner is empowered to file a suit to remove institution heads if need be. Section 59 of the Act, which deals with maths, says a mathadhipathi (math head) is only a trustee and a suit for his removal can be filed by the commissioner or "by any two or more persons having interest and having obtained the consent of the commissioner". This is precisely what Sankararaman pleaded for in several of his 39 letters, some of them addressed to the HR&CE department.

Jayendra, meanwhile, is insisting on camping at the Kalavai math, 42 km from Kanchipuram. It is unlikely that when Vijayendra gets bail, he will join his senior. Nor will he be able to re-enter the Kanchi math. Says a disillusioned senior math functionary, "Vijayendra may go to Ponpadi near Tiruttani and rest. Like Jayendra Saraswati has Kalavai under his control, Vijayendra too has some areas under his belt. He may go to some such place."

The investigation in the murder case has been concluded. The special investigation team has filed a 1,965-page chargesheet. The magistrate is expected to give a copy of the chargesheet to all the 24 accused on February 6.The police team is confident of conviction for all the accused. Now that Ravi Subramaniam, originally the third accused, has turned approver, he has been absolved of all charges. His 20-page statement to the magistrate throws light on the alleged nature of the conspiracy and the modus operandi of the crime. It also reveals some of the activities that went on in the math.

Such is the damning nature of the evidence in the chargesheet that those who questioned the probe as being politically motivated have suddenly gone silent. Among those questioned by the sit were 40 women witnesses who had links with the math. One accusation levelled at the investigating team was that the women were dragged into the case to tarnish the image of the math. When asked why the sit probed alleged sexual scandals unconnected to the murder, Kanchipuram SP K. Premkumar offered this explanation: "Jayendra Saraswati is the main conspirator. The character and antecedents of the conspirator are crucial factors. A conspiracy has three aspects: motive, preparation and conduct. Jayendra Saraswati's character is therefore a crucial factor." Approver Ravi Subramaniam, in fact, details how he procured women for the two pontiffs and talks of a separate entrance and chamber for such women. A supplier of "blue films" to the math has also given a statement under Section 164, which also forms part of the chargesheet.

The investigations also revealed that Jayendra was being blackmailed by some of the underworld operators he hired. For instance, after history-sheeter Kathiravan's services were used in the former math associate S. Radhakrishnan's assault case in 2002, Kathiravan started blackmailing the senior pontiff. In March 2004, when Jayendra was attending the Mahamaham festival in Kumbakonam (dubbed the Kumbh mela of Tamil Nadu), Kathiravan pestered him for money. Jayendra then asked R. Sethuraman, vice-chancellor of the Thanjavur-based deemed university, Shanmugha Arts, Science, Technology & Research Academy (SASTRA), to procure Rs 2 lakh urgently. Sethuraman arranged for bundles of Rs 1,000 denomination and has testified to this effect before a magistrate. The money was paid to Kathivaran.

Meanwhile, there is some evidence on why the Tamil Nadu government trained its sights on Jayendra. According to sources, the senior pontiff hobnobbing with political leaders and promising jobs and transfers did not go down well with the powers-that-be. "Jayendra was projecting himself as an alternative power centre. As a person who could influence even decisions in Delhi despite a change of government. This upset many people in Chennai which is why the AIADMK government acted, although the police was aware of what was happening in the math for close to two years," says a senior bureaucrat in the government.

Highly-placed police sources told Outlook that soon after the assault on S. Radhakrishnan, his wife and an attendant at his residence in Mandaveli, Chennai, an investigating officer of deputy commissioner rank attached to the Adyar police station had established the link between Jayendra and the assailants. In fact, the hirelings arranged by Appu alias Krishnaswamy (prime accused in the Sankararaman murder case) had been questioned and arrested. But when the Kanchi pontiff got wind of this development, he reportedly pulled strings in the government and ensured that the case was hushed up. Soon the investigating officer was rewarded with a transfer. Clearly, the political will to "allow the law to take its course" was not there in 2002.

Right now, with both the seers effectively out of action, the math is headless. Many devotees would be happy if a new Shankaracharya gets appointed so that the math can be brought back on an even keel. Only if someone credible enough emerges.

The Lass Got Class