The river is synonymous with outlawhood. It also supports a hardy, varied wildlife. 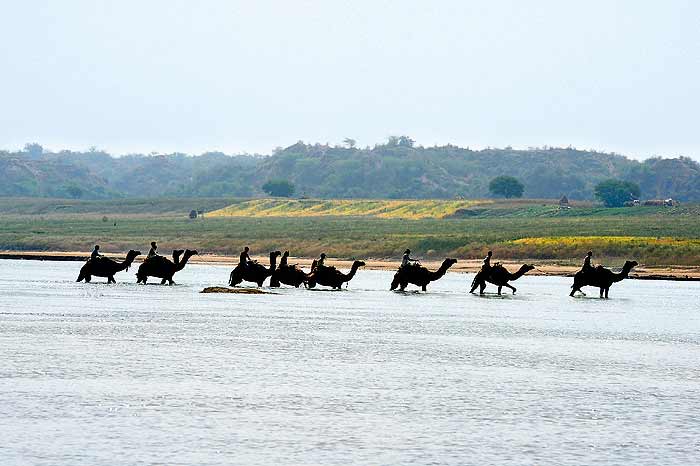 “Chambal? You mean the dacoit haunt? What’s to see there? Is it safe?” are likely responses from friends if you mention a holiday in the notorious ravines of Paan Singh Tomar country. Turns out that dodgy reputation has bred a kind of happy exclusivity for serious birders and photographers, who’re perhaps the few people party to Chambal’s unspoilt wildlife fest. The river safari on the Chambal, such a departure from regular jeep safaris, is the main draw in this national sanctuary. In season, gliding over the clear blue river, you sight dwindling species of the Skimmer bird, the gharial, the muggur (or crocodile), the red-crowned roof turtle and even the Gangetic dolphin if you’re lucky.

Even so, few have realised Chambal’s potential as a tourist magnet, with its unusual landscape of stunning ravines and rare wildlife that includes Saras cranes and blackbuck. Chambal Safari Lodge, in village Jarar, is pretty much the only place to stay on the Uttar Pradesh side of the river (20 km away), unless you consider Agra as an option, about 90 km from the river. But if you’re not on a tight budget, this sprawling, 120-acre plantation of old trees and extensive farmland, with rustic, eco-friendly cottages does well for a meditative holiday. Here, you’re in the company of resident hares, nilgai, wild cats, hyenas and hundreds of tweeting birds.

The ravines seem to seek the horizon, seem barren, seem bare. But they teem with nilgai, wild cats, hyenas, hundreds of birds.

But come afternoon, you’d want to be by the river, when the birds, the gharial and the muggur are likely to be sunbathing in full view. After driving about 20 km towards the river, we’re engulfed by ravines bathed in the golden afternoon light, a maze of intertwining, striated mud cliffs formed by centuries of soil erosion caused by floods. Climb one of the ravines for a full view of the rest of this dramatic landscape—the ravines stretch far beyond what the eyes can see, larger-than-life, intimidating, unreal. They are not as barren as they seem, and are dotted with birds, many of which you can spot on a nature walk.

You slowly reach a sandy beach, where a sturdy blue (Manesar-built) fibreglass motorboat awaits us, the only set of boats this side of the river which can be used for tourism at the moment. Cross the narrow river and you’re in Madhya Pradesh. The river, in fact, is considered unholy, and legend has it that Chambal came to be after a yagna in which thousands of cows were sacrificed, and their blood formed the stream. But the ‘unholiness’ of the Chambal is perhaps why it still runs so clean.

A bevy of red-beaked skimmers. (Photograph by Tribhuvan Tiwari)

We set off upstream. Even as we pass a crowd of ruddy shelducks and grey herons taking in the cool breeze and sunshine, we’re aiming for the little island up ahead, which is really the hotspot for fauna, a sort of afternoon hangout where the river residents create quite an orchestra, and pause once in a while for a quick drink of water. Sure enough, they’re all there this afternoon. We park ourselves in the middle of the river and become silent spectators to this jamboree. True to their name, numerous red-beaked skimmers, with their shiny white-and-black-tipped feathers skim the surface of the water, and settle on the island for a break. They stare at us awhile, comfortable at a distance of about 10 feet, but when we try and move in for close-up shots, they flutter about, skim the water again, form intricate geometric patterns in the air, and fly away. Far above them, a group of flamingos puts up an even better show of symmetry. Oblivious to all the activity around them, a couple of muggurs bask in the sunshine just where the skimmers were a moment ago, and after a little while, slide their ungainly bodies into the water ever so slightly to cool off. A beautiful white spoonbill hops around, joined by a number of other birds, like the painted stork, the lapwing and the curvaceous grey heron, the blue waters sparkling, the ravines rising behind.

And there, at a distance, we spot the impossibly long, angled snout of the endangered gharial. They’ve picked their own little private island in the middle of the river to sunbathe, and seem unperturbed by our advances, proudly showing off their rather menacing set of teeth. Alas, the sun sets too early, even before we can catch the Gangetic dolphins in action. That can be fixed with a repeat visit, we console ourselves—any excuse to be back on this river! But for the rest of the weekend here, there’s more chasing to do: the blackbucks in the mustard fields, the Saras cranes in the wetlands. By the time we leave the ravines, the badlands have created a whole new reputation for themselves, a well-kept secret that has a way of charming even the most sceptical city-dweller.