Narendra Modi, fearing voter fallout and a rampaging EC, shoots down the VHP yatra. The parivar is not amused. More Coverage 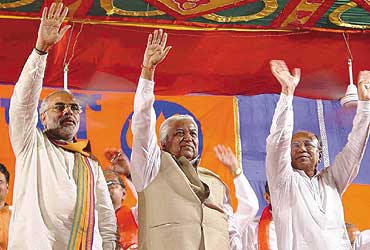 outlookindia.com
-0001-11-30T00:00:00+0553
When confidence starts wearing out, people reluctantly fall in line. The ruling BJP in Gujarat, exhausted after crying itself hoarse over Chief Election Commissioner (CEC) J.M. Lyngdoh putting a spanner in its early election plans, is now complying with the same CEC's order banning the vijay yatra of the Vishwa Hindu Parishad (VHP). With the commission shooting down the VHP's proposed yatra from Godhra to Akshardham, the BJP in Gujarat is now saying it wants precious little to do with either the Parishad, its yatra plans or its confrontations with the EC.

According to party insiders, the BJP's position reflects the lack of confidence in its trump card—Hindutva. Says a party functionary, "The BJP realises that stretching the Hindutva rhetoric any further could boomerang on it, and this is precisely why we are dissociating from the VHP and playing along with the EC." He argues it will be a misconception to believe that if VHP members are arrested while defying the EC's directives, the voters will perceive them as heroes defending the cause. "It will only be construed as the BJP government arresting the foot soldiers of Hindutva," he says.

There is also the fear that should the yatra turn violent, then it would have a negative fallout. BJP leaders already feel the state has seen enough violence. There's even a school of thought that any further communal trouble could work against the party. "People will say the BJP only knows the dharma of violence...so why should we vote for such a party," a BJP leader admitted to Outlook.

The party spokesman in Gujarat, Nalin Bhatt, refuses to buy this argument. But he chose to hedge on the yatra. "We have no comments to offer, for it is a VHP yatra...we have nothing to do with it. It is between the Parishad and the EC. I can answer questions on the gaurav yatra," he said. As for the political ramifications, Bhatt had this to offer: "Wait and watch".

In New Delhi, the BJP's central leadership reacted, but after a day's gap. Party president Venkaiah Naidu said that the EC's directive was inappropriate. "In a democracy, people must have the right and liberty to speak and to reach people. Any restraint is not a positive thing." Added BJP's pointsman for Gujarat, Arun Jaitley: "The EC's decision banning the VHP yatra is an unprecedented one. Every organisation, whether political, social or religious, has a right to carry on its campaign."

But in Gandhinagar, it's a different story. Bureaucrats and police officials who had all through the communal frenzy maintained a studied silence are today saying they will implement the EC directives in toto. They have even sent a report to the EC saying the VHP yatra could have a bearing on the law and order situation. And if the Godhra sub-divisional magistrate (SDM) granted permission to the VHP yatra (prior to the EC's directive), the decision would be revoked.

Predictably, the VHP, till the other day elated over CM Narendra Modi's spirited anti-Muslim diatribe and Lyngdoh insinuations, is in panic mode. VHP international general secretary Praveen Togadia was livid at a press conference in Ahmedabad on November 14. He claimed, "We are determined to hold our yatra as we do so every year. Lyngdoh has jurisdiction only over political parties, we are not one. I assure you there won't be any law and order problem." He said Lyngdoh had no power to overturn the Godhra SDM's permission. Togadia even alleged that the government report referred to by Lyngdoh was a mere fiction. But he hastened to add: "I'm not saying Lyngdoh is lying. I am only saying the government report was on something else."

Togadia's frustration is justified. The VHP, which had till a few days back been nurturing dreams of fielding at least 31 candidates, now sees the situation completely changed.The BJP is even now engaged in the uphill task of satisfying the different lobbies within. The fact that at least two dozen mlas, including several ministers, want a change of constituency has further complicated seat distribution. There is also stiff opposition to the candidatures of many sitting mlas. Even Modi is finding it difficult to make up his mind on a safe seat (though state BJP chief Rajendrasinh Rana says the CM's been invited to contest from 15 seats).

Party sources insist Modi will not seek re-election from the Rajkot-II constituency, the hometown of arch rival Keshubhai Patel. The latter is flexing his muscles, realising that at 72 this might well be his last chance to become chief minister. Patel was twice ousted as the CM, first by Shankersinh Vaghela (now with the Congress) and then by Modi. The Ellis Bridge seat in Ahmedabad is the one Modi was eyeing at one point. But this is the constituency of his other enemy in the party, Haren Pandya. Denying him the seat may not augur well later for the official nominee.

Ticket distribution has proved a problem for the Congress too, not so much from within but from the smaller parties like the Nationalist Congress Party (NCP), the CPI and CPI(M). Says ncp leader and former CM Chhabildas Mehta: "The NCP will go it alone and field candidates from 80 seats. But we will be with the Congress in the constituency Modi chooses to contest from." He says his party will think of extending support to the Congress after the elections.

With both the Congress and the BJP having kicked off their campaigns on November 11, a rift between the VHP and the Modi government may be a godsend for Vaghela. A senior BJP leader close to the VHP said Togadia and other Parishad leaders feel they have been "used and discarded" by their political patrons. "The change in the party stand seems to be giving them the jitters. Now they (the VHP) may not even be given tickets," says an ex-BJP minister.

So will a betrayed VHP campaign as enthusiastically for the BJP? If Togadia and Co do a Jammu in Gujarat and confuse the voters, then it may not be smooth sailing for Narendra Modi