The Balance Of Power

The General announces elections in a year, but also keeps himself firmly in the picture 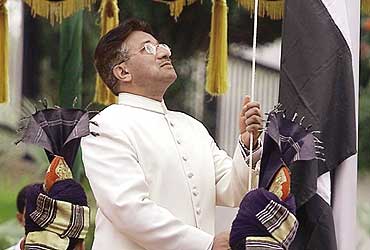 outlookindia.com
-0001-11-30T00:00:00+0553
Independence Day celebrations are usually staid and monotonous affairs. But on August 14 this year, people in Pakistan switched on their TVs hoping to watch president Pervez Musharraf announce plans to restore democracy. Their hopes were not belied: Pakistan, the president declared, will go to the polls between October 1 and October 11 next year.

The announcement, however, failed to enthuse the democrats. For, in his address to the nation, the president also declared, "There will be constitutional amendments to introduce checks and balances, which will be announced on June 30, 2002." Welcome to a controlled democracy or the democracy of convenience!

The lack of enthusiasm is because the president is expected to arrogate to himself untrammelled powers through the amendments. Says a senior law ministry official, "The legal advisors of the general have almost finalised a package of amendments. To 'restore' the balance of power between the president and the prime minister, the regime intends to revive those clauses of the 8th amendment which the second Sharif government had annulled through the 13th amendment." (The 8th amendment was introduced in 1985; the 13th in 1997.)

With the revival of the 8th amendment, the president will wrest back the authority to make key appointments like the services chiefs, provincial governors and the chief election commissioner. More importantly, the president and the governors will regain their discretionary power to dissolve the National Assembly and provincial assemblies at their sweet will. The 8th amendment has so far been invoked on four occasions to dismiss national governments.

Earlier, the 8th amendment had empowered the president to dismiss the government only through a dissolution of the National Assembly. This time, though, the president will be empowered to dismiss the government without dissolving the assembly, thereby giving a chance to members to choose another leader. These new powers will be exercised in consultation with the National Security Council (nsc), consisting of the three service chiefs and four civilians.

The proposals have been envisaged in a bid to ensure that the army is not compelled to intervene every time there is a political crisis. Similarly, the nsc is aimed at ensuring that power is not concentrated in the hands of one individual.

Plans are also afoot to block Benazir Bhutto and Nawaz Sharif from returning to politics. This is expected to come through an amendment which will limit a person's becoming prime minister to two terms. Sources in the chief executive secretariat claim Musharraf personally has no problems in allowing political parties to contest elections. But some of his influential military colleagues feel that the Pakistan People's Party (ppp) and the Pakistan Muslim League (pml) shouldn't be allowed to contest as long as they are headed by leaders (Benazir and Sharif) convicted in criminal cases.

The other controversial aspect is the method of amendment. The military regime is keen on amending the constitution before restoring democracy and is expected to revive the 8th amendment through what is called a Provisional Constitutional Order (pco).

No wonder that the general's statement has sent the ppp into a tizzy. Says seasoned politician Nawabzada Nasrullah Khan, "No institution except an elected parliament has the right to amend the constitution, what to talk of an un-elected and unrepresentative dictatorial regime." In contrast, a majority of the pml leaders have dissociated themselves from the 13th amendment, openly backing the junta's proposal for checks and balances in the system.

But a revived 8th amendment would, in essence, subjugate parliament to the will of the president, consequently transforming him into a supra-parliamentary authority. Says former interior minister, ppp leader and barrister, Aitizaz Ahsan, "The president under the new system will be elected indirectly as before. But the quantum of legitimacy accorded to an indirectly elected president will far surpass that of the directly elected assemblies. It will be a political anomaly par excellence. "

The army also feels that under a democratic dispensation, a large segment of the articulate section of the population is left out. This argument supports the idea of incorporating an elite consensus in any future set-up, thus providing for political stability. The proponents of this view feel that the role of the army in the running of the country should be legitimised.

But such an arrangement smacks of dyarchy, or governance through two independent authorities—the president (plus the nsc) and the prime minister. Says Dr Mohammad Waseem, a professor at Quaid-e-Azam University, Islamabad: "Dyarchy in operation after 2002 will reflect the problems noticed earlier post-1985. The members of the government will be loyal to forces outside parliament rather than to those inside it. The gap of legitimacy will persist. The government in office will be chary of accommodating, against the president's wishes, the segment representing the political opposition within parliament. This would ensure continuation of a polarisation in politics." In simpler words, come October 2002, Pakistan will still remain a divided nation.

Under this mango tree, enlightenment goes by the name of Andher