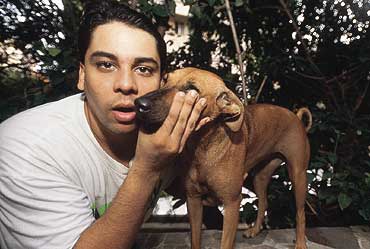 outlookindia.com
-0001-11-30T00:00:00+0553
To many stray dogs in Mumbai, Cyrus Broacha is part of the tribe, though he may admit that he doesn’t use the lamp-post much. Many strays owe their lives to this man who, contrary to popular belief, is neither mad nor too funny. For a long time now, he has fought a personal battle against the killing of stray dogs in Mumbai—asking anybody who will listen to adopt them, donating money to help sterilise and vaccinate them, triggering off an awareness campaign among the middle-class ("who are truly evil sometimes") that it’s the duty of every man to protect these dogs from painful electrocution by the municipality. This, in a city, where the general feeling is they should be put down since they chase cars and, with more success, bikers. But Cyrus says that it’s not within our rights to kill anything that moves, and that it’s within every dog’s to have another day. "They didn’t come to the city. We brought them here," he points out.

It takes a free, happy man to love a dog that has no home. On the hilltop of affluent Walkeshwar (where it’s rumoured that there is no soul), there is one man who will do anything he can to stretch the lives of the loathed dogs. There is an almost militant attachment between him and dogs. A few days ago, around midnight, he and his newly acquired wife (who had many personal debates in her mind before she accepted the ring) were in their car when they saw a man hit a stray dog. Cyrus got out of his car, flexed his systematically built biceps, shoulders and chest—which he sometimes calls breasts—and caught hold of the man’s hand. And said, "Hit me, hit me, hit me. When you want to hit a dog, you come hit me instead." His wife found it hilarious but the shocked pedestrian felt so bad he kept apologising even as he tried to free himself. "I am a mongrel myself," Cyrus says, "being half-Goan and half-Parsi." There should be some logic, he says, to why he feels so strongly towards stray dogs. There should also be some reason why man would want to kill a harmless animal. "I have seen a shirtless kid in heavy rains, covering a pup with his body. It’s the middle-class that has become heartless".

To reach out to this expanding section, he uses his brand name to constantly drive home the message that it’s our business to take care of stray dogs, that these creatures are by and large harmless, that these beings don’t spread any more diseases than humans do. He has fully lent himself to the Welfare of Stray Dogs (WSD), an organisation that has sterilised and vaccinated over 22,000 strays in about eight years. Every time the voices raise their pitch on death warrants for stray dogs, Cyrus fights back with his own ‘machinery’. Sometimes he even squeezes in his universal message on his MTV shows. There have even been times when he has plunked the message without MTV having any clue about it. But how do they fire a man who thinks a pink slip is something that falls off a woman. Soon, he plans to bring together "the real big names", in a concert that will congregate the youth and hammer in the message.

To a world that always wants to laugh at the court jester, Cyrus Broacha may be a soft target. But the truth is, at any given point of time, he is a few leagues smarter than the people who laugh at him. That’s how he won the Bournvita quiz recently, donating the cash prize of Rs 20,000 to WSD. There are people who hate him for standing up for the dogs, but it’s difficult shutting him up. He will keep asking parents to let children touch the animals. "What’s wrong with the kids today? They don’t even want to touch animals. They should fear Hindi films instead." And he will continue to think of ways to collect enough "moong dal" so that he can arrange to feed as many stray dogs as he can. Right now, though, he’s trying to open the mouth of a canine. He wants it to smile for the camera. To find out more, contact: Cyrus Broacha, C/o Welfare of Stray Dogs, Voltas House, T.B. Kadam Marg, Mumbai 400 033. Ph: 3733433; e-mail: wsd@rediffmail.com