If not the best, it’s definitely the most feelgood—apart from nostalgia-inducing—film of the year. 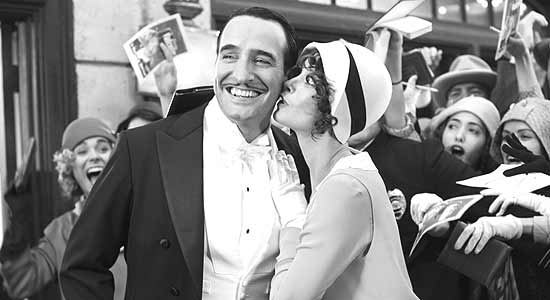 It already has three Golden Globes and seven BAFTAS in its kitty. On the eve of the Oscars, Michel Hazanavicius’s The Artist, riding high on the back of 10 major nominations, makes an unusually grand entry for a French film in Indian cinemas.

Right from the font of the opening titles and inter-titles down to the textures and grains of the B/W images, from the practised exaggeration of the actors’ expressions to the gently sped-up frames. Hazanavicius is spot on in capturing the finer details of moviemaking in ’20s Hollywood. The Artist is not merely an attempt at mimicking a silent film but a rigorous, meticulous effort at being one.

It is a simple enough story about silent cinema superstar George Valentin facing oblivion with the infusion of sound into cinema and the simultaneous rise of his fan, an extra called Peppy Miller, who becomes the talkie queen. A wonderful time-traversing montage—of Valentin sharing meals with his wife—establishes the inevitable. Peppy’s roles improve film after film as Valentin’s marriage and fortunes crumble.

What gives an added twist to the tale is that there is no ugly rivalry here between Valentin and Peppy, only an undefined affection. No one is quite “bad” in the traditional sense. Peppy may be ambitious, but not mercilessly so. Valentin is good-hearted albeit proud, cussed and incapable of embracing the future. A telling visualisation of his inner fears bares it all. It’s one of the three brief moments in the film when sound interjects. A dog woofs, a phone rings and a woman laughs. Only Valentin can’t speak a word. In fact, the film, despite the pervasive silence, uses sound in perfect measure. Much of the credit here goes to Ludovic Bource’s orchestral pieces.

There are some sequences which linger on: such as Peppy snuggling up to Valentin’s overcoat in his dressing room. Or Valentin matching steps with Peppy’s dancing legs without quite seeing her face. Or their last joyful dance together. The film is a celebration of making movies, of the purity of an art form as against the market logic. Or as Valentin puts it: about an actor who is not a puppet, but an artist.

Dujardin is perfect as the star held captive by his own image. Behind a pencil-thin moustache, neatly gelled hair and a ready smile that reaches his eyes, he plays Valentin with a delightful, dashing air. Bejo keeps pace with him. But the showstealer is Valentin’s adorable, over-the-top ham of a dog (Uggie).

It does get a little listless in the middle and also easy and predictable as the whole world and the dog appear to conspire to show up Valentin. But The Artist has a way of charming the hell out of the most cynical soul. If not the best, it’s definitely the most feelgood—apart from nostalgia-inducing—film of the year.