Hollywood animation can be boringly formulaic. And this one is all about some self-righteous moralising. 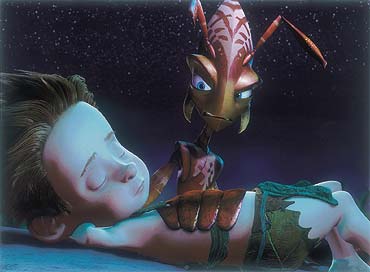 Hollywood animation can be boringly formulaic. At least that’s what The Ant Bully seems to show. Like many other films of the genre, it has a fair share of cute and quirky characters who display loads of attitude. At the head of the cast is Lucas, a bespectacled young boy without any friends, who keeps getting bullied by the big boy Steve. Lucas, in turn, takes out his frustrations on the ants in his backyard. Till one day he is turned into an ant himself and gets to spend quality time in the ant colony that he had so often been trampling under his feet. Like countless other animation films everything eventually ends well. And despite the threatening situations, the overall feeling is that of tremendous optimism and hope.

Many a weighty, starry voice, from Nicholas Cage to Julia Roberts, has been used to lend personality to the cartoon figures but it all adds up to very little and leaves you rather unaffected and unimpressed. The one character that does strike a chord with the kids is Lucas’s kooky granny, who is perennially losing her dentures and is always ready to fight the imaginary aliens in a bid to protect the family.

There are quite a few nicely executed sequences. The war on the exterminator in the end seems to consciously hark back to the epic battles of The Lord of the Rings, all in jest. Then there are some yucky scenes, like the poop-eating, the journey into the tummy of the frog or hanging by the nasal hair of a human being. Imaginatively conceived but certainly not likeable.

The play on the scale of things, on the bigness and smallness, might remind one of Gulliver’s Travels. But, basically, it’s all about some self-righteous moralising. How the big should not trample the small, how there’s lots to be learnt from the little people and how "the meek shall inherit the earth". The ant colony becomes a ready lesson in friendship, cooperation, loyalty and teamwork, something that the humans are presumed to lack. The references to America are also not too hard to spot. One is prepared for all this well-meaning preaching if it was delightful, enjoyable, entertaining. The Ant Bully is only intermittently so.