Outlook's opinion poll says nearly 70 per cent want Rahul and Priyanka to enter the fray in the upcoming elections. Will the Congress show its hand? Or keep its trumpcards for another time? And should the gerontocratic BJP brass be worried? 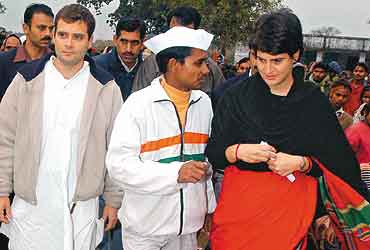 outlookindia.com
-0001-11-30T00:00:00+0553
Now it's official. The icons-on-the-make of the Congress, Rahul and Priyanka Gandhi, will campaign for the party during Lok Sabha 2004. So is the Congress confident that its double trumpcards will reduce the BJP to rubble? And is the saffron squad quaking? Neither is true. A series of dharnas, padayatras, anshans (fasts) and petitions written in blood—not to mention a formal request enshrined in the Pranab Mukherjee Committee report—went into "coaxing" the two into making a political debut. The Congress is positive that they will ignite party workers and electrify its campaign, True, perhaps, but will their charisma translate into votes?

"Inducting them into the campaign certainly will not hurt, but they can't be expected to work a miracle in electoral terms," says political scientist and Congress-watcher D.L. Sheth of the Centre for the Study of Developing Societies. "For the country as a whole, dynasty is no longer an effective symbol, although it has not wholly outlived its life. The image of the late Indira Gandhi may still carry appeal in remote areas and pockets of low literacy, where rulers are seen as royalty...by reflex, the Congress has reached for its favourite crutch in the absence of a compelling slogan," he adds.

The idea, admit Congress strategists, is to juxtapose the image of vibrant youth against the BJP's gerontocracy, on the premise that innovation outweighs experience as far as young voters are concerned. Burdened with a jurassic brigade of its own, the party hopes the brother-sister duo will be its answer to the BJP's media-savvy second rung. The two flanked the Congress president as she welcomed her late husband's exoneration in the Bofors case last week, eliminating any doubts about the succession. The emotion-charged Kodak moment was an unexpected bonus, the party's image-makers acknowledge. But they don't necessarily want the clean chit issue to become central to the party campaign.

In defence of the decision to draft the newly-minted Congress members for the campaign, spokesperson Abhishek Singhvi points out that the party has every right to use them wherever it thinks they will be effective. Even non-members, like filmstars, lend their glamour to election campaigns. Besides, the two are children of a Congress MP and it is only natural that they would campaign in and around Amethi. It's not as if they've been given a senior party position, he adds.

Even Congressmen acutely uncomfortable with the idea of dynasty and unimpressed with the siblings' babalog outlook on politics find a justification for inducting the two. "Don't look for inherent merit in members of the clan. They are instrumentalities," observes a party MP. So, as Sheth points out, the value addition is not so much in attracting voters as in inspiring young party workers who will then redouble their efforts to revive the Congress. But it is not as if a party dominated by old warhorses believes salvation lies in projecting a pair of dewy-fresh faces. "Voters have changed. Charisma is no substitute for hard work," says a Congress Lok Sabha MP.

Are younger Congressmen inspired? Ask Jitin Prasada, Sachin Pilot and Jagat Singh, generation next politicians all. The answer is yes. Jagat, son of Rajya Sabha MP and CWC member Natwar Singh, already an MLA from Rajasthan, says: "Their joining active politics will be good for the party. They've been brought up in a political family, so they already have a grounding in politics". Jitin and Sachin (sons of the late Jitendra Prasada and Rajesh Pilot) who quit high-paying corporate jobs to join politics and now eyeing the Shahjahanpur (UP) and Dausa (Rajasthan) Lok Sabha seats if their mothers do not contest, couldn't agree more. Priyanka and Rahul's advent, they say, will attract young voters.

"My personal view is that they should campaign on university campuses and in student hinterlands," says Singhvi. Second-rung Congress leaders like him are confident that the duo will certainly attract the young voter. "We must look to the rising and not the setting sun. Young voters constitute 60 per cent of the electorate. The appeal (of Priyanka and Rahul) to the youth will be powerful," observes Congress chief whip Priyaranjan Das Munshi.

Off the record, the hosannas give way to deep reservations about the long-term impact of the duo's political baptism on the party organisation. Says a Congress leader: "It reinforces the fact that the top slot in the party is reserved—now, it's going to be three top slots. Also, it means there's no escaping the kowtow culture in the Congress which a lot of the youngsters who are highly educated aren't comfortable with". As one of the "youngsters" points out, "There's a lot less incentive to work hard in the Congress as compared to the BJP. How fast you rise depends on whether the family likes you or not". Neither the party nor the country has any idea what Priyanka and Rahul stand for and the only sense of mission they seem to have is that it is their Christian duty, as Nehru-Gandhis, to save the country from itself, he adds.

Another criticism is that while the Congress has a line-up of young leaders no less charismatic than the BJP's, the induction of Rahul-Priyanka will force them into the background. And while party workers may be enthused by the duo, internal politicking within the organisation will be intensified along with the courtier culture.

A party MP senses a recent change in the attitude of Congress president Sonia Gandhi. "She is a lot less receptive to what we say. She prefers to refer people to Ambika Soni". One reason, he speculated, was that she is increasingly relying on the children for political feedback and advice rather than party channels as she did earlier.

And what of the party rank-and-file? Says Congress worker (and son of Faridabad mayor) Neeraj Sharma: "The result will be electrifying, specially in UP. And if Priyanka stands from Lucknow, she will give Atal Behari Vajpayee such a hard time, he will be begging for votes in the bylanes of the city". It's still not certain whether the siblings will contest. Says a senior Congress leader: "Why encash that card sooner rather than later? We know it can only work once. It is not a make-or-break election for anybody". Even so, the persistent buzz at the party headquarters is that Rahul is going to take the plunge from Rae Bareli.

Close-circuit speculation has it that the political exigencies which delayed Rahul's marriage to a Colombian national are the same ones that may hasten his political debut. It's easier to carry off a "foreign" marriage after settling into politics, a party leader pointed out. The party rank-and-file doesn't have great expectations from Rahul as a campaigner. A laid-back techie, he's quiet and shy unlike his glamorous, articulate, vivacious sister—a fact that has often led the media, including Outlook, to wrongly describe her as his elder sister.

Rahul is supposed to be well-read and highly educated (St Stephen's, Harvard, Cambridge)—a fact that St Stephen's alumni may contest. As a student, the reticent Rahul had a rough time. During a college ragging session, he couldn't explain how the Taj Mahal survived the devastating flood that destroyed Agra in Akbar's time. To add insult to injury, he was dragged to the nearby Hindu College and was ragged there as well. However, he took it sportingly—a testimony to his good nature. Says Rasheed Kidwai, author of a recent book on Sonia: "He seems genuinely nice. In 1999, while accompanying his mother to a public meeting in Hissar, he was wandering around the dais when he saw the elderly MLA Kartari Devi standing because there weren't enough chairs.He walked quite a distance to find her a chair".

Unlike his sister, who thrives on adulation and symbols of power, Rahul is the retiring sort. He dislikes being hemmed in by security guards and likes giving them the slip. He's close to his mother's family and is a particular favourite with his aunt Nadia. He has also resisted all efforts to find him a thoroughbred Indian bride. His mother is unlikely to push him into anything he does not want to do. A testimony of her affection is the fact that the Rajiv Gandhi Foundation was set up on Rahul's birthday, June 20.

Priyanka is the hot head, with a solidly vengeful streak that belies her vegetarianism and will, say sources, give BJP leader Pramod Mahajan, who said the top spot in the country ought to be confined to those of Indian parentage, the "Arun Nehru treatment". In 1999, she turned the electoral tide in Rae Bareli against Nehru (in favour of Satish Sharma) with a fearsome verbal assault on the former.

The helicopters have been booked and satellite phones ordered. Tour programmes are being chalked out, security equipment beefed up and election-worthy vehicles prepared. Let the Priyanka-Rahul roadshow begin.

De-Sexing Of A Dossier