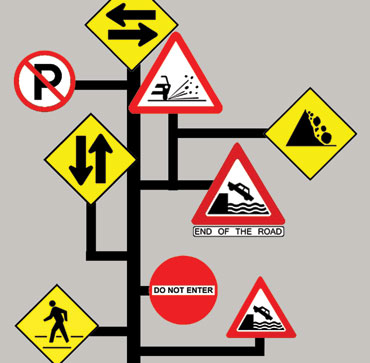 outlookindia.com
-0001-11-30T00:00:00+0553
Islamabad has drawn the 'red line'. It ably took the 'pressure' from the United States on the Mumbai attacks, and is seen as adopting a 'principled position': India must provide evidence; Pakistan cannot hand over to India any of its nationals; no foreign agencies will be allowed to interrogate Pakistani nationals on its soil.

Alongside, Islamabad launched its own 'initiatives': a joint investigative mechanism and a high-level team to travel to Delhi. Islamabad says Delhi's green signal is awaited. Indeed, it promptly acted on the United Nations Security Council call, which was what India demanded as per US advice.

With its vast experience in dealing with Washington, Islamabad is concluding that US 'pressure' has run its course. Attention will soon turn to the gala ceremony in Washington on January 20 for a historic transfer of power. Unless Pakistan precipitates tension, time is not far off before the international community urges India to engage Pakistan in a spirit of dialogue.

India ponders, 'What now'? It put its strategic partnership with the US to the litmus test and is dismayed at the result. India conducted over 50 military exercises with the US over recent years but they couldn't forestall the act of war on Mumbai or help track down the mentors of the terrorists. India was sold a dream—that Washington was determined to make it a first class world power. The dream lies broken. The carpetbaggers who peddled the dream are nowhere to be seen.

It almost seems grotesque that our strategic gurus promised that the Indo-US nuclear deal was a prerequisite for India to become a 'balancer' in the 21st century international system. Where was it that we went so hopelessly wrong in our triumphalism? Quintessentially, what we're witnessing is that the US never really "dehyphenated" its policies towards India and Pakistan like we believed or were led to believe, or both. The US policy is to maintain stable, predictable, balanced relationships with both India and Pakistan so as to optimally pursue its regional policies as a superpower.

There was no question of the US abandoning Pakistan or elevating India in disregard of Pakistani security concerns. Pakistan is pivotal to the realisation of the US's 'Great Central Asia' strategy. Thus, building up the Pakistani power structure, including the military, is a crucial element of its regional strategy. India can never replace Pakistan in the US geostrategy, in which control of Afghanistan is a priority.

Of course, befriending India would have its benefits as well. Its growing market offers business opportunities and it is also a military power in the Indian Ocean region with the capacity to act as a junior partner. Coopting India is useful for the US strategy towards Russia, China and Iran. Certainly, India could mitigate Israel's regional isolation in West Asia. Hence, India is integral to the US objective to remain embedded in the Asian security scenario.

The US global strategy is to perpetuate its dominance as a world power despite the steady decline in its influence and emergence of new power centres and, to this end, build coalitions from time to time. In the mistaken faith that India's foreign policy can flourish with the single underpinning of strategic partnership with the US, Indian elite neglected the shared concerns and profound commonality of interests India has with Russia and Iran over the Afghan problem. They cut adrift from regional politics and fancied the idea that so long as India harmonised relations with the US, everything else willy-nilly would fall in place—our adversarial relationships with China and Pakistan or the atrophying of our traditional ties with Russia and Iran. Some were myopic enough to actually argue for Indian military deployment in Afghanistan and to play the 'Tibet card' against China.

Simply put, it's time we understand that the open-ended US military occupation of Afghanistan has destabilised Pakistan and, in turn, is drawing the region into the vortex of terrorism. We need to work with Russia and Iran on a regional initiative for an Afghan settlement. It is not in our national security interest to abandon Afghanistan as the playpen of a closely-knit US-UK-Pakistan-Saudi condominium.

The moot point is whether the breakdown of foreign policy is attributable to a failure of leadership, or is it that the Indian elite today is so compromised with the "Washington consensus" that it refuses to see hard realities. The first case is appalling, and the second, frightening. After all, our Pakistan problem is not something new. We sought to keep the tension under check through a judicious mix of factors of advantage. Which, of course, required a broad-based, independent foreign policy and an awareness that there is no such thing as absolute security.

(The writer is a former IFS officer)