If the Congress-led coalition breasts the tape, Manmohan Singh could be prime minister 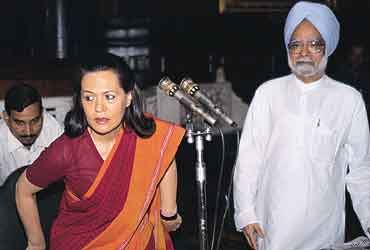 For an apolitical person, he has been loaded with a great deal of political responsibility. He is negotiating two of the three most important alliances undertaken by the Congress: with the DMK in Tamil Nadu and the NCP in Maharashtra. He is a member of every important election committee set up by Sonia: on political affairs, the manifesto, alliances, strategy and fund-raising. He also keeps an eye on Kashmir and Northeast affairs. All this, apart from being a Congress Working Committee member and head of the AICC Economic Affairs cell, as well as Sonia’s counterpart in the Rajya Sabha—leader of Opposition.

Quite a comeback, considering just a year-and-a-half ago, when his Rajya Sabha term ended (his ‘good man in politics’ swing at the South Delhi LS seat in ’99 having come a cropper), there was speculation about his withdrawal from politics. But Sonia gave him a fresh term.