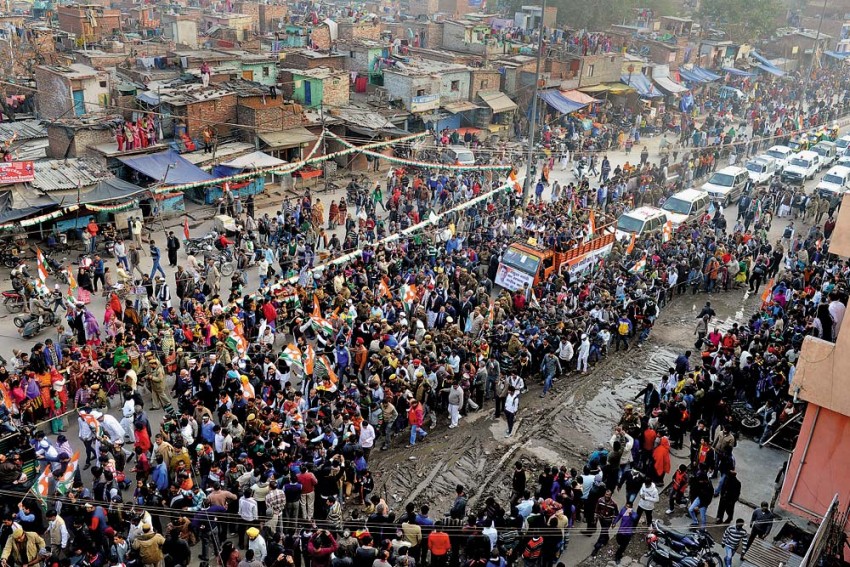 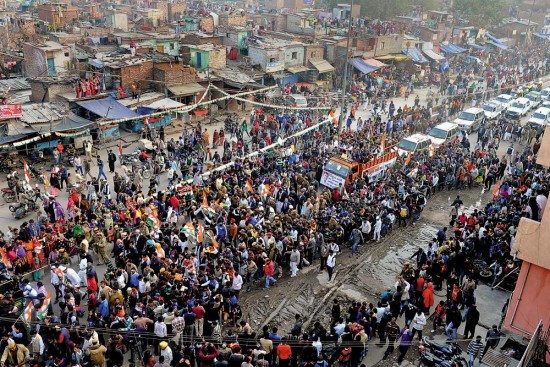 “Join us as the vehicle moves ahead, don’t turn around and walk away,” a tall, bearded Youth Congress volunteer tells an unexpectedly large and restless crowd waiting for nearly an hour to catch a glimpse of Congress vice-president Rahul Gandhi at the first road show organised by the party in Kalkaji on January 27. That sums up all of the Congress’s apprehensions and expectations from the upcoming Delhi asse­mbly poll. In what seems like a fight for survival rather than one to win or even increase their voteshare, the Congress began its campaign well after the BJP and AAP campai­gns had gathered full steam.

Even as the Congress’s crown price des­cen­ded from his Safari to get on to an open truck for the road show, there was an unexpected cheer from the nearly 5,000 people gathered to simply catch a glimpse of him. While several complained about the nearly three dozen security personnel who kept them from getting a clear view of Rahul, a party volunteer didn’t miss the opportunity to remind them of Indira’s and Rajiv’s assassi­nations. “After these sacrifices made by the Congress for the nation, we’re forced to oblige the police for the safety of your leader,” he said.

Having won the seat from Kalkaji in three consecutive elections until 2013, the constituency is one of the few remaining Congress bastions in Delhi. After having ruled Delhi for 15 years, the Congress won merely eight seats in December 2013—Gandhi Nagar, Balli­maran, Chandni Chowk, Okhla, Seelam­pur, Mustafabad, Sultanpur Majra and Badli. Of these too, it lost Badli, Sultanpur, Seelam­pur, Matia Mahal and Okhla to AAP in the 2014 general election. That all are Dalit and Muslim-dominated constituenc­ies is what party leaders say is worrisome.

In an attempt to address the issue, the party’s campaign focuses on the poor, especi­ally those living in JJ colonies. The Congress being the first to initiate construction of in situ flats to rehabilitate hutment dwellers of JJ clusters, the party still has its loyal support base in these colonies, of which Kalkaji is one. “The BJP only talks and does nothing for the poor. We have ens­ured that several living in urban slums are given pucca houses and can live with dignity,” says Kalkaji candidate Subhash Cho­pra. However, AAP too seems to have garnered support here, as some confess to have voted for Kejriwal in 2014.

Having finished a distant third behind the BJP and AAP in Delhi’s seven parliamentary constituencies in 2014, it will be a while before the Congress recovers lost ground. Without a face, lacking in organisation, faction-ridden and cash-strapped, the party seems unwilling to drain resources fighting all 70 seats. For the Congress, the upcoming election is more about remaining relevant.

While some in the Congress do not seem to mind the AAP winning Delhi, others hope the party does actually win with a majority. This could ensure that the BJP government at the Centre and the AAP in the city-state are at loggerheads for the next four-and-a-half years. AAP’s win could, in fact, augur well for the Congress in the long term.