The Aedes Of September

Whether it is officially declared or not, dengue and chikungunya are epidemics. What can you do protect yourself? 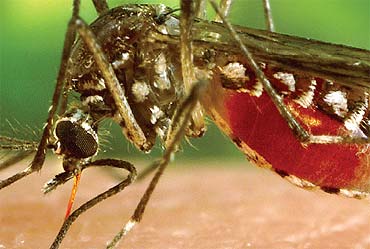 Well, the story so far, in this panic-stricken month of October, is: the mosquito seems to be winning. And no wonder, since man has only belatedly summoned up the energy to fight. Large swathes of southern and western India are in the grip of debilitating chikungunya, a word that rang no bells for most Indians until a few months ago, but whose meaning in Tanzania's Makonde language—"that which bends up"—is now lodged for life in the memory of TV-watchers and newspaper readers.

While this mosquito-transmitted fever is making a comeback in India after over three decades, is determinedly heading northwards, the toll from a more familiar enemy, dengue fever, and its severe form, dengue haemorrhagic fever (DHF), is rising Sensex-like. Over 2,700 cases and 36 deaths, the official enumerators said, on October 4, under-reporting perhaps, as many critics allege. A week later, on October 11, the numbers had risen to 4,039 cases, and 84 deaths. And they will rise further, until temperatures dip and become less kind to mosquitoes.