The Advantages Of A Long Nose

Who better than him to provide this thumbnail sketch of our contemporary history, gossip and all? 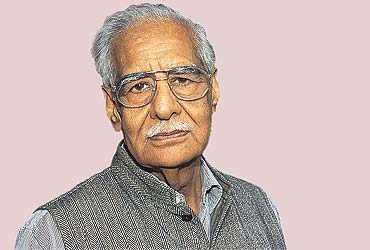 Scoop! Inside Stories From Partition To The Present
By Kuldip Nayar
HarperCollins Rs: 250; Pages: 213
Kuldip Nayar’s is a classic case of a competent gamekeeper turning into a boisterously successful poacher. For the first 15 years of his working life, he was in the government’s Press Information Bureau, mostly as Information Officer, successively, of Govind Ballabh Pant and Lal Bahadur Shastri, the two outstanding Union home ministers after the matchless Sardar Patel. He left the pib just before Jawaharlal Nehru’s death and Shastri’s ascension to the office of prime minister to head the news agency, uni. He has since spent more than four decades to expose the official secrets he used to protect so assiduously in his pib days. No wonder he calls his book Scoop.

Nothing could have illustrated the transformation in Kuldip’s professional persona more than his candid ‘Status of Hindi’, one of the more evocative chapters in his narrative. He writes of the time when the reorganisation of states, largely along linguistic lines, was more or less complete but language remained a live and emotive issue. For, the Constitution had decreed the replacement of English by Hindi as the official language by January 26, 1965. Non-Hindi-speaking states refused to tolerate this and bluntly said so to the Official Language Commission. The Constitution also required that a parliamentary committee examine the commission’s report and make its recommendations to the two Houses.

Pant, who did want Hindi to be India’s lingua franca, presided over this committee. He was shocked by the acrimony at the committee’s very first meeting. His appeal to members to keep the stormy discussions confidential fell on deaf ears. He then wanted Kuldip to block the publication of the committee’s proceedings somehow, and the resourceful IO managed to do so with aplomb. Most courteously he misled the entire press corps, including this reviewer, by claiming that the committee’s proceedings were "privileged" and to publish them would be a "breach" of Parliament’s privilege. However, when the whole controversy was over—only after virulent anti-Hindi riots, especially in Tamil Nadu; and because of Nehru’s assurance that English would continue as "associate" official language for "as long as the non-Hindi-speaking people wanted it"—Kuldip apologised to us.

In his book, he discloses how sharply Nehru expressed his displeasure with the Pant Committee’s report, and reminds the readers of the complexities and disastrous consequences of the language problem. There are other interesting chapters on important landmarks in India’s march since the midnight tryst with destiny.

Indeed, the 214-page book, an original paperback, is a thumbnail sketch of contemporary Indian history. It begins with the Mahatma’s assassination—when the author was a rookie reporter-cum-subeditor in an Urdu daily in Delhi’s Ballimaran—and ends with Atal Behari Vajpayee’s famous bus ride to Lahore that, in Atalji’s own words, was "diverted to Kargil".

All of us in the thrilling but often troubled trade of journalism—especially those of us who were active during the era when there was no television—do develop a measure of egotism. Even so, no one should cavil at Kuldip’s superabundant use of the first person singular. Judging by the impact, he has more to crow about than most of his contemporaries. An example that is not exactly a scoop—there are quite a few exciting ones of these on other pages—but something timely and telling relates to the succession to Nehru. In one of the earliest stories on the subject, Kuldip reported, "Mr Morarji Desai is the first to throw his hat into the ring." He adds that both Kamaraj and Shastri "thanked" him for helping to "settle" the issue. Desai complained about this story even in 1977 when he had at last become prime minister.

The account of how the CBI’s top secret report on the shenanigans of Biju Patnaik and Biren Mitra, successive chief ministers of Orissa, makes interesting reading. So does the chapter in which he says he got the first confirmation of Indira Gandhi’s still secret decision to hold elections and relax the Emergency from Kamal Nath. Of course, Kuldip has written about his own arrest during the Emergency, and has done so with becoming restraint.

It is a pity, however, that he makes such avoidable mistakes as describing the famous Dwarka Prasad Mishra (Brajesh’s father) as Durga Prasad. But these are minor matters. Altogether Scoop is an enjoyable read.