The Absence Of Air

A clinical, numbing record of how our 'justice' system subverts democracy 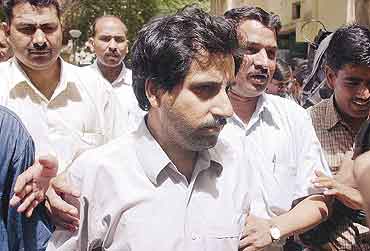 My Days In Prison
By Iftikhar Gilani
Penguin Pages: 148; Rs 195
Immediately after entering Delhi’s Tihar Jail, Iftikhar Gilani was beaten unconscious by a mob of jail officials and convicts. On regaining his faculties, he was ordered to use his blood-soaked shirt to wipe a filthy toilet and forced to wear the excreta-splattered shirt for the next three days. Gilani was kept in detention from June 2003 to January 2004 on false charges manufactured by the Intelligence Bureau. He was eventually released because he was a well-known journalist on whose behalf his media colleagues, members of Parliament and some Union cabinet ministers campaigned vociferously. He was fortunate. Thousands of innocent undertrials continue to remain in depraved Indian jails for years due to the criminalised police, prison and legal system which functions with impunity.

For those who mindlessly brag about the world’s largest democracy, Gilani’s factual report should be compulsory reading. A high-decibel election every few years becomes an empty populist ritual if not accompanied by working institutions which can ensure equality before the law and equal protection of the law for every individual, regardless of status, wealth, community or caste. Gilani’s book is valuable as it is not an exercise in emotional rhetoric but a cool-headed, clinical record of his experiences from the moment a posse of policemen barged into his small flat on a sweltering June night to his release seven months later. Gilani’s ordeal of humiliation and brutality, beginning with the police providing falsified evidence to magistrates who repeatedly dismissed credible defence testimony, is not an exceptional case.

Torture and imprisonment of innocents and making a mockery of the law have become routine facets of our ‘justice’ system. According to home ministry data presented to Parliament in December 2002, there were 2,89,013 prisoners lodged in 1,259 jails all over the country. Of these prisoners, only 72,304 were convicts while 2,16,709 were undertrials. According to prison studies, the majority of undertrials are eventually found innocent after spending long periods locked up in hell-holes like Tihar. Blaming the system is not enough. Far too many of the policemen, prison staff and judicial functionaries who operate the system lack professional integrity, humanity and fairness in their dealings with the public. Even that much-vaunted guardian of public liberties, the press, is often callous and in cahoots with the police in destroying the reputations of individuals even before they’ve been tried.

In Gilani’s case, journalists Neeta Sharma and Balbir Punj wrote patently false and damaging articles about him. Ajay Agrawal and A.K. Kaushal, then senior officials at Tihar, justified the brutal treatment of prisoners. Delhi’s then chief metropolitan magistrate, Sangita Dhingra Sehgal, refused even to record Gilani’s initial defence statement. The obviously tampered evidence provided by IB officials Majid and S.M. Gauba was readily accepted to detain Gilani for seven months. Every group preys on Tihar’s inmates. Doctors routinely prescribe dangerous, anti-schizophrenia drugs to prisoners suffering any ailment. Prisoners requiring psychiatric care are cast away in the dreaded isolation cells of the jail hospital. Other ‘troublesome’ prisoners are kept in solitary confinement for as long as three years. Third-rate teachers, religious preachers and ngos show up at Tihar to seek self-serving publicity. The only commodity which helps provide prisoners with what should be their rightful dues under jail regulations is hard cash. With true black humour, Tihar inmates refer to rupees as Gandhis.

Gilani was booked under the draconian Official Secrets Act, 1923, primarily on the basis of having downloaded military details on his computer from a publicly available website. Under OSA, carpenters, auto drivers and lowly armed forces personnel have been picked up, tortured, planted with dubious documents and accused of passing information to Pakistan’s isi. The motivation for arresting innocents is often petty and personal. An army carpenter had a scuffle with an IB official while boarding a bus in Delhi. He was taken to an interrogation centre and forced to write names and locations of units where he had been posted. He was recently released on bail after six years in prison. At other times, the glamour, honour and rewards for having busted a spy ring entice investigative agencies to take the law into their own hands. Even a senior scientist like S. Nambinarayanan of ISRO has suffered imprisonment and mental torture due to OSA misuse. The nhrc has ordered the Kerala government to pay him Rs 1 million as compensation for trampling on his human rights. Dozens others, including the carpenter, will never receive compensation or redress.