The minnows are the game’s dreamers, ICC exclusion is no answer 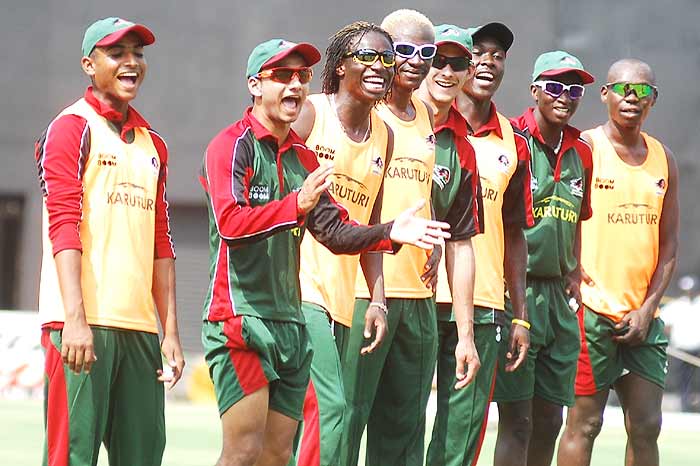 Give Jr A Helping Hand

“I work five days of the week, almost without exception,” says the Netherlands opener-wicketkeeper Wesley Barresi, cheerfully slumping down on the grass after nets. “Else I won’t survive!” True, modern sport is a full-time job and even an Aussie coach would approve of Barresi’s commitment. Except that Barresi is talking of a commitment less heroic than hitting or catching a cricket ball; he’s talking about putting food on the table, getting a nice house, a nicer car. He’s talking about the business of life—cricket is only something he loves.

So Barresi, if you couldn’t tell from his sparkling batting cameo against England, and a stumping of genius, works as a manager at a warehouse and studies law. Refreshingly for a cricket player who’s 26 years old, he says, “I’m young and will decide between my current job and a career in law.” Says team manager Ed Van Nierop, “We’ve got a tobacconist, a teacher, a restaurateur. Then we have a burger shop manager, a personal trainer and a financial advisor.” They have a few cricketers too—three professionals, led by Ryan ten Doeschate.

Four years ago at the World Cup, similarly powered by assorted amateurs, Ireland knocked out Pakistan. Bangladesh knocked out India. A triumph for smaller nations and a hope for the game’s nucleus enlarging, you’d think?

Not quite. The exit of India and Pakistan caused financial losses; to ensure that Ireland’s feat wasn’t repeated, the ICC changed the tournament format, guaranteeing India (and all other teams) at least six matches. Then, with a move timed with breathtaking insensitivity, a day before the tournament’s start, ICC CEO Haroon Lorgat sternly confirmed that only 10 teams would be part of the 2015 World Cup. The number of teams at the Twenty20 World Cup, though, would go up from 12 to 16. “Twenty20 is the best format to develop the game worldwide and it provides a better environment for competition,” Lorgat says. “The 50-over format is more skill-based and suitable for the top teams.” So how about teaching the minnows some skills? 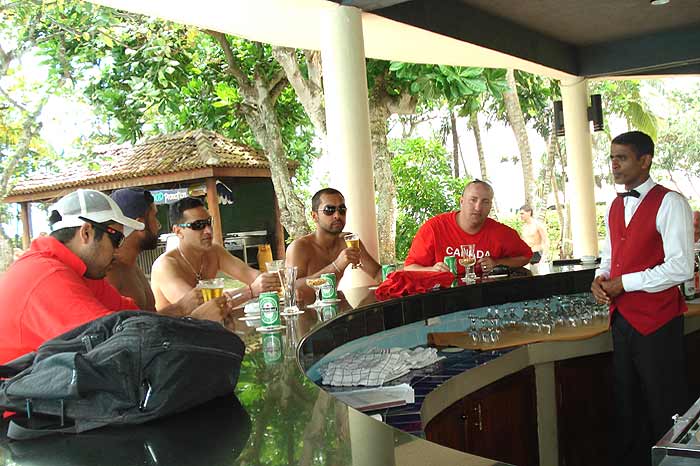 Canadian players at the poolside in Colombo

But there’s also some truth to what the ICC man says. The first month of this Cup is full of irrelevant matches; and the first few games between the big and small teams have been horrible mismatches—Kenya, Canada and Zimbabwe were hammered. But the minnows ask: how do we improve if you ignore us? Cricket is a minor activity in their countries, and they look up to the ICC for money and guidance. “We have talent. Our players need to be encouraged and groomed,” Canada manager Mike Henry says. This won’t happen by banishing his team from the World Cup. “It’s a step backward,” he says.

Kenyan manager Arjun Vidyarthi asks, “Does the ICC really want to make cricket global?” He points to the irony of the ICC wanting to take the game to China, where there’s no tradition of cricket, but ignoring those who play the game for the love of it. He adds, “Dhoni’s done 180 ads, our boys are playing for the love of the game.”

Kenyan captain Jimmy Kamande repeatedly says his team wants to go out and “express ourselves”. After they were bowled out for 69 against New Zealand, this became a joke in the press box. Close range, the joke doesn’t look funny. Half-an-hour after the defeat, they look devastated in the dressing room. Outside it, Tom Sears, chief executive of Cricket Kenya, paces up and down with a dark brow and contemptuous words for the ICC. “We chronically lack exposure in playing the big teams. What else do you expect?” he tells Outlook. “We play the top teams once in two years! Sometimes, sport is more than just about money. We’re trying to run cricket in Kenya, with a population of 40 million, on a budget smaller than a New Zealand first-class team’s. We need help.”

Smaller countries suspect the ICC’s greed has overwhelmed its desire to expand the boundaries of cricket. “I’d say it’s more like crony cricket among the big teams,” says one minnow team official. And then, caustically: “India was pathetic in the first two World Cups. What if the bigger teams had kept it out of the 1983 Cup? Big nations are happy as long as they’re making money.”

Most small teams agree with the ICC on the primacy of Test cricket. The difference is they actually want to play it, but the ICC, says one official, has no plan to expand the pool of Test-playing countries. Ireland’s top player Ed Joyce says World Cup banishment is a big blow to their hopes of playing Test cricket. Eoin Morgan, Irish-born, opted for England to play regularly at the top level. Supporting Joyce is England’s Graeme Swann, who asks, “Why would you want to take the world out of the World Cup?” Maurice Ouma, former Kenyan captain, adds that T20 is good for fun and money, 50-over cricket is crucial to compete, and Test cricket is the ultimate test.

Netherlands captain Peter Borren, however, thinks that Test cricket, all of five days, can’t be made part of the Dutch sporting consciousness. “I think the future belongs to T20 cricket,” he says.

But surely, even the ICC knows that T20 cricket will only teach damaged skills to the minnows? “Starting off with T20 cricket is wrong,” says Seren Waters, the young Kenyan opening batsman. “Technique comes first, and can be taught only with first-class cricket. T20 can only corrupt it.” Waters feels the ICC should provide opportunities for them to play three- or four-day cricket, perhaps have senior nations invite associate teams into their first-class competitions, or pit their development teams against the minnows. Says Sears, “They’ve got hectic schedules, but if the associates aren’t embraced by the big teams, the gap won’t be bridged.” 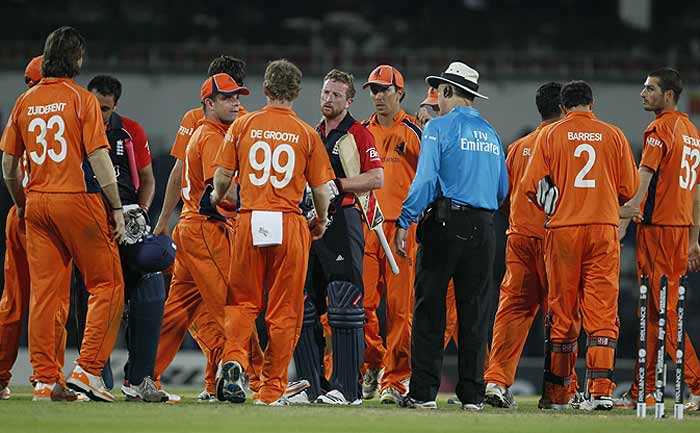 Collingwood, Bopara shake with the Dutch players after the England-Netherlands tie

Hamza Tariq, the 20-year-old Karachi-born Canada wicketkeeper who wants to fashion himself after Adam Gilchrist, is “heartbroken” with the ICC’s position on associates. It doesn’t help that cricket has a very fringe presence in the minnow countries; it’s the 25th most popular sport in the Netherlands, confirms van Nierop! Younger members of team Canada are students or private sector workers. Cricketers there mostly practise indoors, pay for club memberships and buy their own gear. They’re unused to playing in the heat of the subcontinent. While the ICC aid to each associate team is over $3 million for the World Cup, corporate sponsorships are almost non-existent. Netherlands don’t have a sponsor; Indian dairy company Amul, spotting an opportunity, struck a deal with them for the World Cup.

In many ways, the ICC’s confusion is understandable. After Pakistan in 1952, only three teams have been raised to Test status—Sri Lanka, Bangladesh and Zimbabwe. They share a colonial past and deep cricket roots, like the other Test-playing nations. Of these, only Sri Lanka has made a successful transition. In the modern era, the slower rhythm of Test cricket is probably impossible to plant in a people to whom cricket is foreign. Even in Test-playing countries, the long form of the game is under threat from the tidal wave of Twenty20.

The ICC has to look away from its core market of India, where also changes are afoot. The IPL is cornering a larger share of advertising revenue every year; money from India into the ICC coffers is likely to go down. It might be a good idea, while the going is good, to take the fledglings under its wings. And so when Kamande blamed the loss to Kiwis to his batsmen’s penchant for playing across, you wonder who will ever teach them to play with a straight bat. Not the ICC, it seems. It wants them out of the party.

James Ngoche of Kenya has a few last words: “Cricket is just a religion to you guys (Indians)—to me it’s life. The World Cup is the pinnacle of my life.” Enjoy it while you can, James, for they’re taking it away from you.

By Rohit Mahajan in Chennai and Nagpur, Satarupa Bhattacharjya in Colombo