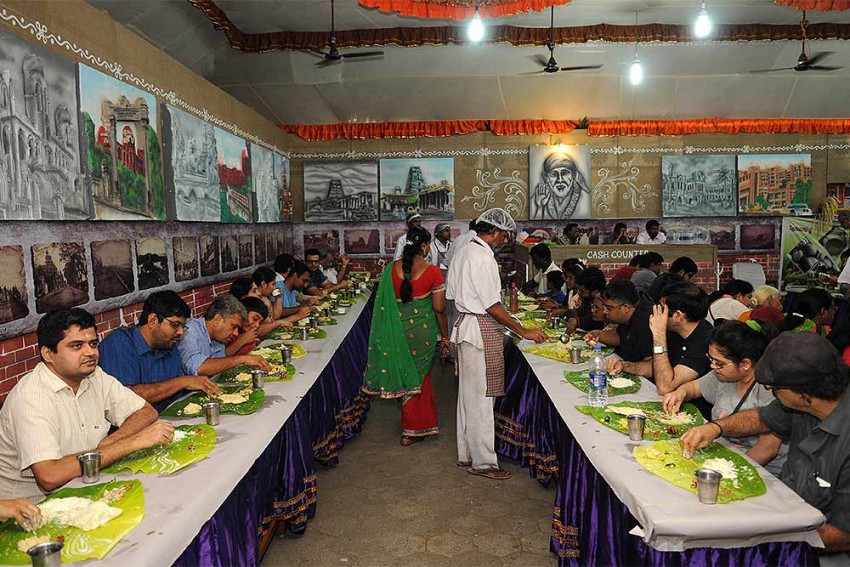 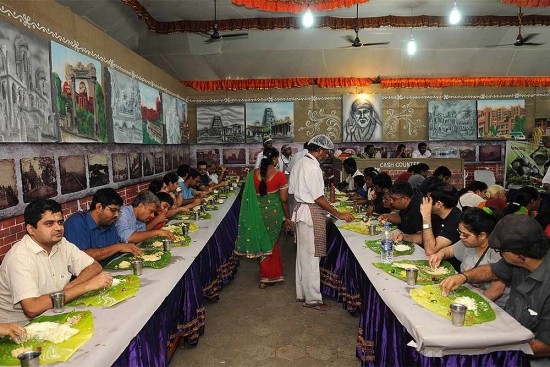 If Kannada can also be a Carnatic raga, then Mountbatten can refer to the veteran running that canteen alongside the music venue. At 87, Mani, with a prefix that is the name of India’s last viceroy, is busy entertaining guests at his Chennai cafeteria that can go quiet once the Margazhi season ends by mid-January. For three weeks now, his special delicacies have enriched concert freaks with an experience as delightful as a Todi alapanam or taniyavartanam on stage. So much for his lip-smacking Deccani dishes at the thatched pandal by Sri Parthasarathy Swami Sabha in downtown Mylapore.

Before the next bite of a spongy vadai, briefly on how he is known as Mountba­tten Mani. As a 17-year-old understudy to a top wedding caterer, the youth had once served food to the British lord, also independent India’s first governor-­general. On the dignitary’s last visit to Madras in 1947, Mani’s spread of south Indian vegetarian dishes at the Raj Bhavan imp­ressed the VIPs. Today, Mani and his son Srinivasan are among the city’s top wedding caterers. And, come the Tamil Margazhi month (which is generally marriage off-season for the Hindus), some of them pitch tents at the leading sabhas that host cultural progra­mmes in the salu­brious weather.

Last fortnight, on Christmas, Mani’s sweet akkara vadisal dish took the cake even as Vishaka Hari regaled the holiday crowd with her Harikatha musical discourse spun around tales from mytho­logy. The sabha functionaries sense a synergy in associating with the octogenarian. “Whether or not the rasi­kas attend the concerts, they would come to find out what Mount Mani has in store,” chuckles an offi­ce-bearer. “His culinary spread is as much an attraction as the menu of ragas at the kacheri (concert).”

Mani’s 15-course vegetarian lunch may be pricey at Rs 350 per head, but the queues form no break between 11 a.m. and 3 p.m . The scion at the canteen would let out some of the culinary secrets. “We ret­ain the authentic taste,” says Srinivasan. “We avoid onion and garlic in our lunch. We innovate, but there is no alterat­ion in classical inputs into traditio­nal dis­hes such as sambar, rasam or koottu. 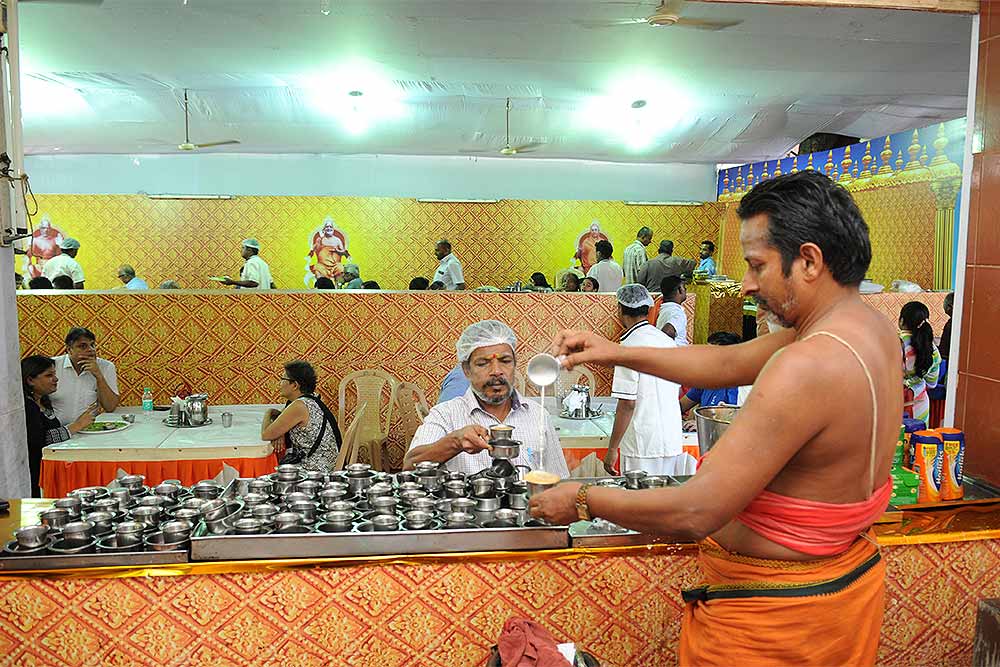 Photograph by R.A. Chandroo
“We do innovate with the dishes, but don’t play with ingredients for traditional items like sambar or rasam,” says a leading caterer.

Readily seconding him is a stream of mamas and mamis who thank Srinivasan for a hearty lunch. “Our annual December season isn’t complete without the traditional lunch at Mount Mani’s canteen,” says P.S. Giridhar, a chartered acc­ountant living in Mumbai. “The musical expedition needs to be complimented by the culinary experience as well.”

Theatre artiste T.V. Varadharajan says canteen-hopping is a trend during the music season when Chennai’s more than five dozen sabhas resonate with kacheris from forenoons to nights. “Many of my friends spend more time at the canteen halls than inside the auditorium,” he shrugs. “Since you don’t need to speak in hushed tones at the canteen, it becomes a busy and loud meeting place.” The canteens attract not just the music-lovers, but even those not so musically inclined. Office-goers are noontime regulars at sabhas, wanting to try out a typical vegetarian item that is a break from their home-cooked or hotel lunch. Often they elbow out kacheri buffs, prom­pting a few sabhas to place restrictions on ‘outsiders’ eating at their canteens. For Srinivasan, that isn’t an all-too pleasing move. “When you are celebrating food, how can we imp­ose restrictions?” he asks.

Not different is the attitude of other sabha canteen runners. “What our wor­kers earn during this season comes in handy when they go home for Pongal festival (mid-January),” reasons K. Ram­esh who has been administering the Sasthalaya canteen at Narada Gana Sabha (NGS) for past two years. At Alwar­pet, the canteen first became an adjunct of Music Academy’s ann­ual festival since 1940. Music historian Sriram V. points out that back in 1939, when the festival was first held in the Senate Hall of the University of Mad­ras, there was no eatery in the vic­inity. “The following year, academy secretary K.V. Krishna­swamy Aiyar roped in Ambi’s Café of Broadway as the caterer to operate from the varsity campus. Thus was born the concept of kacheri canteen. It has remained a popular add on to the city’s music season.”

Some canteen owners earn a fan-­following perhaps on par with a Carna­tic vidwan. Gnananimbika Jayara­man is one. The first name is of his catering service that used to function at NGS till a couple of years ago. “The quality of ­music may have varied from day to day, but not the food at Gnanambikas. There was something on offer for every stomach,” Sriram recalls in a blog. “Just as people wondered as to what new item an artiste may present in a season, there were fans who thronged Jayaraman’s canteen asking for the latest dish. There were households in Madras which did not light their stoves during the season.”

At the hallowed Music Academy, holding the culinary fort is Mint Padmana­bhan. The food has a freshness typical of the perennial herb, though the Mint here represents the north Chennai loc­ality from where the veteran caterer comes. It isn’t that spacious a canteen at the busy academy—that way different from the case with NGS. “We allocate the rear side for car-parking,” gushes NGS secretary Hari Shankar. “This is one reason why our sabha canteen has been much sought after irrespective of the contractor. Of course, we engage only those who serve quality food.”

The sabha canteens also serve as a marketing ploy used to book catering contracts for weddings or other future functions. “A third of the enquiries we receive during the kacheri season get converted into bookings,” says Sasthalaya’s Ramesh. “They come asking us if we can serve our famous ilaneer paya­sam (pudding made with milk and tender coconut).” No wonder, the menus get tweaked with innovations. On his part, Mount Mani comes up with a triple-­decker idli or vetthilai dosai that inserts betel leaf, while Ramesh’s special dosai is vazhaithandu that chips in banana tree-stem. There is also the Chettinadu thattu idli.

The canteens aren’t profitable ventu­res but launchpads for marriage-party contracts, says Srinivasan. Adds Ram­esh: “Seeing our name-board at a wedding hall, people recall our canteen at NGS with fondness.” Ragas can be delicious in more ways than one.

‘Betting And Fixing Attempts Will Simply Go On’