M.F. Husain was a contemporary of every Indian artist, young or old 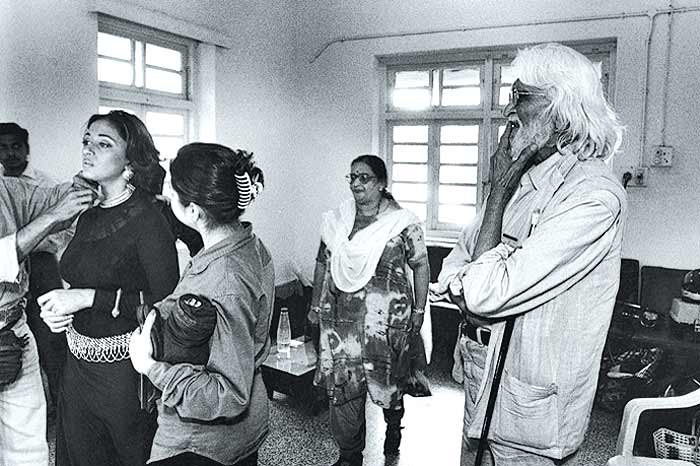 M.F. Husain loved horses and fast cars. (They didn’t call the man ‘Fakir in a Ferrari’ for nothing.) So when curator and art journalist Sahar Zaman met Husain in Dubai recently, expecting an engaging, even eccentric chat, it was hardly a surprise that she was treated to a ride in a fiery red Ferrari (which he had bought a couple of years ago). “There he was, zipping down the road against his doctor’s orders, humming along, hitting the gas and gushing about how smooth the car was,” she recalls.

At 95, with a certain joie de vivre as well-known as his art (Delhi Art Gallery’s Kishore Singh calls him a “rock star”), Husain was still working on projects—one on the Arab civilisation commissioned by the Qatar royal family and another called ‘From Mohenjodaro to Manmohan Singh’.

“In this country if you say you’re making a film in the Dadaism mould, it’s mistaken for something else.”
On making Gajagamini

In his later years, Husain had famously dabbled in films. He made Gajagamini with Madhuri Dixit and Meenaxi with Tabu, but his interest in films was not all Bollywood. “He was a great Humphrey Bogart buff,” reveals Anvar Alikhan, recalling conversations with Husain at a humble dosa joint, a favourite haunt in Hyderabad, discussing The Maltese Falcon, Casablanca and The Big Sleep. “He said his stream of consciousness sometimes inexplicably brought Bogart into his paintings.” Talking, though, wasn’t one of his strong points, remembers S.H. Raza, with whom Husain shared a cordial, if reserved, friendship when they were together as part of the Progressive Artists Group. “He kept to himself. Souza (F.N. Souza) was the talkative one. But Maqbool would say, ‘Chal bhaiyya, kaam ko dekhna hai.’ He hardly talked about his paintings, wouldn’t unnecessarily intellectualise anything, and that’s how he developed a style so early. He was a good businessman too,” Raza recalls. He says over the years Husain’s competitive streak grew (he was furious when Raza’s paintings were priced higher, and when he sold fewer works at a showing than his peers). 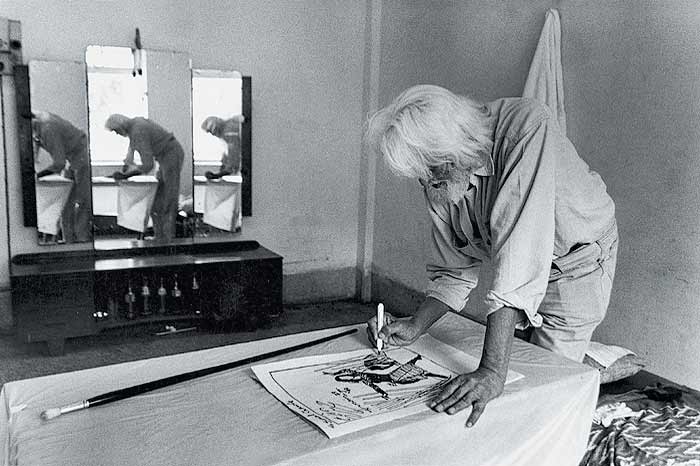 But he also always let younger artists flourish. Artist Arpana Caur remembers Husain was the first to buy her painting at her solo show in Bombay in 1980. “My career started in 1974 with Husainsaab selecting three works for a Delhi group show. Six years later, I booked Jehangir Gallery in Bombay, where I knew no one. Imagine my surprise when I saw Husainsaab, down on one knee, photographing a work called Custodians of the Law. He’d bought it—it cost Rs 3,500—and when his gallerist came to pay me, he bought four more. It was a turning point for me.” From taking art to villages through roadshows to making special gestures to friends, Husain touched lives in his own way. Akbar Padamsee, a contemporary, relates how 10 years ago in Paris, Husain bought a Volkswagen car for him so he’d never have to take the bus again. “Even though I paid for the car later, I was thrilled at the gesture.”

“I’ve never had a day’s sickness in my life. It’s due to the acupressure created by the ground against my feet.”
On walking barefoot

Author Shobhaa De, who met him less than two days before he died, fondly recalls a drawing for her from Qatar on her birthday. “His mind was vibrant but his body was broken; he took whiffs of oxygen as we talked. I knew it was the last time I’d see him,” she says. Another friend, artist Atul Dodiya, captures the essence of Husain perfectly: “He was a contemporary of every artist, young and old.” And always bursting with energy. Rajeev Lochan, director, National Gallery of Modern Art, calls Husain “a restless experimentalist”. And the avant-garde Husain Doshi Gufa in Ahmedabad reinforces that. The underground cave-like gallery that has Husain’s paintings on the ceiling was set up by the artist and his long-time friend, architect Balkrishna V. Doshi. Remembers Doshi, “Husain jokingly asked me, ‘Gufa banega kya?’ when he saw the design, and the name stuck.”

The Amdavad ni Gufa and galleries around the world showing his work will probably witness a major spurt in visitors, wondering if the artist really had to be hounded out of the country. Raza feels “it’s sad that he had to die in exile”. Perhaps he never thought he would. As Dodiya puts it, “Whenever we asked him about coming to India, he’d say, ‘I am coming back soon’.”

By Arpita Basu with Smita Mitra and Neha Bhatt

Origin Of The Species