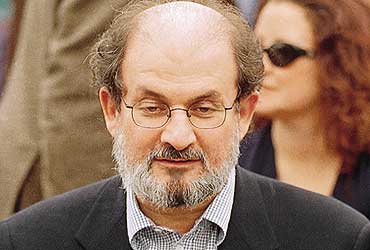 But first, the facts. The latest from Salman Rushdie is a miscellaneous grab-bag of bits and pieces by the great man. There are essays here, and newspaper columns, and prickly public correspondence dating from what Rushdie identifies as "the plague years", when he lived in the shadow of the famous fatwa. Finally, there is the text of two lectures on ‘Human Values’ that Rushdie delivered at Yale earlier this year—‘Step Across This Line’. Many of the essays are familiar from earlier incarnations: the Wizard of Oz essay introduced the book of the film; the infamous ‘Damme, This is the Oriental Scene for You!’, about the greater worth of Indian writing in English, as against that in other Indian languages, appeared in the New Yorker...I suspect there is very little here that has not been published before, though some of it needn’t have been. Still, it’s good to have these essays collected in one volume. ‘Columns’, spanning the period from December 1998 to March 2002, offers a kind of melancholy commentary on these years—from the deliberately sabotaged prosecution of Pinochet to the horrors of Gujarat, on which Rushdie’s plainspeaking is particularly salutary: "...in India, as elsewhere in our darkening world, religion is the poison in the blood....Yet we go on skating around this issue, speaking of religion in the fashionable language of ‘respect’. What is there to respect in any of this, or in any of the crimes now being committed almost daily around the world in religion’s dreaded name?"

These are also the years of Rushdie’s own move to America—a move, it appears, somewhat more than merely geographical.