That Guy With The Nifty Quiff

‘It’s Tintin, and he’s in London,’ said Thomson. ‘At Somerset House, to be precise,’ chimed Thompson. 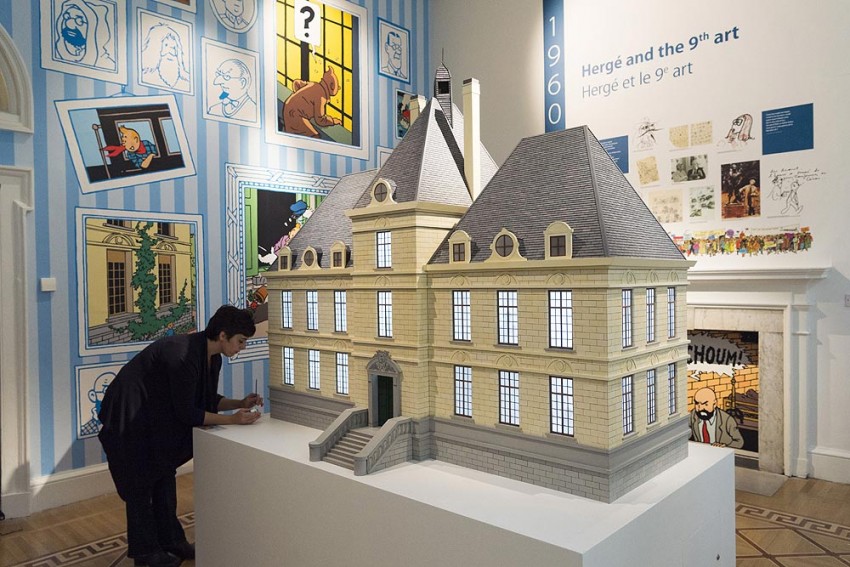 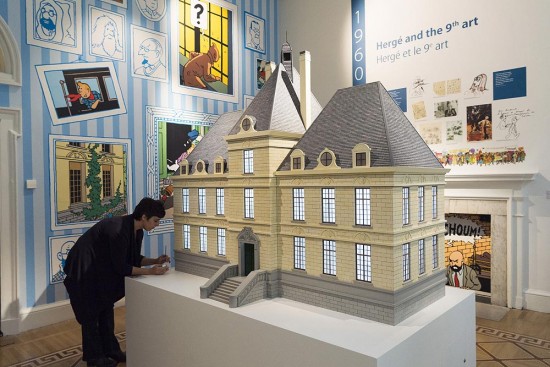 Michael Farr, one of the world’s leading ‘Tintinologists’, tells an anecdote from one of his many meetings with Herge: “In the 1970s, I was at his office in Brussels, and he pulled out this letter he’d received from Delhi. It was add­ressed to ‘Mr Tintin, Brussels, Belgium’. It was from a 10-year-old Indian boy who had just discovered Tintin, and wrote how he loved the books and wanted to model his life on Tintin. Herge had tears in his eyes and said how amazing it was that this boy thousands of miles away was inspired by Tintin, who Herge had created 40-odd years before to entertain Belgian children. He was so moved by that.” That young Indian fan could just as easily have hailed from Denmark, Japan or Colombia, such is the global appeal of Tintin and his stellar cast of eccentric friends, obnoxious acquaintances and the occasional nemesis.

As a new exhibition in London proves, the world does indeed love Herge’s finest creation. ‘Tintin: Herge’s Masterpiece’ features original artwork and models of Tintin scenes with finely crafted figurines and sets, including a parade from Tintin in America and a car chase from The Seven Crystal Balls. Plus a scale model of Marlinspike Hall, Captain Haddock’s ancestral home, repossessed at the end of The Secret of the Unicorn, which is modelled on Chateau de Cher­verny.  It took four months to make, with 6,000 roof tiles.

Seeing the evolution of Herge’s traditional newspaper animations to the celebrated clean lines that enraptured comic fans, political obsessives and graphic artists the world over is a joy for the whole family. Stephen Doherty, director of visitor comm­uni­cations at Somerset House, says of the 18th-century London building, “This is a setting that could easily be in one of Tintin’s adventures.” Not unlike the Brussels Comic Strip Centre, which has a lifesize replica of the Marlinspike steps—complete with loose tile. Adds Doherty: “As you wander through the Georgian rooms here at Somerset House, it’s hard not to feel like you may discover a secret passage or a villain in disguise.” Indeed, one half-expects Nestor the butler to wander past in his pinstripe waistcoat to announce brandy will be served on the terrace. For ‘Tintinistas’ it’s a must; for everyone else it’s a treat. 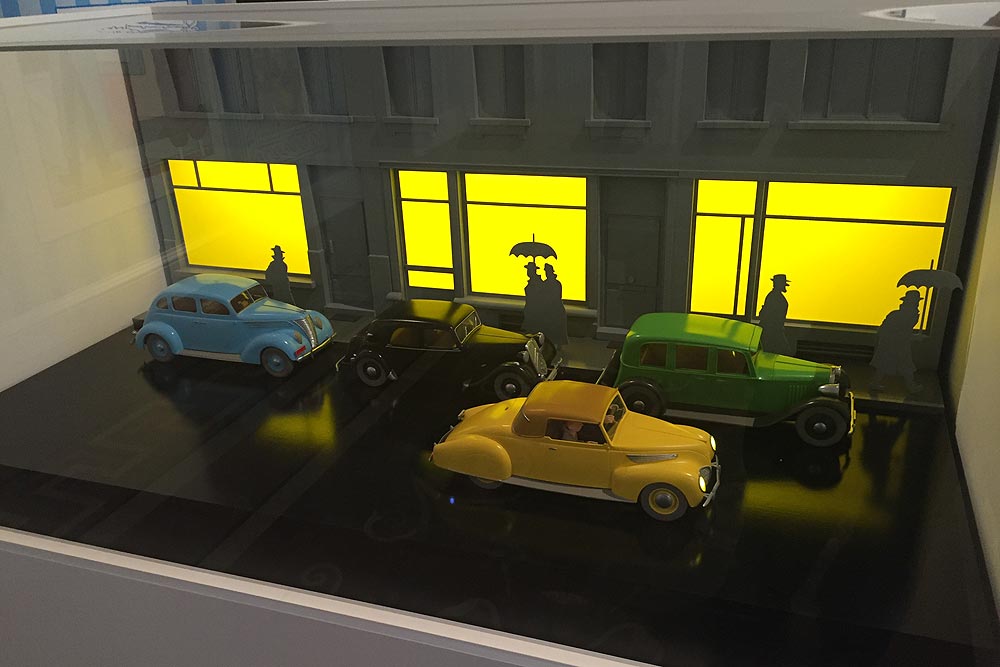 A Chase A tableau from one of the Tintin books, with replicas of cars

Ostensibly a reporter (who rarelyfiles any stories, as hacks like to joke), but also an adventurer, crimefighter and diplomat, Tintin is a talisman of honour and dignity. Thank God then for his ext­ended entourage and a fabulous cast of minor characters—from Jolyon Wagg, the insurance salesman, to General Alcazar, the despot-in-waiting—adding much needed spice and sleaze to balance out his boy-scouty wholesomeness. But just what is it about this unassuming Belgian that makes him so popular?

Farr believes it’s down to Tintin being essentially an abstract figure. “He’s basically just a blank face with two dots,” he says. “Which means that any reader—boy girl, European, Asian, African—can slip into his shoes and launch themselves into these incredible adventures. And part of that is because everything around him is so highly realistic: every car model is exact, planes and buildings are true to real life,” says Farr. Plus the other characters are so well defined—Captain Haddock with his wrinkles and bags under his eyes; Prof Calculus, who is batty but brilliant, and of course based on a real person (the Swiss physicist Prof Auguste Piccard, who taught in Brussels for a time); plus Bianca Castafiore, who came to be like the soprano Maria Callas in her later years—it’s a winning formula of having a realistic setting but a blank canvas for a protagonist.

Marie Fournier, who teaches a course called ‘Reading Tintin’ at University College, London, believes the character is a touchstone for common decency. “Tintin very quickly developed into a myth and a symbol,” she says. “Even though he definitely projects a western, European (and in the first books, Belgian) perspective onto the world, he also came to represent basic universal values: justice, loyalty, honesty, courage. Plus, the fact that Tintin is a globetrotter clearly adds to his appeal around the world.” As for the world itself, many argue that Herge’s own political journey mirrored that of Tintin—he starts off fighting communists in Tintin in the Land of the Soviets and promoting colonialism in Tintin in the Congo, and ends up a revolutionary guerilla tackling corporations and interchangeable military dictatorships in Tintin and the Picaros. “Herge worked at a newspaper and would have liked to have been a foreign correspondent himself, but created Tintin as a substitute,” says Farr, who has been the foreign correspondent for Reuters and The Daily Telegraph. “Having access to all the international press, he could see exactly what was happening in the world and was on top of current affairs, and sent Tintin into the midst of it all. Tintin in the Congo remains the most problematic book for critics, who say Africans in it are depicted as little more than half-witted savages, and yet it remains one of the most popular titles in Africa, and especially in the Congo.” As Fournier explains, the problem is that many critics of the book refuse to place it in context. 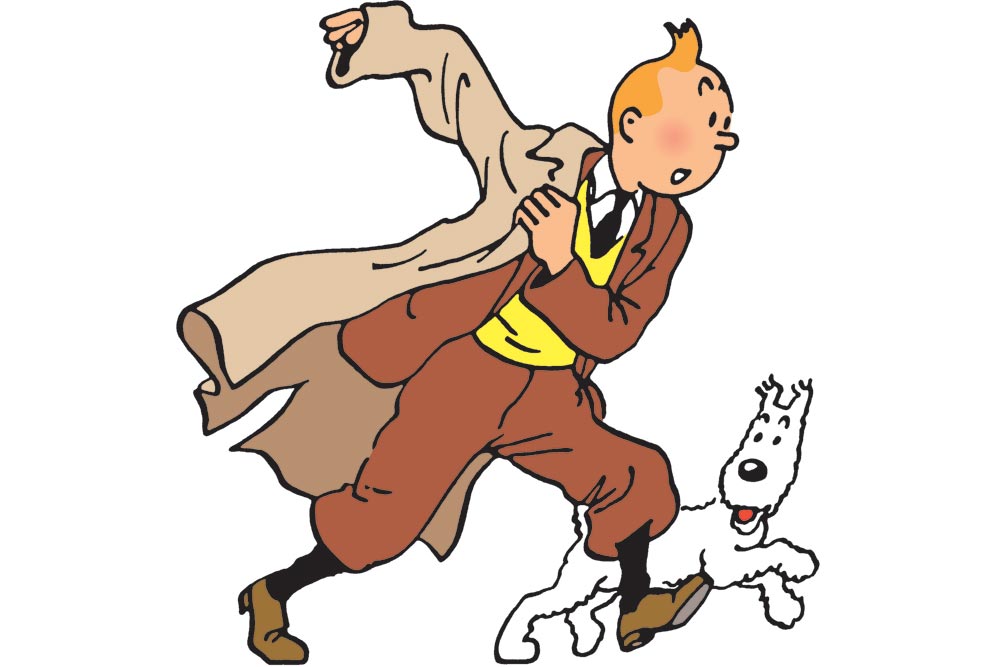 "Labelling Tintin in the Congo as racist is an arguable point. The historical context should definitely be taken into account. Stereotypes may be constructed in the west, but there is no predicting how they will be deconstructed in the place of consumption. We should also remember that stereotypes reflect an image of those who construct them, which is why many people in the DRC actually find Tintin in the Congo rather amusing."

This perhaps resonates with India, which has had a love supreme for the books since day one. The country appears in both Cigars of the Pharaoh and Tintin in Tibet—where Captain Haddock naturally gets into a bother with a holy cow blocking traffic in Delhi. Indeed, your British-born correspondent’s Tintin obs­ession was formed as a nipper among the bookshops of Calcutta, thanks to a very cool uncle. Farr knows of the Indian passion only too well, saying he gets heaps of correspondence from there. “I always hope that the wonderful literary festival in Jaipur will one day have a section devoted to Tintin—I certainly live in hope of an invite one day,” he says. In India, for many years, people read Tintin in English, and the books were coveted and passed down within families—that of course meant the stories were available to a limited class. The jump to Indian languages meant the books were more accessible.

Perhaps too much analysis occludes the real appeal—Tintin is riveting and fun. From smashing slavery rackets (The Red Sea Sharks) to space travel (Destination Moon) and one of my personal favourites, dealing with the kidnapping of the loathsome billionaire Lazlo Carreidas (Flight 714)—we laugh, we think, we empathise, we sympathise, and we enjoy ourselves.

Accent On The Clipped