The bowlers will hold the key, but the Aussies know the subcontinent better now 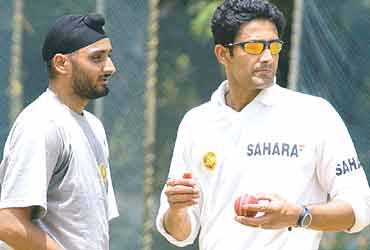 outlookindia.com
-0001-11-30T00:00:00+0553
An India-Australia game, particularly a Test match, almost invariably results in some of the best cricket on view in contemporary times. While our recent record would prove that we are the better team, the Indians have got the better of us in the last two Test series. The Indians always seem to perform above their normal level when they are up against us, which is why the Border-Gavaskar trophy is one of the most important pieces of silverware in cricket. It also is the only one that is not in our cabinet right now. This has only added to our resolve to do well this time round, and while I'm not part of the squad in India just yet, we have discussed this series often enough to know how keen these guys are to cross this final frontier.

The Indian team derives its strength from its formidable batting line-up. The middle order has been the same since 2001, but the openers have changed. Virender Sehwag and Akash Chopra really served their team well in Australia, since they almost always saw off the new ball. We got Chopra early this time, and that partly accounted for the collapse. Sehwag is not your regular opener, his technique is not perfect but he has a great eye. His form in recent odi tournaments has been far from impressive, but he seems to be sticking it out now.

Generally speaking, players like Sehwag rely on momentum, something he has been lacking in the early part of the season. We were successful against Sehwag during the TVS Cup last year and I hope we can continue that trend. We kept him under pressure by denying him scoring opportunities. The result was that he was forced to take chances which invariably cost him his wicket. With players like him, it's important to take the first chance that is offered, or he makes us pay for the lapse.

Chopra seems a little iffy for the opener's slot, with some competition. They should stick with him, for he and Sehwag really complement each other because he is everything his partner is not. He is dour, determined, puts a high premium on technique and scores at a slow pace. His ability to occupy the crease ensures our pace bowlers are not able to get into the middle order. It was one of the main reasons for India's great performance Down Under.

The rest of the batting stays the same, Tendulkar's absence seeming to be only for the first Test. Tendulkar and Laxman always reserve their best for Australia, and Dravid—his Bangalore duck notwithstanding—seems to have caught the affliction as well. He was truly outstanding in Adelaide last year, and one of the highlights of this series will be the encounter between Warne and Dravid.

The bowling department will possibly be better than the last time, when Harbhajan Singh was a one-man army. This time there will be Anil Kumble, who was in fine touch last year. In fact, I think it will be Kumble who will be more successful this time round. The pace and bounce makes him the more dangerous bowler on a fifth-day wicket. Both Kumble and Harbhajan have come back from injury breaks, but they have played enough one-day games to get back into the swing of international cricket.

The pace bowling will be greatly improved thanks to the presence of Irfan Pathan. He has the ability to swing the new ball and also manages to get sharp reverse swing with the old ball. This will be his first Test in home conditions, so it will be interesting to see whether he will be as successful as he has been over the last 10 months. On paper, the presence of Kumble, Harbhajan and Irfan makes this a better attack than the one in the 2001 series.

Having said that, our batting is a lot better equipped for these conditions than we were last time. As a result, the likes of Harbhajan and Kumble may not get as many wickets as they did in the last two tours.Our success against Muthiah Muralitharan has instilled a great deal of confidence in the batsmen. In fact, our recent success in Sri Lanka will be a crucial factor in this tour as well. The 3-0 margin in that series proved to us that we can do well in the subcontinent. Murali is one of the greatest bowlers in business today, and all our batsmen scored well against him on really dry, cracked surfaces.

Crucially, our bowlers also learned a thing or two about bowling on those wickets. Warne and Kasprowicz were really amazing and now we also have the talent of Glenn and Lee at our disposal. From our point of view, I feel really confident about Shane Warne doing well in India. He has never really had a happy time against the Indians, particularly in India. One of the main reasons is that he was not fully fit in either of the earlier tours. This time round, he has worked out a couple of new tricks for Indian conditions and it's amazing to see a bloke so eager to learn and experiment even after a decade and more in Test cricket.

I had mentioned the Dravid-Warne face-off, but that does not mean that the great leggie has no designs on the likes of Laxman and Sachin. Warne smarted over Laxman's assault in Calcutta for a long time, and he will be looking forward to coming up against him once again. I'm happy for Michael Clarke too, who made his debut in my place a really smashing one with his 150-odd. He is a really promising and diligent youngster, and has actually earned his place in this side. Gilly too pulled out the goods with a fine century, and Katich probably missed a well-deserved one. 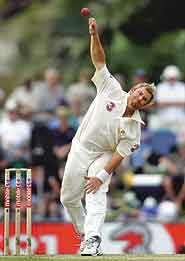 The Australians have their bench strength to thank for our dominance of the last few years. Clarke would walk into most sides in international cricket, but the lack of vacancies forces even someone of his calibre to have to wait in the wings. He may have been nervous about playing in front of so many, it can unnerve even seasoned cricketers. But few players have the opportunity of starting out in India, and he had a dream debut on a dusty pitch.

To say I am shattered not to be in Bangalore would be an understatement. I was the only batsman who really had a miserable time in India last time. I was really looking forward to scoring plenty of runs and making amends this time round. No injury is ever well-timed, but this one could not have come at a worse moment. The silver lining is that the finger is healing well and the doctor feels I should be ready for the third Test. I am doing light training at the moment, but have still not held a bat. I will be having another X-ray on October 14. If all goes well—and there is no reason why there should be a problem—I will join the squad in Chennai, and prepare for the Nagpur Test. This is going to be one memorable series, and I am going to be a part of it, sooner or later.

A Crocodile In The Swamplands