Cellphones ring. Five-star rooms are booked. The men are natty. The girls, hep. A look at the capital of sin. 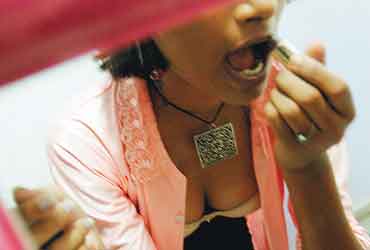 It is through an acquaintance that I meet Narender, the pointsman of one of Delhi's biggest pimps. He fixes an appointment for Friday, 8.30 pm, at a five-star restaurant. Rita, he says, is a "good girl from a respectable family and speaks English. She is a favourite with many of my clients". Even as we speak, Narender's mobile keeps ringing. It's one enquiry after another. "In this dhanda, one is always busy," he says. Before I leave I am told that I should be there on time. If there is any change of venue or time, I would be informed.

Rita is on the dot for the appointment, dressed in a white cotton top and black trousers. Heads turn because she is tall and has a figure which she does not hesitate to flaunt. Pleasantries over, she is a little bemused that I am meeting her only to pump her for info. But she gradually eases into talking about her profession. "Yes, it's a life which I have got used to. Good money and fun," she shrugs. Her clients are mostly businessmen and some of them are even "faithful". Rita has been in the business for two years now.

Doesn't she feel uncomfortable dealing with strangers? "Look, we operate through an established network which helps us carry out the business without hassles. There is no tension," she says. Rita claims a weekend of work gets her Rs 50,000. When she started out, there were not many girls from good families. "But now there are many. It has almost become respectable," she says, with a hint of sarcasm.

Among Delhi's high-flyers, party-hoppers and wannabe socialites, 'good sex for good money' is the new buzzphrase. Which is why the city is labelled by many, including police officials, as the new sex capital of India. Going by sheer numbers, Mumbai has more sex workers than Delhi. But when it comes to providing sex for the well-heeled and the powerful (read politicians, bureaucrats, businessmen, fixers and middlemen), Delhi is the new hot spot. Call it the oldest profession, but here it's got an all-new five-star sheen. Police estimates put the annual turnover of the entire flesh trade in the capital at Rs 500 crore. Says Delhi's crime branch chief, Deependra Pathak, "The business is very clearly booming. When it comes to upmarket prostitution, Delhi is the new nerve-centre."

The five-star call girls don't fit the stereotype of the emaciated and exploited sex worker. Neither do the women wear loud clothes, garish make-up and solicit customers under murky street lamps. The girls are moderately educated, confident and sophisticated—answering to the description of coming from "good families"—and are comfortable with five-star plushness and farmhouse revelry. They drive cars and operate through cellphones. Points out a senior police official: "Some of the women we have come across during our recent raids were a shock to us. They spoke good English and were educated. They didn't fit the bill of the traditional sex worker we normally come across. They seemed to be from decent families. Some of them were even working women who were simply out to make some quick money."

Sonia, 32, is one such convert. She has profited enormously from the trade. Once a part of the fashion frat, her career took a nosedive and through 'contacts' she managed to hitch her fortunes to fat-cat clients. There has been no looking back. "Things were in a bad shape then. You get used to a lifestyle and then you can't suddenly give it all up," she says. She has now moved to a posh locality in the city, and has bought a car. "I know you might call me a cheap woman but what could I do? Now everyone is happy, even my folks. Of course, they don't exactly know what I do," she says. Her parents are away at Chandigarh and live a retired life. Sonia makes it a point to visit them once every three months."I make up for all that I am doing by taking them gifts," she says.

For many women things are not as simple. Leading a double life—playing the smart neighbourhood girl on weekdays and dashing off for weekend liaisons with strangers—has cracked many. Says Sonia: "It is alright if you are on your own. But if you live with your family it becomes difficult. Some girls I know actually come from conservative homes and have to cook up excuses every time they have to spend a night out."

Girls from middle-class families are in it initially for the "kicks" and "quick money". Most of them are starry-eyed and wish to be part of the glam set: models, movie and TV stars. To kickstart such a career requires money. An easy way to get it is by making a few extra bucks on weekends. While some opt out after one or two dates, others get hooked. As Rita puts it, "Since the money is good we can have a cool time—weekends in Goa or even travel abroad. The girls know there is a price to be paid. But we don't care."

Some girls even operate independent of the pimp but they run the risk of picking up the wrong sort of client. However, the police say women are far better off minus the pimps. "If you see the trend in Delhi, it's a liberation of sorts for call girls. Increasingly, sophisticated call girls avoid using pimps and that makes transactions more clean," says Pathak. The trade has grown in Delhi because, as the capital, it is here that major deals are brokered. And politicians and bureaucrats need to be entertained. Also, there is a lot of money floating around. Clients, ranging from the retail shopkeeper in Connaught Place to restaurant owners in Rohini and real estate developers in Gurgaon, are all willing to splurge. To service them, a number of guest houses have come up which double up as brothels. In south Delhi, the trade is run from respectable residential colonies. And farmhouses hired for sexual orgies have been the targets of police raids.

In one such swoop last month, three women and five pimps were arrested from a farmhouse in Vasant Kunj, in southwest Delhi. One of the women, an economics graduate from Bangalore, used to spend about 15 days a month in the capital and earned up to Rs 1.5 lakh in that time. All the three women, aged 18-21, charged anywhere between Rs 5,000 and Rs 10,000 a night and their clients were businessmen and lawyers.

Outlook's investigations show that upmarket prostitution thrives in the capital—the 15 raids undertaken by the police last month are an index.Take Queen Bee (QB to the trade). She operates out of Greater Kailash, an upscale residential area. QB is one of the biggest suppliers of girls with a wide network. She not only provides "good" Indian girls but also keeps Moroccan women in her house. Arrested in a raid in the early '90s at a five-star hotel, QB's network today has the backing of both influential politicians and businessmen.

Says a cop: "It will take a lot to bust her, given her links." According to those who have dealt with QB, who works strictly on references, she rakes in close to Rs 3 lakh a day. The asking rate for any of the girls, say clients, is in the range of Rs 30,000-35,000 for a night.