US bombs pound to rubble everything but Taliban resolve; as for the biscuits, they burn in the fire of rage 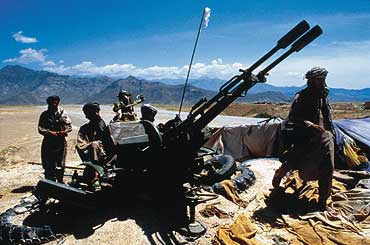 outlookindia.com
-0001-11-30T00:00:00+0553
It's a war of bombs and biscuits, of Cruise missiles devastating ramshackle buildings and destroying airstrips and radars in disuse for years. And then follows massive airdrop of food packets—37,500 a day—containing bean salad, peanut butter and strawberry jam. It's a war of green TV screens, punctuated by blobs of glow and commentary redolent of a golf tournament. It's a war of passion against precision, of foolhardy stubbornness against senseless might, of a medieval worldview against unseeing technology.

The relentless bombing of Afghanistan could leave wounds so deep they might never become scars. The first two days of the US attacks involved 20 long-range bombers, 35 carrier-based aircraft and 65 Cruise missiles. The bombing became even more severe on Wednesday night, killing 200 civilians in Kooz Kurham village, Jalalabad. On Thursday there was a slight let-up before picking up again on Friday morning. Bar Kurham was completely devastated.

For the moment, though, no one is counting the dead and the wounded. With bated breath the world watches the war reach its most decisive stage—the launch of ground attack, of special forces being paradropped into Afghanistan to flush out Osama bin Laden and his lieutenants. That ground was imminent became obvious with Pakistan offering its facilities at the Pasni air force base in Baluchistan and at Jacobabad in the Sindh province.

Three C-130 transport planes had, in fact, arrived at the Pasni base even before the US began its bombing. Pasni's significance also stems from the fact that the Pakistani navy maintains a shore establishment, pns Makran, there. Eyewitnesses say the US has already started using the heavily-guarded Jacobabad airport, that at least 10 American aircraft and three helicopters are parked there in readiness.

The bombings provided their first results on Thursday: Chaghcharan, the capital of Ghor province in central-west Afghanistan, fell to former Herat governor Ismail Khan's troops. This was the first setback the Taliban suffered since the aerial strikes began.

It was Karim Khalil's Shi'te Hezb-i-Wahdat, which controls Yakawlang district in the neighbouring Bamiyan province, that first announced Chaghcharan's fall, though the bulk of fighters who fought to take control of the capital owe allegiance to Ismail Khan. Chaghcharan had changed hands several times between the Northern Alliance (NA) and the Taliban. Though it doesn't enjoy much strategic importance, the loss of Chaghcharan could have a demoralising impact on the Taliban.

Not only does it have to endure a superpower's aerial strikes, it has to combat the NA, now reportedly bolstered by assistance from Russia, Tajikistan, Iran and Uzbekistan. The fall of Chaghcharan could also put Taliban fighters under immense pressure in Mazar-e-Sharif, Aibak, Shiberghan, Maimana, Taloqan and Baghlan. Ismail Khan's military gains in Ghor would inspire his supporters in Herat and Farah provinces, apparently lying low until now, to begin actively plotting the Taliban's downfall.

Meanwhile, on the Afghanistan-Uzbekistan border, the NA has decided to hold back its firepower till the end of air strikes. NA commander Adbul Rashid Dostum told Outlook: "We've not been able to capture Mazar-e-Sharif because no help has been forthcoming from Russia or Uzbekistan." But if Dostum deputy Sayed Nurullah is to be believed, "the Taliban forces are demoralised, and wouldn't be able to endure once the NA launches an attack".In fact, desertions from the Taliban ranks have already begun. According to Dostum, 40 Taliban field commanders and 4,000 fighters were captured by his forces on September 11 with the help of some other Taliban commanders who had decided "to change sides".

That this war could witness unforeseen twists became obvious last week, when the Islamic Movement of Uzbekistan (imu) leader Tahir Yuldash declared that his outfit will be "together with the Taliban against the US and their betrayers (read Tajikistan and Uzbekistan)". Nurullah confirms: "Among the Taliban are also imu recruits."

The biscuit aspect of the war hasn't produced telling results though. Food packets dropped after the first day of bombing led to quarrels over distribution. But Monday's bombing angered tribals in Khost and Logar provinces and they collected the food packets and set them on fire. "The tribals not only burnt the food items but announced severe punishment for anyone found carrying the packets home. The US wants to purchase our national and religious pride by dropping food items to balance out the bombing of our country," fulminated an angry Taliban leader. Burning of food packets was also confirmed by independent sources, testifying to the problems the US could face in its attempt to win over Afghans.

The US has targeted practically all old camps and hideouts of bin Laden. The Taliban sources say the first-day air strike in Kandahar was primarily aimed at areas near the airport where families of bin Laden and his Arab followers resided sometime ago. Several villagers were killed in the process. Mewand district was targeted because it was suspected to be a bin Laden hideout. The old mujahideen base of Tora Bora in the foothills of the Spinghar (White Mountain), near Jalalabad, where bin Laden had spent some time after he came to Afghanistan from Sudan in 1996, also came under heavy attack. Besides, the Americans relentlessly bombed Urozgan province (its capital Tarinkot is the birthplace of Mullah Omar), following intelligence report that bin Laden had built hideouts in its inaccessible terrain.

That Mullah Omar had survived the strike on his home in Kandahar was borne out by his interview to the bbc Pashto service. Giving a clarion call to Muslims worldwide to wage jehad against the US, he argued that its attack on Afghanistan was unjustified, that the country had been bombed because it was the only true Islamic state.

Even as early as Monday night Mullah Omar had talked to his military commanders on their wireless sets, in an attempt to boost their spirit and inspire them to fight till the end. Education minister Mulla Amir Khan Mutaqqi told Outlook: "It was a pep talk. He said the jehad against the US and its allies must continue. He also gave instructions on how to cope with the situation in the face of the American aggression."

Till late last week the Taliban leaders sounded adamant about enduring and countering the US onslaught. For instance, Niamatullah Shaheen from Kandahar told Outlook: "The US is able to inflict damage on us at will. Yet our morale is high and we will not surrender to the military might of any superpower. For us the only superpower is Allah." If only words and sentiments could win wars, the Taliban would have nothing to worry about.