There may or may not be a method to Shiv Sena’s madness but there are motives for sure. Its blow-hot, blow-cold stance on Shahrukh starrer My Name is Khan resulted, till Thursday night, in the kind of pre-publicity no actor or filmmaker would desire. But for a party in decline, unable to attract numbers in a membership drive last month, and stung by the one-upmanship of Congress scion Rahul Gandhi last week, a faceoff with SRK meant free publicity and renewed relevance.

Nervous cinema owners were weighing Chief Minister Ashok Chavan’s repeated assurances of peace and security if they released the film on Friday as scheduled. Till late Thursday night, owners dithered. Mumbai turned out to be a prestige point: Chavan wanted the release, sounding almost like the film’s maker or publicist; owners of some 70 theatres wanted SRK and director Karan Johar to settle the row with the Thackerays; SRK hung between the business of films and his ‘integrity...and Indianness’. With the Mumbai market fetching about 20-25 per cent of the revenues, for a film that cost Rs 90 crore, the stakes are high.

However, the Sena-Khan faceoff is only a side story, though an absorbing one. Following Rahul Gandhi’s visit to Mumbai on February 5, when he effectively took the wind off the Sena’s sails, it retreated on the SRK issue, with the wounded justification—“We have no interest in being the only ones to fight the patriotic battle.” SRK returned from the US, reiterated he had nothing to apologise for, and was hailed for standing up to the Thackerays. “Both the boys made us look like the stuffed tiger on the drawing-room wall,” said a top Sena leader.

However, barely 48 hours later, film director Karan Johar was meeting the CM and police commissioner D. Sivanandan, asking for a safe release of the film. Why? Because the Sainiks were back on Mumbai’s streets on Feb 8, tearing off film posters and threatening  dire consequences if the film was released. And was it just coincidence that Union agriculture minister Sharad Pawar had met Sena chief Bal Thackeray at his residence Matoshree the night before the Sena’s U-turn?

The truth is, both the Sena and Pawar’s Nationalist Congress Party (NCP) are seeking to realign political equations in the state. For Pawar, after a public berating on the price rise and the mishandling of the agriculture portfolio, it is time to turn the tables on the Congress. For Uddhav, it would mean an opportunity to cleave into the government, given his pathetic record at winning elections. For both, the anti-Khan movement serves as a handy tool to refine political equations in the state.

And so the Sena returned to the warpath. Even as it ignored India’s other film icon and Indo-Pak peace ambassador Amitabh Bachchan sharing the dais with Pak actor Zia Moheyuddin at a poetry recital function in Bandra, Sainiks worked at spreading the threat of violence against SRK and the film deep into the distributor-exhibitor fraternity and ratcheting it up across Maharashtra to a scale that would test the state administration’s steel. CM Chavan was moved to threaten to withdraw Uddhav’s Z-security while the Mumbai Police put into custody 1,825 Sainiks, including shakha pramukhs who usually oversee all protests and demonstrations for the party.

It took no time thus for the Sena-SRK standoff to become a Sena-Chavan/ Congress battle and for the Congress-NCP chasm to widen. Under pressure from the Centre, Chavan had bypassed state home minister R.R. Patil of the NCP on Uddhav’s security cover. A miffed Uddhav declared he was returning all security; Sena MPs and MLAs echoed him (though there was hardly any change in the security cover). Sena MP B.K. Raut said, “Chavan as CM is only the custodian, not the owner, of the state and does not have the authority to decide on anyone’s security.” 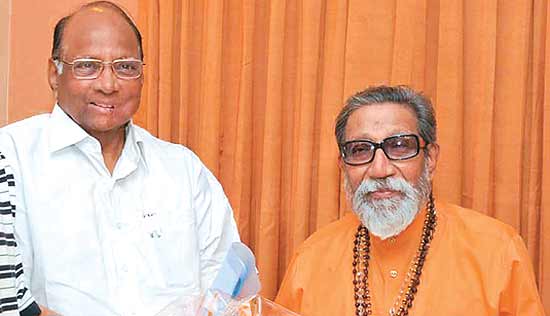 Too cosy? Pawar with Balasaheb

Two, Pawar’s meeting with the Thackerays forced Chavan to up his ante, if only to show that his government was in command of the situation in Mumbai. “Under the guise of protecting the city’s theatres, Chavan is spreading terror. This is Italian Mussolini raj,” Uddhav told Outlook. Sena organ Saamna claimed Chavan had prevented SRK and Johar from “settling the dispute” with the Thackerays.

Chavan was under fire not just from the opposition but also from his ally and some of his own partymen who believe he “misread and mishandled the situation from day one”. “The image of Pawarsaheb and Thackeray together when his coalition government in the state was ranged against the Sena was the worst thing to happen,” says a Congress cabinet minister.

With the momentum going their way, Pawar’s meeting the Thackerays could assume added significance. The Sena and NCP together don’t make the numbers—NCP’s 64 and Sena’s 45 total just 109 in the 288-member assembly, but Independents and breakaway factions in other parties could do the trick.

Sena sources foresee two possible future scenarios. The first and preferred one would be to keep the BJP out—given their soured relationship recently—and cobble together a coalition of 137-odd, enough for a working majority. “MNS’s 13 MLAs won’t count as they can’t vote against us, nor vote with the Congress,” says a Sena leader. A powerful Union minister of the NCP is reportedly opposed to this, as it would mean NCP forsaking power at the Centre. The second scenario is to keep power at the Centre but split the NCP in Maharashtra; with Pawar’s nephew Ajit leading the charge, this faction would team up with the Sena and the BJP to make the numbers, ending in a win-win situation for all: Pawar, Uddhav and the BJP.

Late Thursday night, Chavan was exhorting Mumbaikars to go to theatres and watch the film, making plans to take in a show himself at the only theatre in Mumbai that had not cancelled the release, and lamenting that the police had to contend with such disruptions instead of tackling Naxalism and terrorism. “The world’s watching,” he told the Sena. Frayed nerves, battle calls, a city on edge—all for a film? Nah, there’s more at stake.