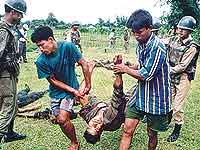 Terror stalks the whole of Northeast and Tripura is no exception. But it’s the Left Front (LF) government in the state, perceived by the tribal militants as a representative of the outsiders (particularly the Bengalis), which has to bear the brunt. Less than a fortnight ago LF leaders from Tripura and West Bengal had submitted a memorandum to Prime Minister Atal Behari Vajpayee, asking his government to pressure Dhaka to close down at least 51 camps being operated by Indian militant groups inside Bangladesh. Simultaneously, they had requested the Centre to demand the extradition of 20 Tripura militants from that country since they threaten the internal security of the state.

And when the banned National Liberation Front of Tripura (NLFT) killed 20 jawans of the Tripura State Rifles (TSR)—the armed wing of the Tripura Police—in a surprise attack on August 20, it became clear that the fears of the LF leaders were genuine and that they weren’t victims of paranoia. The ambush has been described as the "most daring one in Tripura" in the past three years. The NLFT also took away 17 self-loading rifles, a light machine gun and a huge crop of ammunition from the TSR truck.

The police top brass were stunned by the ferocity of the onslaught. Superintendent of police (West) Anurag Dhankar said 25 personnel, including two ailing riflemen, were headed for Bishramganj when the militants "unleashed a volley of gunfire from paddy fields on either side of the road". The militants, as usual, escaped into Bangladesh just 20 km away.