Terror, Where Is Thy String? 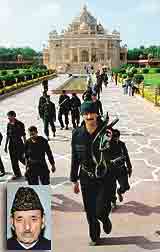 The Akshardham case, earlier considered an open-and-shut affair, seems to be getting murkier—what with too many controversial nodes erupting, one after the other. Just as the Gujarat police reached Srinagar to interrogate Chand Khan, the main suspect in the infamous temple attack case, investigations of the Jammu and Kashmir police have provided another intriguing angle to the larger picture. Khan has reportedly told his interrogators that the conspiracy was hatched in the house of pdp leader Abdul Aziz Zargar. On Thursday, Zargar resigned as agriculture minister from the Mufti Mohammed Sayeed cabinet. His role was first highlighted by an English daily of Jammu and later picked up by a TV channel as its "exclusive" story. Both Zargar and the j&k police have denied the reports, with the former saying his ancestral home in north Kashmir was locked up and the militants could have broken in. The cops claim Khan did visit Zargar’s house, but the latter didn’t meet the militant and didn’t know him at all.

According to the alleged interrogation report, in 1995 Chand Khan, a mechanic, moved from Bareilly in UP to Anantnag in the Kashmir valley. Khan was introduced to Abu Zubair, Lashkar-e-Toiba commander of the Shopian district, in August 2000 at Zargar’s house. It was apparently Zubair who later motivated Khan to avenge the Gujarat riots. As per the interrogation report, on September 18 last year Zubair again took Khan to Zargar’s house where he was introduced to Shakeel and Abdullah, the two Lashkar militants who actually carried out the attack. The next day the three left for Bareilly in an Ambassador. On September 22, the three left for Jaipur from where they reached Ahmedabad. Meanwhile, Zargar’s main opponent, National Conference’s Sakina Itto, has alleged he has close connections with terrorists. According to her, while she was campaigning for the state elections under heavy security, Zargar was moving around freely. She has threatened to file a pil on Zargar’s links with terrorists.