We need our Munnabhai, a conviction is no bar. His sins are washed away. 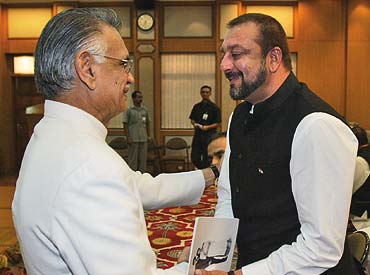 We are a strange people. We dress up young children as gods and then start worshipping them. We pour milk on idols of gods and are then convinced they're drinking it up; we're convinced the ocean is suddenly brimming with sweet water so we flock to it and fill bottlefuls, hoping for further miracles.... And we have another kind of madness: we love Bollywood stars, and when they play a role in which they have to enact Gandhigiri, we take our love to fairly worshipful extremes, imagining that the Mahatma has returned, reincarnated as a strapping fellow on a motorbike, and we set about loving him, honouring him, chasing him, asking him for quotes. Indeed, we do everything short of falling at the person's feet and actually praying.

But it's a mixed kind of worship: the person in question—in this case, Sanjay Dutt, a decidedly grown-up man in his late forties—is turned into Sanju, the affectionate diminutive providing both familiarity and tolerance, and transforming his middle-aged persona to disarming youthfulness. And then the man becomes his film personality, Munnabhai, to be admired and marvelled at. So that when he's convicted for doing something illegal—notwithstanding the fact that there were exonerating circumstances—we admire the court for doing what is right, but we admire the man too, not so much for his regret at having done the wrong thing, but because he's that precious thing, a Bollywood celebrity.

But look at where all this lands us. Last week, at a book launch to beat all launches, the Dutt family children presented the first copy of Mr and Mrs Dutt, their memoir about their parents, to the prime minister. The glittering, packed event, held at the prime minister's estate, had Sonia Gandhi as chief guest. Both Dr Manmohan Singh and Sonia Gandhi made speeches about the book, and about Nargis and Sunil Dutt as actors, and more specifically, Sunil Dutt as Congress minister and his contribution to secularism. The irony of having Sanjay Dutt, currently on bail, convicted of possessing firearms during the Bombay riots of 1992, in the audience, could not have escaped them. Nor could they, in their role as Congress leaders, avoid mentioning Sanjay, the first of the Dutt children.

Nor did the irony stop there. Although great care was taken not to have Sanjay Dutt on the dais with the PM and Sonia Gandhi, he was nonetheless photographed with Dr Manmohan Singh, Union home minister Shivraj Patil was seen embracing him, other politicians, industrialists, and media barons vied for his attention, and the photographers clicked away, following him to the tea table, to the dinner table, begging the actor for "just one more picture please", and heaven help you if you happened to come in their way. For the next few days, while the actor was in town, he was feted and awarded for being a symbol of Gandhian values, and every newspaper and TV channel treated us to a blow-by-blow account of his activities.

What is it about this man that we are so ready to turn him into a god? Can it be his skills as an actor? But there are other, equally good, or better, actors. Sure, the media chase them too (witness what they did at the Bachchan-Rai wedding). Can it be his personality? But what do we really know about the real Sanjay Dutt, except that of the three siblings, he was the one who led a somewhat troubled life but who, with family support, managed to get back on his feet.

Somewhere, then, there's a different element that enters the picture. Somehow the Munnabhai persona—the bumbling, rustic, heart-in-the-right-place, values-of-the-best-kind human being—has leached into the real person, and we no longer can separate one from the other. We love Sanjay Dutt, are concerned that the punishment he got was 'too harsh', are secretly delighted that he's been let out on bail, are glad the film industry will not lose the Rs 100 crore they say they have invested in him (and yet, when has this ever been a concern for any other convicted person, or indeed for any other industry? Why should such a potential loss be taken into consideration anyway?). And so all of us—the media, politicians, top leaders, the glitterati, ordinary people—are willing to go that extra mile for him.

But we're not willing to do the same for Zaibunisa Kazi, in whose house the weapons were stored for just three hours, who got 10 years, or for Yakub Memon, who was not even necessarily guilty, but who got death.