In the league of the recent gross out Hollywood comedies. The tone is loud, jokes are bawdy and scatological humour is in full flow 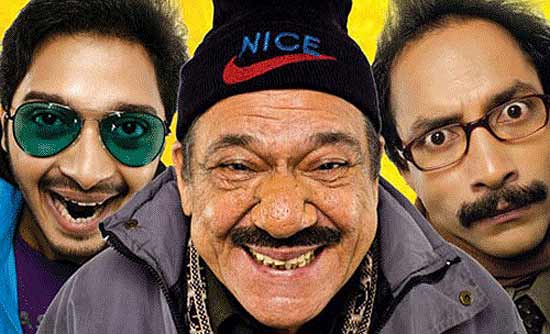 The jokey title track of the film, written by Gulzar, pretty much sums up its spirit. It’s about three brothers who can’t see eye to eye but are forced to spend two days a year together, for three years in a row, to honour a clause in their grandfather’s will. How does that bring about a change in their relationship? That’s for us to discover.

We meet them in the third year, in a snowed out, isolated cottage in Manali. Chixy Gill (Om Puri) is a petty businessman trying to get his daughters married, Happy Gill (Deepak Dobriyal) is a dentist who dreams of becoming a dry-cleaner and Fancy Gill (Shreyas Talpade) is a struggling actor of Punjabi movies with dreams of making it big in Hollywood. Chixy, Happy and Fancy might sound like Chico, Harpo, Groucho, Gummo, Zeppo, ie, The Marx Brothers, but are no match for classic Marx Bros zaniness.

Teen Thay Bhai is, in fact, more in the league of the recent gross-out Hollywood comedies. It transposes them to a rustic Punjabi setting, even throwing in scenes of a Punjabi Ramlila gone wrong. The tone is loud, the character and performance of both Puri and Talpade are deliberately over-the-top, jokes are bawdy and the humour scatological.

The film, an adaptation of a play, has long scenes played out inside the cottage, which give a proscenium feel. It depends on the characters and their chemistry with each other. Sometimes that works, like the sequences where Happy tries to take a swig from Chixy’s bottle. But the script doesn’t offer interesting situations, nor sparkling dialogue to add zing to the characters and their stupidities. It feels laboured, like Fancy’s bad English (infection for affection) and the film gets gradually unsustainable as the plot meanders to include stoned German tourists and a buffoon of a cop.

The film is watchable for Dobriyal, who manages a nuanced performance even in a broad slapstick. The other star is the awesome landscape and those beautiful snowflakes in Gulmarg. Besides, you can also discover here the father of Yuvraj Singh, who had been a superstar of Punjabi films. Beyond that there’s not much to recommend.