They are relatively new but IIT B-schools will soon rival the IIMs. 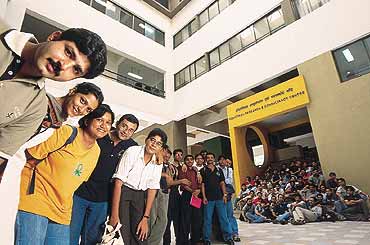 outlookindia.com
-0001-11-30T00:00:00+0553
The revelations in this year’s Outlook-Cfore survey have been the business schools in the Indian Institutes of Technology (IITs). The schools in IITs Bombay, Kharagpur and Delhi have all come in the top 20. And the surprise is they are all less than 10 years old, which makes their achievement all the more creditable.

The Vinod Gupta School of Management (VGSOM) in IIT Kharagpur was the first IIT B-school, set up in 1993, with a $2-million endowment from alumnus Vinod Gupta, chairman of the $300-million Info USA.

IIT Bombay had been offering MTechs in fields like industrial management but these were 18-month programmes and not cast in the MBA mould. "We could foresee," says Prof Mangesh Korgaonker, head of the Shailesh J. Mehta School of Management (SJMSOM), "that changes in the business environment were largely technology-driven. The gap between the technical man and the management man had to close." IIT Bombay’s School of Management (the prefix was added in 2000 after a handsome donation from US-based alumnus Shailesh Mehta) started in 1995 to offer a regular two-year management programme. The Department of Management Studies (DMS), IIT Delhi, started in 1997.

"Being in an IIT helps VGSOM tremendously," says Kalyan Chakravarty, dean. "We are a part of the globally-recognised IIT brand. We teach all that is taught in the IIMs but being part of IIT, we offer a larger number of electives. Above all, our students are part of the IIT family and share the same esprit de corps."

The IIT backdrop offers several benefits. In all three B-schools, the MBA programme is more inter-disciplinary than regular management courses. Professors from other IIT departments lecture here. Students have access to the splendid IIT libraries and the formidable IIT infrastructure. The technology orientation is clear, as it should be in an IIT. The SJMSOM programme offers four compulsory courses in technology environment systems and policy, R&D and innovations, management of technology transfer, and strategic management of technology. Most other MBA programmes offer technology courses as electives.

The IIT B-schools do accept candidates with economics, commerce or social sciences backgrounds but in actuality, most of the students are engineering graduates. Indeed, the entry criteria are so stringent that DMS would rather go with empty seats than compromise. "For the last two years, we could select only 50 students who satisfied our requirements for our full-time course and 10 seats remained vacant," reveals R.K. Baisya, head, DMS.

Yet, initially it was an uphill task attracting recruiters. The misconception of corporates that IIT B-schools’ competence lay only in systems and supply chain management had to be sorted out. Now, though, SJMSOM completes placement in two days.

Today, these schools get many of the most coveted recruiters visiting their campuses. VGSOM and DMS students received a median salary this year of Rs 3.5-3.6 lakh per annum, while the figure for SJMSOM students was Rs 5.75 lakh. The highest per annum salary offered at SJMSOM this year was Rs 13.5 lakh, comparable to the top five management schools in the country.

So how do you get IITians into the IIT B-schools? Simple: never let them get out of IITs. Explains Chakravarty, "Our students should have an opportunity of completing both engineering and management in IIT itself. They can be offered a dual degree course which will be completed in five years as opposed to six years (4+2) in IIMs. But to achieve this, IIT B-schools have to offer as good a finished product—if not better—than IIMs." What that means is that IIMs can expect some stiff competition within a few years.