Techno Beats On The Sash

The IIT-50 bash by the alumni saw the who's who laud the institution. Can the techies now take it further? 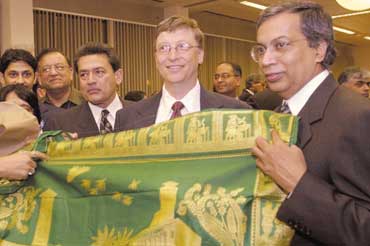 outlookindia.com
-0001-11-30T00:00:00+0553
America's most-watched television news programme, 60 Minutes, described it as "the most famous university that you have never heard about". And there's still more that Americans may not be aware of. A few thousand of its alumni are in esteemed positions—on the board of Fortune 500 companies or heading some of them, and teaching at Ivy League schools. Two of them are key aides to the two richest people in the world, Bill Gates and Warren Buffett. The search tool that millions around the world use every day—Google—has an indirect connection with it. Google's founders were graduate students of a professor who in turn was an alumnus. The 'most famous university' is a recognised brandname in technical, political and economic circles. And it won't be long before Main Street usa hears about it—the Indian Institute of Technology (IIT).

Last week, Silicon Valley-based IIT alumni played hosts to a celebration—of 50 years of the founding of the IIT—in what was termed a "pan-IIT celebration". Praises flowed freely from the who's who list of invitees including Gates, ambassador Robert Blackwill, Prof John Hennesey of Stanford University and Chancellor Berdahl of the University of California. John Chambers of Cisco Systems gave IIT a world-class institute label, while Jeff Bezos of Amazon called it a "world treasure". Ambassador Blackwill said that India, a rising great power, owes it to the contributions of IITians.

"The formidable group of alumni," as Victor Menezes, senior vice-chairman, Citigroup, described it, turned out in their hundreds to support their alma mater, and some even made generous contributions to the institution that moulded them into successful engineers, entrepreneurs and academics. Some like Rajat Gupta (McKinsey), Arun Sarin (Vodaphone), Desh Deshpande (Sycamore), N.R. Narayana Murthy (Infosys), Vinod Khosla (Kleiner Perkins), Purnendu Chatterjee (ex-advisor to George Soros and chairman, Chatterjee Group) and Kanwal Rekhi (Ensim), were easily recognisable. Others, like the genial-looking Ajit Jain who heads Buffett's Berkshire Hathaway reinsurance business, chose to maintain a low profile, catching up with old friends and enquiring if they still played bridge. Then there was Bharat Desai of Syntel, totally at home since he has kept in touch with the alumni and the IIT faculty on an active basis. "Where IIT helped me the most is in helping me to think with clarity and rigour, mostly through interactions with some very bright people," he told Outlook.

Gates, the keynote speaker who also inaugurated the celebrations, praised the IITs and said he was against any tampering with the merit selection system for admitting students at the world-renowned institution. Gates mentioned that he had two IIT grads in vice-president positions. One of them, Anoop Gupta, an ex-Stanford professor, is Gates' technical assistant. Two days before the event, Microsoft announced that Gupta would head the recently-formed business unit, Real Time Collaboration.

Said Blackwill: "We can think of India today as a technological force in the world. That vision is owed greatly to the contribution IIT has made...You (the IITans) could be the hottest export India has ever produced." Embedded in their praise for India's technological prowess was a key question: is this enough for India to emerge as an economic superpower in the 21st century?

Gates made a telling remark when he said nobody was paying attention to the fact that China's manufacturing base was in a league of its own. As he put it, India needed to create millions of jobs and the IT sector alone couldn't do it. Still, Gates was cautious in his comparison of the two economies and admitted that he was advised against it. Blackwill, however, noted the disparities between the two economies: since 1980, China has got over $336 billion in foreign investment; India has received only $18 billion."China now produces 50 per cent of the world's cameras, 30 per cent of air-conditioners and televisions, 25 per cent of the washing machines and 20 per cent of the refrigerators," he emphasised.

The writing is clear on the wall for Indian policy-makers: the next logical step is to continue their focus on both the IT and the manufacturing sectors. "In 1990, manufacturing in China was about 37 per cent of the economy; today that relative weight has increased to about 45 per cent. In the last 12 years, manufacturing as a percentage of the Indian economy has decreased, falling to about 24 per cent from 30 per cent," Blackwill pointed out.

Meanwhile, the celebrations itself ended on a high note with the alumni and their family members replaying the now famous segment from 60 Minutes. For many, it was a nostalgic trip down memory lane, the transformation from callow youths to confident young men and going on to make a name for themselves in various parts of the globe. As Mahadevan Mani (earlier M. Balasubramaniam), assistant executive officer, National research Council, Washington DC, described it: "The IIT-50 meeting was a very impressive event, a watershed in inter-IIT relations. The people I met were enormously proud to be IITans and energised to support the pan-IIT movement." It was also a launching pad for several initiatives to strengthen the brand image and help in research collaboration between the IITs and other universities in the US and elsewhere.

During the course of the two days, generous donations to their alma mater were also announced by people like Vinod Khosla (see interview) and Avi Nash, MD and partner, Goldman Sachs. As Subramoniam Shankar, president, American Megatrends, observed: "The get-together has increased awareness amongst us IITans in the US about the need for us to lend a helping hand to our alma mater and also to our mother country. IITans here are a prosperous lot. They now have time for other things!"

Mani summed it up: "If we can sustain the cohesion reflected here and successfully act on our collective vision as alumni of a world class institution, we will become a tour de force in enhancing India's well-being and engagement with the US and the rest of the world." Now that the IIT alumni have defined their charter, it is up to them to step up to the plate and deliver on the promise. "You are the crucial component in the transformation of the US-India relationship," said ambassador Blackwill. The US-India trade relationship, which he described as "flat as a chapati", needs a leavening agent. What better than the IITs and their alumni