Tears Of The Sun

Blatant US propaganda which is not even marginally veiled by any good story-telling, sensitive acting or a remote sense of celluloid aesthetics 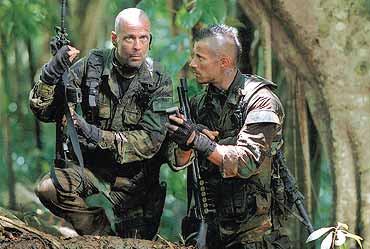 Tears of the Sun seems to have been commissioned by the Pentagon. It's blatant US propaganda which isn't even marginally veiled by any good story-telling, sensitive acting or a remote sense of celluloid aesthetics. And, its shameless celebration of the nobility and heroism involved in fighting another nation's war is only reiterated with an Edmund Burke quote: "The only thing necessary for evil to thrive is for good men to do nothing".

But our good men do a lot. The denizens of the mighty superpower lend a helping hand to the uncivilised Africans and save a tribal democracy. Bruce Willis plays Lieutenant Waters who is on a mission to rescue Dr Lena Kendricks (Monica Belluci) from conflict-torn Nigeria. But his squadron goes beyond its brief, protecting a group of refugees at the risk of their own lives. Tears... is unambiguously manipulative. Nigerians make for all the savage, ugly faces while Americans are the well-mannered guys who call women "Ma'am". The rest of them are brutes who kill in the most barbaric fashion: they chop off the breasts of nursing mothers.

This fake realism of Tears... is heightened by the ingenious ways of filming. It unfolds like a National Geographic documentary showing Africa in all its natural, primeval, wild glory. But the ostensible authenticity of images doesn't really ring true. The small American squadron takes on the entire army of Gorilla rebels like fictional Rambos. Maybe it's do with Willis' wooden act: the lieutenant's change of heart, his choice of humanity over duty is never convincing. And the phoniness of Tears... is completely exposed in the figure of the Dr Lena. Belluci manages to look incredibly sexy in the thick of the turmoil—she sports a Penelope Cruz accent, a gym-toned body, a perfect pout and an oft-seen cleavage, but hardly any depth of character. However, the most offensive scene is an abject and grovelling Nigerian lady telling the Yankee soldiers: "We love You...God will never forget you". Such ingratiation might stir a jingoistic America, but is too facile for any self-respecting third-world viewer. Maybe, I'm on the wrong side of politics. For me, Tears of the Sun is all about how easy it can be to make a film on the perceived brutalities of another man, easier still to turn it into a crashing bore of a film!