Tea On The Boil

Protesting adivasis open up another battlefront in Assam 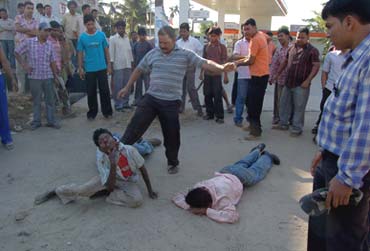 Eighteen-year-old Bhadra Munda had heard about Guwahati, its tall buildings, crowded roads and traffic snarls. When some elders from his village Khoirabari, in the northern Udalguri district of Assam, asked him if he'd like to join them for a 'mahasabha' in the state capital on Saturday, November 24, the young adivasi agreed readily. It would be his first visit to the city, whatever else the rally, organised by the All Assam Adivasi Students Association (AAASA), might be about.

When the chartered bus carrying his group snaked into Guwahati shortly before noon, Bhadra found thousands of his kinfolk, all adivasis, comprising the bulk of Assam's tea garden worker community (bracketed as the tea tribes), already there. He learnt they had gathered to press the adivasi demand for Scheduled Tribe status that would bring the estimated 30 lakh or more people like him in Assam the benefits of reservations in jobs and educational institutions, besides other sops, like their brethren in states like Jharkhand.

There were 6,000 protesters on the premises of the school field where the meeting was being held. Soon, however, the gathering started marching towards the state secretariat, taking the magistrate, Chinmoy Phukan, and six crpf men deployed at the venue completely by surprise. Not just that, along the way, unknown to the majority of the marchers, some adivasis, armed with bows and arrows and sticks, started ransacking shops and pelting stones at vehicles. Recalls C.K. Bhuyan, city sub-divisional magistrate: "When I saw adivasi rioters surging ahead and within 50 metres of a major intersection leading up to the secretariat, I ordered the use of teargas." However, things only got worse. In a retaliation of a sort never seen on the streets of Guwahati before, the shopkeepers and local residents came down heavily on the adivasis. Within less than an hour of the frenzy, a 46-year-old adivasi protester lay dead, 250 others were wounded. In the melee, an adivasi girl was stripped naked and pursued by miscreants. She was rescued by an elderly man, who gave her his shirt and she reached the safety of a nearby police station. Bhadra ended up at the Mahendra Mohan Choudhury Hospital with head injuries and a broken middle finger on his left hand. Also nursing her wounds at the hospital was Marconi Soren, an 18-year-old adivasi girl from Mornai Tea Estate in the western Kokrajhar district. "Someday, we shall get justice," she said.

For the ruling Congress in Assam, the incident could not have come at a worse time, what with the staggered panchayat polls due at the end of December. The elections are supposed to be a sort of referendum for the Tarun Gogoi government. Seemingly unfazed, the CM said, "The incident will not have an impact on the panchayat polls.". In reality, though, he knows only too well that the tea tribe votes have always been crucial for the Congress in Assam. The AAASA has already declared it will not allow any politician to enter the tea garden areas. "We shall not allow politicians to capitalise on the situation," says Stephen Ekka, a community leader who runs an NGO promoting adivasi interests in Tezpur. "The adivasis are an integral part of Assam and our grievances must be addressed."

The Assam Congress, on its part, has no problem granting ST status to the adivasis. "The Congress party and the state government has already moved the Centre for conferment of ST status to the adivasis and five other ethnic groups in Assam (Koch Rajbongshi, Tai Ahom, Moran, Motok, Chutia)," Himanta Biswa Sarma, state health minister and government spokesman, told Outlook. However, the registrar-general of India as well as the Union ministry of tribal affairs have recently rejected the demand on the ground that they are originally migrants from Bihar, Orissa, Jharkhand and Chhattisgarh and not indigenous to Assam, and, therefore, do not fulfil the criteria for consideration. Never mind if the adivasis themselves say that their forefathers had settled in Assam more than 150 years ago.

To add fuel to the fire, even as tea community leaders in the Assam Congress were desperately trying to placate their kinfolk on November 27, Union home minister Shivraj Patil was telling the Lok Sabha that the government was in no position to consider the adivasi demand for ST status. "The settlers in the tea estates have tended to lose their tribal characteristics in the new surroundings," he told Parliament. Not just that, tribal groups already enjoying ST status have been opposing the inclusion of more communities in the list for fear it would hit their interests. As Rajya Sabha MP from Assam, U.G. Brahma, who belongs to the Bodo ethnic group, points out: "With more and more communities clamouring for ST status, it's time the government took a fresh look at the entire business of scheduling. Otherwise, the benefits enjoyed by groups already in the ST list could get diluted." The All Assam Tribal Sangha, the apex tribal body in the state, has been moving the Centre as well as tribal MPs to ensure more groups are not brought under the ST list till there are adequate provisions to safeguard the interests of existing ones.

All of which serves to agitate the adivasis only further. The AAASA enforced a 36-hour bandh that hit life in parts of Assam, which has 800 tea gardens, producing more than 50 per cent of India's total annual tea production of 955 million kg. One motorist was dragged out near Kokrajhar on November 26, the first day of the bandh, and killed. Assam already has a history of ethnic riots between the adivasis and the Bodos; the latest flare-up between the adivasis and locals in Guwahati has only opened a new front. Unless passions are doused fast, Assam could see the divide between the adivasis and the majority Assamese widen. That can change the state's political and electoral dynamics, as the tea garden community controls or influences the poll verdict in over 20 of Assam's 126 Assembly constituencies.

In this situation, the November 24 security lapse could well prove dear to the Congress, never mind the official explanation that "the rally and the march were illegal" and that the adivasi leaders had apparently assured officials present that they'd hold a meeting until 3 pm and disperse. Critics of the police will always say that enough forces should have been deployed to control the crowds.