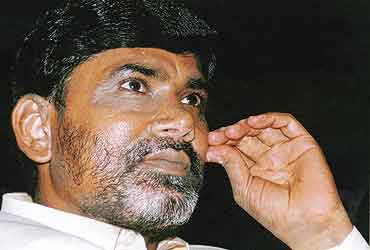 outlookindia.com
-0001-11-30T00:00:00+05:53
What are the main issues in these elections?
Good governance is good politics. Development will get votes. When I started on this path, no one could believe such development and advances in infrastructure and information technology could happen in India. Today, every commoner has a cellphone and India is on the road to becoming a superpower.

But thousands of farmers have committed suicide in AP and hundreds have died of heat stroke.
We had a problem earlier when there was a failure of the cotton crop. There are no farmer suicides now.

It’s said a demand for a separate Telangana will create problems for you.
The TDP is committed to a united Andhra. Yes, Telangana is an underdeveloped region but there are parts of Rayalaseema that are even poorer. It’s just an issue that some politicians are trying to exploit. A lot of funds have been pumped into Telangana in the past eight years and some parts of the region are doing much better than other parts of Andhra.

The PM has repeatedly asked you to join the NDA instead of supporting it.
I see no need to join the NDA. The present arrangement has worked smoothly.

Is Sonia Gandhi a liability for the Congress?
Her foreign origin is an issue for the Opposition. Even the Congress is unsure about how to project her.