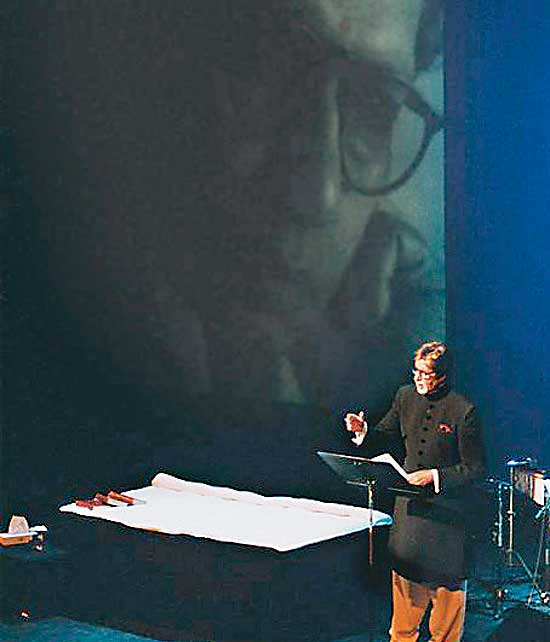 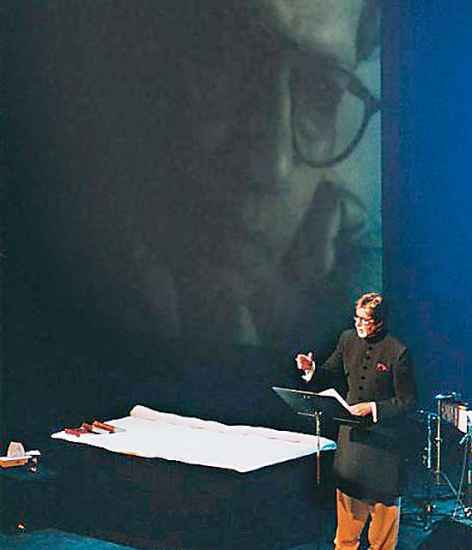 Sometimes a single event tells you everything about a person, and so it was, earlier this summer. Amitabh Bachchan recited his father Harivansh Rai Bachchan’s poetry at the Theatre des Champs-élysées, in Paris. Correction, he not only recited, he sang, he translated and told stories that set up the context of the poems. It is important to discern that he was not grandiose, not pompous and not contemptuous of the doubtful comprehension of the audience. He thought nothing of breaking a poem’s rhythm (sacrilege, I think) to translate it into English, with unselfconscious ease. He was clearly there to communicate, not to join ranks with connoisseurs to affirm his compatibility with them. Amitabh kept it simple. It was a simplicity that begs a hermeneutic process, because it is devoid of oversight with an abundance of circumspection. True art says the unsaid, and touches a tiny nerve that has been pinching in your subconscious. It takes the mundane, strips away cliche concepts and turns it into something extraordinary, making you wonder: how did I miss this? Harivansh Rai Bachchan’s poetry is that.

On the morning of his performance, on June 13, Amitabh was sharing a table with his wife, Jaya, and two ladies who were probably helping organise the show. He was wearing grey sweatpants and a sweatshirt, perhaps with sneakers. One of these ladies asked Amitabh, “What are you wearing for the performance?” Possibly bristling at the patronising question, the great actor answered, “I will go in what I am wearing now.” His wife Jaya chimed in, deadpan, “Yes, he will wear what he is in now.” That evening, as the show opened to applause, Amitabh walked on to the stage in an irreproachable black, knee-length achkan, and cream, softly-creased, well, it’s hard to call it a salwar or churidar pyjama or trousers. It could best be described as what Armani would do, if he were to make a pyjama/salwar. Why mention this? His attention to detail. 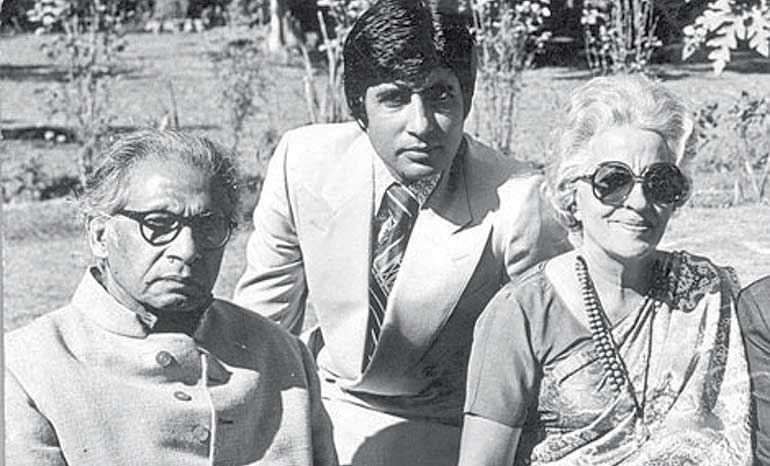 Amitabh broke instantly into Madhushala (The House of Wine), Harivansh Rai’s most famous poem, singing it not as someone who grew up with it but with the freshness of the first time. Madhushala is a poem of 135 quatrains and is considered an important work in the Chhayavaad literary movement of early 20th-century Hindi literature. Presumably aware of the prevalent attention span disorder, Amitabh judiciously edited and began his recitation with the 125th verse of the original Madhushala, and then recited nine more, but not in order.

Amitabh sang his father’s poem not as someone who grew up with it but afresh. He began with its 125th verse, then recited nine more, in no order.

Madhushala is not to be taken literally; it is a poem about life itself. People often presumed that Harivansh Rai was an alcoholic because the poem ostensibly celebrates alcohol. To answer his critics, Harivansh Rai wrote an epilogue. Translated, it reads:

“I’m not unaware of wine but I have never touched alcohol in my life. I will not associate or disassociate myself with intoxication; life itself is an intoxicant, poetry also is an intoxicant and there are many other intoxicants. So to get rid of this perception that I was an alcoholic, I wrote another verse.”

And then, Amitabh recited: [Translated]

Despite that, many critics continued to insist that Harivansh Rai was corrupting India’s youth, even complaining to Mahatma Gandhi. Gandhi called Harivansh Rai to Nagpur where he was attending a Congress Party conference and asked the young man to recite Madhushala. After hearing him, Gandhi pronounced that he saw nothing wrong with the poem. When the prudes persisted with their criticism, Harivansh Rai answered them with yet another humorous poem, from which Amitabh recited the following verse:

“I am a Kayastha and my ancestors had so much to drink, The blood in my veins, 75 per cent is alcohol, I have an ancestral right on the courtyard of the house of wine, Madhushala was sold by the hands of my grandfathers.”

Amitabh explained that during the rule of Prithviraj Chauhan, the poet Chand Bardai had written a humorous poem speculating about how members of various castes would rule, were they made rulers. The last line of the poem said a Kayastha ruler would always be drunk. This is the caste to which Harivansh Rai belonged, though he was not a believer in caste.

Purists may complain about Amitabh choosing not to sing the complete Madhushala and juggling the verses around, but would Harivansh Rai have objected? Unlikely. He was a man who introduced himself as, Mitti ka tan, masti ka man, kshan-bhar jivan—mera parichay (A body of clay, a mind full of playfulnes, a momentary life—that’s me).”

Amitabh also edited a bit, when he chose to say ‘mandir-masjid’, changing it from ‘masjid-mandir’. As well as exchanging “antim vastu na gangajal, haala (the last thing, not gangajal, but wine)” to “antim vastu na tulsi, haala”. For the third poem, Jeevan ki Aapadhapi Mein (In the Turmoil of Life), Amitabh focused the audience’s attention to the synesthetic technique, explaining how the choice of words would create the sound of the meaning.

Amitabh recounted how his father recited kya karoon Samvedna Le Kar tumhari at a friend’s home. Hearing it, teji cried. Harivansh did too. the poem brought them together.

Amitabh recounted that his father was once invited to a dear friend’s home. “As is normal, when friends get together, they used to ask him to recite his poetry. As would happen, my father recited Kya Karoon Samvedna Le Kar Tumhari. When my mother heard these lines, she could not control her tears and neither could my father. This poem brought my mother and my father together. And they decided to get married.”

While studying at Cambridge, Harivansh was taken by friends to a dancing hall, as they were called in those days. Obviously aloof and not connecting with what was on offer, he chose to focus instead on a statue of Buddha at the end of the hall. This provided the inspiration for his famous satirical poem, Buddha Aur Naachghar, in which the poet addresses Gautam Buddha. This poem Amitabh ended with a resounding finale with music that brought the audience to its feet, screaming and whistling.

Amitabh read 21 poems that evening, leaving out two in the programme. There is no way one can observe Amitabh and not see his pentimento. You see the Angry Young Man, his near-fatal injury, the song Rang Barse, his midlife career crisis, the downs and up of his company ABCL. Where others may have drowned in drink and nostalgia, he went to work on television and financial recovery and on to myriad characters he went on to play in the new genre films. Harivansh’s poetry has a place in Hindi literature and his son is now ensuring its renaissance.

Old-world journalists like myself will not succumb to becoming fans of anyone but one can admire talent. The next step usually is: who can it benefit the most, and how? As Amitabh’s performance progressed, a dream kept repeating itself. Why could Amitabh not perform in India, no, not for the literati, but for children in government schools? It is in a language that the young could easily connect to, at least in the North. In a child’s life, an ostensibly small experience can prove to be a metamorphosis. Unfortunately, I am part of the strongest caste system in India, the Hindi-English divide. I cannot write in Hindi well enough for this to be read by anyone who could be instrumental in opening up the minds of the children who need it the most. If all a child has seen is every attempt by her parent to improve her life being met with kicks meted out by the powerful, how can she (or he) imagine any other possibility? Usually, success is only achievable if there has been some ancestral, historical precedent and experience of it. Poetry (as well as films) can be a powerful tool to bring to our children the experience of struggle, and the transcending of it. Unless our children are given the tools to question and to dream, how can they possibly Be the Change? They need to know they are not alone in their struggles; to ignite their imagination; to fire their own possibilities; to see that not everything they experience is the way it has to remain. Harivansh Rai Bachchan’s poetry could do just that for them.

(Madhu Trehan is a journalist and a writer.)