If khadi is getting a designer makeover, can the khadi-clad be far behind? Welcome to the springtime of the young, hip and happening Indian parliamentarian. 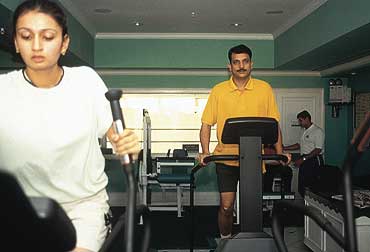 The youngest of them all is the most high-profile and fun-loving. Just recently, 31-year-old Omar Abdullah donned an apron and whipped up a meal for his friends at the Hyatt Regency's Celebrity Chef night. In fact, Omar is a familiar fixture on the Page Three party circuit which perhaps explains why he has had to fight off the impression of being a pin-up boy. Another regular party-goer, the bjp's 40-year-old Sangeeta Singh Deo, has been labelled as part of Parliament's lipstick brigade by those who watch her transformation—with a feigned sense of moral outrage—from a demure, head-covered, sari-clad MP to a socialite in with-it, black outfits.

The one reason why the 37-year-old industrialist Baijayant Panda was given a Rajya Sabha ticket by the Biju Janata Dal (bjd) is that his house is perhaps the only one in Bhubaneshwar that the ex-socialite chief minister Naveen Patnaik can drop in for "a drink and some English conversation". Protests Jai Panda, "I was drafted into the party because I was one of the founding members of the bjd." But one look at his private pilot's licence and his Gymkhana Club membership and there is a distinct impression of a man the Doon School-educated Patnaik would be comfortable with.