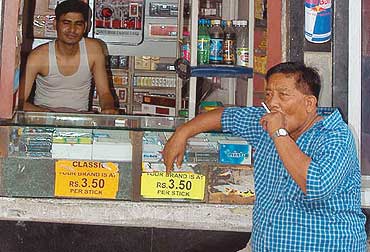 Driving through the dusty highways and towns of Uttar Pradesh, it’s hard to miss the bright cheer of numerous plastic fluorescence boards that advertise cigarette brands like Wills Navy Cut, Gold Flake and Red and White. If sheer visibility alone was the test of effective advertising, then the cigarette brands would edge out the Pepsis, Cokes and the Lifebuoys. And you thought that large-scale cigarette advertising—especially outdoor hoardings—would have gone up in smoke after the Central government apparently gagged the tobacco giants by imposing stringent laws a couple of years back.

The Prohibition of Advertisement of Cigarette and Other Tobacco Products Act, 2003, came into effect from May 2004. Under its provisions, the Union ministry of health and family welfare banned advertisement of tobacco products in all forms of media, including print and outdoor. The only advertisements allowed were two boards or banners of a stipulated size of three feet by two feet outside the retail outlets. Each one of them was to contain a warning message occupying at least 25 per cent of the top area. However, the reality is quite different.

Almost all the boards or banners that you are likely to see on pan shops, especially those advertising the brands of the two leading players ITC and Godfrey Phillips India (GPI), exceed the stipulated size. This is true of both rural areas and urban cities like Delhi. "Ban! What ban? You can see more cigarette boards atop pan shops than ever before," says Kishore Mishra, a pan shop owner near Meerut. He claims that ITC pays him Rs 1,000 a month to put up the two Capstan boards over his shop. Obviously, almost all retail outlets are only too keen to flout government guidelines. 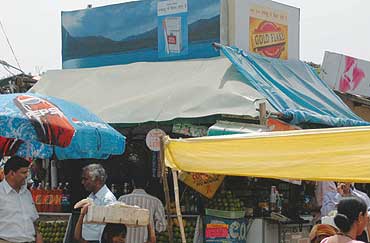 NGOs like the National Organisation For Tobacco Eradication contend that the carpet-bombing through advertisements at points of sale nullifies the government’s intent. It is just a matter of interpretation of the law. When it says that an ad can only be three feet by two feet, does it include only the ad’s content or the background too? While the NGOs feel it should include the entire board, the cigarette firms differ. "We think the size should apply only for the ad’s content," says Surinder Seru, CEO (domestic business), GPI. In fact, the cigarette makers are using the same argument as defence in a case filed against them in Mumbai High Court.

In any case, it seems that the advertising industry’s loss is the local panwallah’s gain. With virtually no advertising avenues left, companies are coughing up anywhere between Rs 200 and Rs 2,000 a month for putting up the two six square feet posters allowed by the law. According to Seru, some retailers present in key locations can even charge upto Rs 20,000 a month. It’s estimated that the country’s three million cigarette vendors earn an additional Rs 150-plus crore a year after the advertising ban was imposed.

That’s eating into the pockets of the advertisers. Before the ad ban came into force, GPI spent nearly Rs 80 crore annually on direct above-the-line advertising; today its spend on advertising and promotional activities has shot up to Rs 120 crore. "Mass media was definitely a cheaper medium, but now we have to rely solely on point of sale promotions. Reaching out directly to three million vendors has increased our spends by 15-20 per cent. Earlier, we never paid a penny to the owner for advertising at his retail outlet, and now we have to pay a huge premium," admits an ITC executive.

Since the ad space is limited to two boards per outlet, at least legally, and with other deep-pocketed and aggressive mncs like Marlboro eyeing the Indian market, the stakes have become higher. It has forced a sea-change in the cigarette distribution business. For one, it has also forced companies like GPI and ITC and tobacco firms like the DS group to offer higher commissions to retailers and, hence, operate at lower margins. 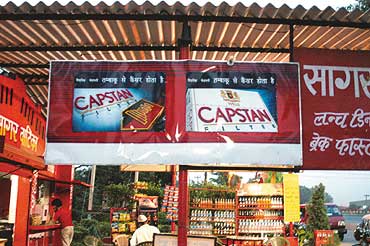 GPI says that due to the twin factors of an ad ban and stiff competition, it’s forced to give retailers a commission of 30 per cent in newer markets like Andhra Pradesh, where it entered recently and sees a huge potential. Even in markets like Haryana and Rajasthan, where GPI’s marketshare is a healthy 30-40 per cent, it’s offering a retail commission of 20 per cent. Typically, in the pre-ban era, such commissions were 10-15 per cent.

"The distribution network for both cigarettes and tobacco-related products is the same and everyone is fighting for
the same advertising space. In the absence of normal advertising, there is a clamour to improve distribution and increase point-of-sale impact by giving more and better incentives to the distributors. Despite that, ITC is relatively insulated because of its humungous network and the yawning marketshare gap between us and our competitors," explains the ITC executive.

In the Indian cigarette market, ITC, with bestselling brands like Navy Cut and Gold Flake, enjoys an almost monopolistic 85 per cent share with GPI a distant second at 12 per cent. "The government has created a difficult business atmosphere. Because of the advertising restrictions, we have had to increase our sales force by a few thousand to reach out to more retail outlets and consumers," adds Seru of GPI.

That’s not all. In their bid to woo existing consumers and attract new ones, cigarette-makers have had to keep changing their packaging and design more often than the past. "When we can’t communicate through media, we have to talk to the consumers through our packaging and at the points of sale. That is why you see constant redesigns and new brand extensions and launches," says a senior ITC executive. In the last two years, GPI has launched new brands like Force 10, Cavender Premium and Tipper, aimed at the lower segment of the market, and I-Gen regulars and milds for the premium segment. ITC, too, has introduced Silk Cut and a milder version of Insignia. It has also repackaged its popular brands like Gold Flake and Navy Cut. 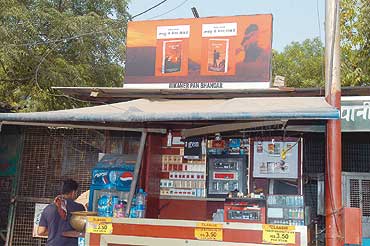 In the near future, things will get more problematic for the cigarette giants. Next month, Union health minister Anbumani Ramadoss’ controversial ban on smoking scenes in films and TV programmes comes into effect. Later this year, India is expected to sign the anti-smoking treaty mooted by the World Health Organisation (WHO), which will force Indian firms to devote at least a third of the space on cigarette packets to health warnings, including pictures of diseased lungs. In fact, all packets that you buy from most nations like Australia, Canada and several European and Asian ones have such huge warnings.

All these will also impact margins. Finally, according to industry sources, they will fall further if Ramadoss’ plan to have "rotational" warnings on packs sees the light of the day. As per this plan, the manufacturers will have to change the pack’s warning messages every quarter highlighting different smoking-related diseases. "Cigarettes attract 34 per cent higher excise than other tobacco products (like chewing tobacco and gutka). The advertising ban, and other proposed measures are seriously injurious to the health of cigarette makers," laments GPI’s Seru. Poetic justice, wouldn’t you say?