Ibn Batuta’s wondrous Delhi lingers on in ruins, amid oblivion 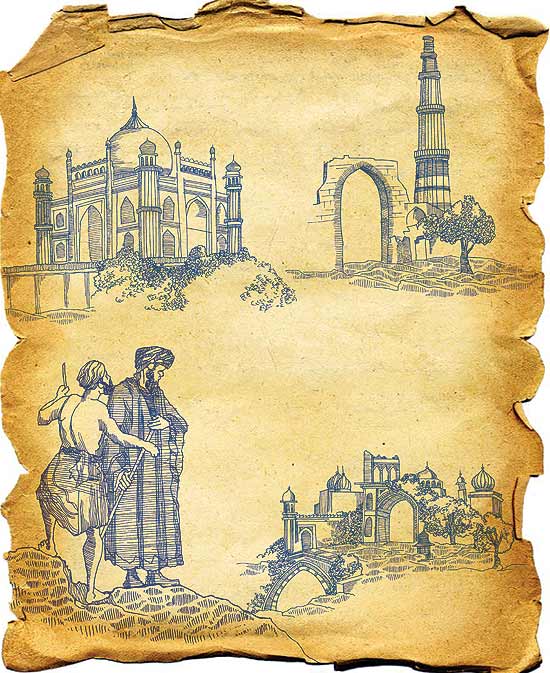 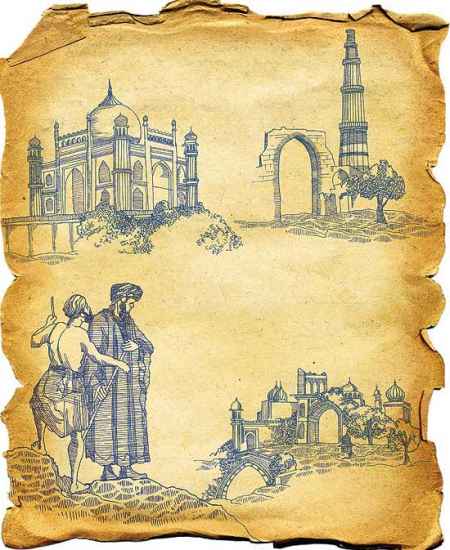 The Moroccan traveller Ibn Batuta made a point of going off the beaten track. His 14th century account of India is the most entertaining of early India travelogues and the world of Batuta still lives on amid the ruins of south Delhi. By the 14th century, Delhi had become a magnet for adventurers and opportunists from throughout the Muslim world, in the same way that European mercenaries and fortune-seekers would flock to India four centuries later. Ibn Batuta’s engaging and often scabrous accounts in his Rihla, or Travels, provide an extraordinarily detailed picture of courtly life in Tughlaq Delhi. He left his native Tangiers in 1325, a newly qualified Islamic jurist. He meandered his way around the Middle East and Caucasus, performing the Haj twice, encountering many marvels and having lots of sex with slave girls.

As he nears India, other travellers tell him about the Sultan of Delhi, Muhammad bin Tughlaq, who “makes a practice of honouring strangers, and showing affection to them, and singling them out for governorships or high dignitaries of state”. He also learns that the Sultan loves getting presents and is generous with return gifts. And, indeed, on receiving his gifts, the Sultan sends Ibn Batuta several thousand silver dinars, and absurdly large quantities of flour, meat, sugar and areca nuts. A little later, at a time when, Ibn Batuta informs us, in the digressive personal style that would later become de rigueur with travel writers, that he cannot sit down because of a boil on his bottom, the Sultan makes him a judge. This was an enormously profitable sinecure, and in the long India section of the Rihla, there is no reference to him ever hearing a case.

Ibn Batuta remains grateful to his patron, but later, at the end of his journey, when he is safely back in the west, he is able to relate just how nerve-racking it was to work for Muhammad bin Tughlaq. “This king is, of all men, the most addicted to the making of gifts and to the shedding of blood”. He comes across, in Ibn Batuta’s account, as a stereotype of the fabulously rich oriental tyrant—preposterously generous one moment, savagely cruel the next: “His gate is never without some poor man enriched or some living man executed.” He has gold and silver coins launched into the grasping Delhi crowds from catapults placed on the back of elephants. A turbulent sheikh, who calls the Sultan an oppressor, has his mouth prised open with forceps and liquefied human excrement poured down his throat. The sheikh, who earlier had his beard picked out, hair by hair, is then beheaded. Ibn Batuta was terrified. He used to visit the sheikh, but only, he now pitifully insists, to see the cave in which he lived. He is placed under armed guard, goes on a fast and is only freed after the sheikh’s execution. Eventually Ibn Batuta decides that it’s time to leave Delhi. He swaps clothes with a mendicant, renounces the world, and asks the Sultan’s permission to go away on pilgrimage—but the Sultan insists, to Ibn Batuta’s astonishment, that he instead become his ambassador to the king of China, “for I know your love of travel and of sightseeing”.

When I go on about the glorious medieval ruins of south Delhi, I’m chortled at; another foreigner more interested in the past.

Ibn Battuta and his party of 4,000 people, many of them slaves sent as gifts for the king of China, don’t advance much beyond modern Aligarh, 70 miles from Delhi. They are attacked by bandits, his companions seized and killed, and our hero drifts half-naked and starving through the countryside before being rescued. And as he travels through India he encounters many marvels and hears about many others—levitating yogis with sandals that also levitate, men with the mouths of dogs, humans that turn into tigers and can extract the heart of a man without leaving a wound, and—in what is now Sri Lanka—monkeys that have sex with women. A few of these may not have been imaginary. High among these are the Maratha women of western India whom “God has endowed with special beauty, especially in their noses and eyebrows” and, Ibn Battuta assures us, “they have, in intercourse, a deliciousness and a knowledge of erotic movements beyond that of other women”. A nineteenth century Moroccan prince who owned a manuscript of the Rihla wrote a marginal note at this point, “O God, give me a taste of this delight”.

Ibn Battuta took few notes—and he lost those he did make when he was robbed by Indian pirates. His very detailed account of his journeys therefore is entirely reliant on memory, which might explain some of his exaggerations. But he also clearly wanted to impress people back home, both with own achievements, and with the way Islam had spread through the East. His dimensions are often awry. Many of the Delhi buildings he describes have survived, including the Alai Minar, an enormous stump of a tower next to the Qutb Minar, which would have been the tallest building in world if it had ever been completed. Ibn Batuta insists that three elephants could walk abreast inside the tower’s passage, whereas it would in fact be a struggle for a single elephant of average girth to squeeze through.

I live in Ibn Batuta’s Delhi. I am surrounded by the ruins of the city he knew, ruins that I adore, and that are disappearing—and I sometimes feel I am the only one who cares. The southern quadrant of modern Delhi is full of medieval ruins, hundreds of them, tombs, palaces, fortresses, mosques, wells, pavilions—more than any other city I can think of. Almost anywhere else in the world, many of these ruins would be major tourist attractions.

Take what’s left of the Sultan’s palace, for instance, where Ibn Batuta witnessed such dramatic extremes of cruelty and largesse. It is now known as Bijaymandal and consists of a large arched hall, with part of its roof intact, and a raised octagonal pavilion at one end. From my home, it is a short, dangerous amble across the multi-carriageway Outer Ring Road which was a dirt-track until the 1960s, past a 2008-vintage flyover, not far from the nearest Metro station, open to the public since 2010. Bijaymandal has its uses. It is frequented by drug addicts, card-players, young lovers and goats—and is popular with latrine-less locals who use it as a urinal and a shithouse—but I’ve never, ever, in my half dozen trips there seen anyone else ‘visiting’ it; not a single tourist, Indian or foreign. One foreigner who has been to Bijaymandal more than once, in fact, is the greatest of modern Ibn-Batutistas, Tim Mackintosh-Smith1. He described the site as being “booby-trapped with faeces”, but proceeds to soliloquise on the importance of being “undeterred by the turd”, a useful mantra for anyone visiting India’s less-heralded historic sites. Many are deterred, but not me. And when I chunter on at Delhi parties about the glorious medieval ruins of south Delhi, I’m chortled at; another foolish foreigner more interested in the past than the future. I’m made to feel that I’m behaving in the way Indians expect foreigners to behave. I have learnt to laugh at myself, on this subject at least. I realise that I am a slave to the Picturesque, that quaint aesthetic ideology of the 18th century, which led to the construction of new ruins across Europe, and the depiction by Western artists of many ancient Indian ones. And I even have a secret sympathy with the artist-clergyman William Gilpin, who suggested that “a mallet, judiciously used” might render the insufficiently ruined gable of Tintern Abbey, later immortalised by Wordsworth and Turner, more picturesque.

A well-worn ruin has its place in the finest of compositions—and can still make my day. There’s a painting on my wall right now, an oil dated 2005, by one of my oldest friends, of the Delhi garden of a house where I once lived. Looming gloriously over the garden’s mottled lawn, its shrubbery and its washing line, is a fine piece of Ibn Batuta’s Delhi, a enormous jagged eminence, what’s left of one of the jambs and the tower of the southern gate of Siri Fort. In 2008, the city authorities took it upon themselves to ‘beautify’ the walls of Siri, built by Delhi’s Khilji dynasty as their capital just a quarter of a century before Ibn Batuta turned up in India. At first I was pleased, because several parts of the wall looked as if they were on the point of collapse, and needed stabilisation before the next monsoon. The undergrowth was cleared, and then the builders turned up. They brought with them lots of broken rocks, similar in size and shape to those used in the wall. They began rebuilding missing parts of the wall, and jagged-edged ruins became smooth-edged surfaces, either parallel or perpendicular to the ground. They added a couple of new bastions to provide additional medieval authenticity. It did all look very neat and tidy, but I was forlorn. I missed my untidy ruins. And I still long to sneak out in the night, armed with a mallet or pickaxe, and return them to their once ruinous state.

(Sam Miller is the author of Delhi: Adventures in a Megacity and Blue Guide: India. This is an extract from his next book, which looks at foreigners’ fantasies about India.)

1 Tim Mackintosh-Smith, a sesquipedalian, paronomasiac British resident of Yemen, has written three travels books about Ibn Batuta, whom he refers to as IB or ‘The Tangerine’, after his home town, Tangiers. William Dalrymple visits Bijaymandal in his 1993 Delhi travelogue, City of Djinns, and either fails to notice the turds that were undoubtedly clinging to his boots, or is too fastidious to mention them.