A WEF-Harvard study puts India ahead of China in global competitiveness, and says how India can do even better...much better 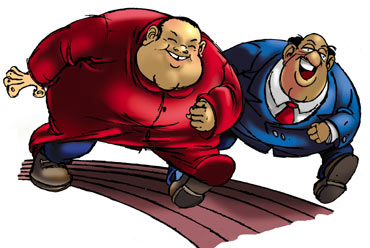 outlookindia.com
-0001-11-30T00:00:00+0553
It's a perfectly-timed salve to an industry badly mauled by Chinese imports. For the first time, a global comparative study of nations, orchestrated by the favourite champion of India's cause, the Geneva-based World Economic Forum (wef) and conducted by Harvard University gurus Michael E. Porter and Jeffrey D. Sachs, has ranked India seven places ahead of China in current competitiveness. The 2000 Global Competitiveness Report (gcr), an annual exercise by the wef and Harvard U, ranks India 37th out of 58 countries, compared to 42nd last year. The topper is Finland, just ahead of the US and Germany.

Though sceptics, mainly academics, have raised their eyebrows, India Inc is overjoyed. Exults Grasim chairman Kumaramangalam Birla: "Deregulation and globalisation have opened windows of opportunities, on which sectors like infotech and pharmaceuticals have admirably leveraged. There's a flood of mncs to attract the best brains, even for their overseas needs. A steady stream of structural reforms over the past decade has resulted in an economy that's resilient, buoyant and waiting to break out."

Explains Sunil Lulla, ceo of indya.com: "This year, a new perspective has been added in the way wef reviews countries' performance and potential—an economic creativity index which shows the technology focus of countries and the way they link themselves to the global technology engine. In the last 5-6 years, India has been recognised as an emerging technology hub in the global map. It has a strong intellectual capital base and is rightly placed—socially, economically and technologically—to qualify as a competitive nation."

The gci, on the other hand, measures factors that contribute to a high gdp growth rate. It combines three indices—the creativity index measures economically effective innovation or tech transfer, the finance index measures the efficiency of the financial system, and the international index measures the degree of economic integration. And since India doesn't boast of a reasonable success in any of these, its gci ranking is a poor 49 (China is at 41), just ahead of El Salvador and Bolivia! Agrees Tarun Das, director general of the Confederation of Indian Industries (cii) which partnered the gcr: "The ratings will improve if India works on its weaknesses in interest rates, infrastructure, labour productivity and corporate discipline, sectors where China has a distinct advantage and is able to dump cheap products across the world."

Still, that's just grist to the mill of the hardliners who claim India's approach has been insular, and sometimes too prematurely self-congratulatory, still seemingly ignorant that globalisation is completely rewriting business rules and generating routine competitive shocks. "It's a lot of rubbish to say India's global competitive advantage places it over China. It's almost like saying India is the millennium's best foreign investment destination," remarks Prof Prabhat Patnaik of the Jawaharlal Nehru University (jnu).Adds Prof C.P. Chandrashekhar: "We may have made great strides but we trail considerably if we benchmark our progress against Malaysia, Korea, Thailand, Hong Kong and China. In fact, India and China faced similar macroeconomic challenges but China has moved ahead of us. Remember, we're not even within the first 30."

The truth lies somewhere in between. As Sachs writes in the gcr, in the '90s, "expansion of global markets helped both innovation and rapid economic growth. China, India and Poland and much of East Asia experienced increased global integration accompanied by rapid economic growth." But even among these countries, some improve their prosperity faster, while the rest have the potential to sustain a higher level of prosperity.

And among this second group of underperformers, India can count itself very strongly. Writes Porter: "Underperformance bodes well for the future because the platform is in place for higher gdp per capita if macroeconomic, political and other constraints can be eased. Countries currently underperforming their microeconomic fundamentals include South Africa, India, Turkey.... The performance of India and Brazil may be pulled down by their political complexity and the existence of large populations outside the mainstream economy." In other words, while growth is important, distribution will be the key to climb into the club of the first 20 most competitive nations, which, needless to say, is dominated by the world's developed and temperate zone countries.

But for now, that's enough cause for celebration. Says Rajat Jain, chief investment officer with idbi-Principal Finance: "Let us not look at China and say it's great because it has been able to draw much larger investments than India. While China has managed to surge ahead in the manufacturing sector, we rule the roost in the service sector. We have some of the world's best software professionals and equally classy people in service-oriented industries like hotels, education, media and medicine. And that is reflected in the report." Agrees Manish Modi, chief entrepreneur, NetAcross: "The performance of India's software and services sector provides a tremendous moral and financial impact on the country's perceived competitiveness, specially in its ability to provide a scalable and efficient platform as the preferred back-office location." Adds Vineet Bhatnagar, Refco-Sify Securities MD: "The capital markets have also performed impressively since 1998."

The gcr follows the recent A.T. Kearney Global Business Policy Council survey which asked chief executives of 1,000 global firms (representing an investment of about $2 billion) on India's business climate. "Global investors are interested in India's assets (large markets and dynamic potential) which give it a distinct advantage. ceos say high levels of education, technical capability among workers and competitive wages are India's other attractive features. Besides, 94 per cent of all ceos believe India's labour force has the necessary skills required to support their direct investment," says Paul A. Laudicina, VP and MD of Kearney's global business policy council.

He, however, adds that India's investment profile is conditioned by a handful of factors that inhibit fdi. "Bureaucracy tops the list of investor-concerns and the perception that the reform process is slowing has also created doubts about the market's long-term potential," says Laudicina. Besides, in general, it would appear that India's English-speaking population is not a factor that, on its own, differentiates it from China in investors' minds.When probed specifically about this population, telecom, hi-tech, consumer products, power and utilities firms, many considered it to be a significant characteristic which distinguished India from China. Two-thirds of telecom and hi-tech respondents noted that India's English-speaking population differentiates it from China as an investment destination.

The scales, it would appear from gcr, are balanced quite well for both India and China. India's technology transfer index—which wef claims is relevant for any developing country since it reflects its participation in new technologies and, in turn, helps increase the gdp—is 0.32 compared to China's 0.35 (the less the index, the better). The ranking in the economic creativity index is 0.03 (0.56 for China). The cci places India above China in areas like recessionary expectations, judiciary, gdp growth, economic crises, exchange rate stability, savings and bank solvency. However, in a wide range of areas like bureaucracy, public trust of politicians, import tariffs and interest rates it lags way behind China.

Could we be blowing the China threat out of proportion? Not really, warns B.V. Naidu, director of the state-owned Software Technology Parks. "Software played a major role in maintaining our lead. However, now we need to consciously watch China because of the massive infrastructure developments (including Internet penetration and English language training). India needs to focus more on its infrastructure sectors to maintain the lead." Atul Punj, Punj Lloyd chairman, feels that the Chinese dumping factor should not be an issue to rate India's competitiveness because apart from China, a whole lot of similar products from Korea, Japan and Taiwan are flooding the markets and that these work on low-price, high-scale figures which very few Indian companies can match. "Look at other factors too. The government is stable, the pace of infrastructural development has quickened (telecom and roadways), the country's intellectual capital is increasing rapidly and market regulators are on the right track."

Many also attribute India's ranking to its gdp growth which has been consistently over 5 per cent for the last two decades. Real gdp growth in the current year is projected around 6.5 per cent, among the highest in the Asia. Investment in non-productive assets like gold is low, as is the exposure to short-term debts. India, which weathered global economic shocks in 1997-98, now has forex reserves at over $36 billion. Poverty, still a formidable challenge, has reduced and life expectancy improved. And, it must be to India's distinction to appear 37th among 58 nations with a per capita gdp (purchasing power parity-adjusted) that is the second lowest—$1,913 compared to Vietnam's $1,815. Then, it also shows that India has a lot of catching up to do with what it perceives, perhaps wrongly, its bugbear—China's per capita GDP is $10,796!

The gcr makes it clear that India is a poor country with rich potential for rapid growth and offers valuable policy lessons in terms of emerging priorities. It also explains why it isn't enough to appear better than China or any other competitor. More important is to build on the strengths and work on removing the weaknesses to make ourselves more competitive. Definitely recommended reading for North Block mandarins, especially on Budget eve.