Tall, Dark, And Can Cook!

Vacuum cleaners and home delivery systems have made the role-reversal easy. Times they are a-changing, and so are the numbers, writes Soutik Biswas 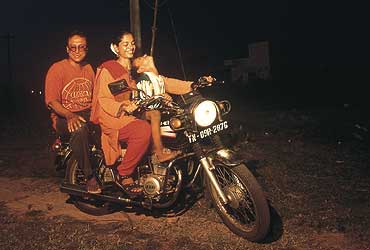 In patriarchal and conservative India, not many women are as lucky as Bishakha. Men who stay at home for more hours than their working wives, and pick up the chores, are still few and far between. The stereotype of an urban stay-at-home spouse here is still of a dysfunctional male, a wastrel of sorts, and a failure—basically stemming from an acute acceptance of male as hunter-provider. When men willy-nilly take on the role of house husbandry and being primary care-givers to their children, the role reversal is frowned upon by relatives, friends and, in most cases, by women themselves. In the male-dominated Hindi heartland, for example, working urban wives, possibly the most conservative, would hate their men to be house husbands. It's a curious crisis of sham modernism. Delhi-based Nitisha Chauhan, an advertising professional, says she wouldn't like her husband to be a stay-at-home chores person ("it's still bad for his and my image, you see"). At the same time, she cribs about her husband not helping her with household chores. But in, say, the more liberal east where the vice-grip of patriarchy is less stifling, urban professional men don't balk at the prospect of working in and staying at home and picking up the chores. "All this talk about house husbands really arises out of gender roles dictated by the society," says Calcutta-based artist Chittrovanu Majumdar, who works out and looks after home, while his wife spends longer hours outside teaching. "Why should housework be compartmentalised into male-female areas? The fact is that you have to do lots of things in day-to-day life and you do it with grace, because you have a commitment. Not necessarily that you like doing everything. Even a woman may not like cooking or some other chores on certain days, but she does it."

Even this practicality continues to elude Indian men. But a few good men are coming out of the shadows, and saying that they're proud to be house hubbies, stay-at-home spouses, Man Fridays, Good Samaritans, call them what you will. As more and more women enter the workplace, redistribution of household chores is anyway taking place in urban nuclear families: professional and educated middle-class men are doing more housework and changing diapers without much ado. It's still a far cry from, say, the US, where more than a quarter of primary care-givers in a family are already men. "There's a more conscious effort now in urban double-income families to share work. House husbands, of course, are fewer. The survival of patriarchy is still paramount in India," says Prasanta Roy, who teaches sociology in Calcutta's Presidency College.