'Taliban Are Like Brothers To Us; Osama's A Mujahid And A Hero'

Lashkar-e-Toiba chief Prof Hafiz Mohammad Saeed is among those who counter Gen Pervez Musharraf's decision to support the US in its operation against the Taliban and Osama bin Laden. Excerpts: 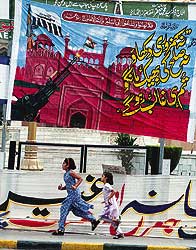 outlookindia.com
-0001-11-30T00:00:00+0553
How do you view General Pervez Musharraf’s decision to cooperate with the US in its efforts to capture Osama bin Laden?
I believe the government’s decision of joining the US in its operation against the Taliban is the most unfortunate in the country’s history. It is the duty of the entire Pakistani nation to rectify the mistake the government has committed. Pakistan should not cooperate with the enemies of Islam in nabbing the hero of the Muslim world. We will mobilise the general public against this blunder and prepare them for jehad.

Did your President have any other option?
He should have told President Bush that Pakistan doesn’t have anything to do with either Osama or the Taliban. The Americans should not have resorted to pressure tactics against Pakistan. Nor should Pakistan have bowed to Washington’s pressure.

Do you support the September 11 attacks in the US?
No. But whatever happened in the US needs a lot of soul-searching by the American leadership.

You mean the US isn’t justified in issuing threats of retaliation?
You can never counter terrorism by committing superior terrorism. President Bush should not get emotional and instead try to understand the circumstances which led to the September 11 incidents.

Do you think the US will now ban your organisation?
Although the US State Department, in its recent report, had stopped short of declaring the Lashkar a terrorist organisation, the Americans are going to label us thus in the near future. The Americans actually want to gain the Indian market. Besides, China is also a source of headache for them. Therefore, it is hell-bent upon heaping favours on India. We have challenged the US time and again to prove terrorism charges against the Lashkar in any international forum. We repeat this challenge now. We can prove who is the real terrorist: India, Israel, Russia, the mujahideen or the US. The world fully knows who was responsible for the brutal killings of millions of innocent people by dropping nuclear bombs. Has the world ever seen a greater act of terrorism than that?

The Poet Of Zealotry