Enriching or just cheap? Bitter-sweet lessons in trade with China. 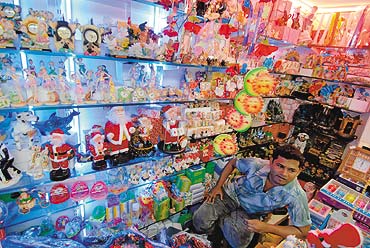 outlookindia.com
-0001-11-30T00:00:00+0553
Some like it, others don't. Some have fun during their stay there, others aren't so lucky. But all of them have realised they just can't ignore China. This feeling is not restricted to the senior managers in big corporates; it has even sunk into the hearts of mid-level managers, exporters and small-time traders. It's apparent in Mumbai's Crawford Market, the largest wholesale mart in the city. In some lanes dubbed China Bazaar, the red dragon is inextricably linked to the livelihoods of Muslim traders who import Chinese products, travel to the country, and talk about it with great familiarity.

Ali Mohammad, a partner in Toy World, which sells Chinese battery-operated toys, can reel out statistics about Shantou, a hub in China's Guangdong province, whose 3,000-plus toy-makers employ 1,00,000 people, and export $1.5 billion worth of products each year. "Dolls, cars, aeroplanes, talking-and-walking animals and animated jokers are hot-selling Chinese items. The ease with which one can source products from there and the cheap costs was the reason we shifted from ready made garments to toys," adds Ali, who plans to revisit Shantou soon.

The "ease with which one can do business with the Chinese" is a regular refrain among this crop of small and medium-sized businessmen. Says Shailesh Ghatlia, owner, Premsons, a Mumbai store that stocks food items, toys, stationery, crockery and gift articles, "We've been sourcing 90 per cent of toys and about 70 per cent of stationery from China and hence, I go to Shanghai, Guangzhou and Beijing quite often. I've noticed that doing business has become easier. The Chinese are extremely shrewd businessmen and don't like to refuse anything to a customer, even if they compromise on quality while doing so."

Situated in the vicinity of Mumbai's largest mosque, Jumma Masjid, is Indu Opticals which at any given point is stocked with 50,000 frames. Its owner, Raj Bashomal, who has been visiting China for three decades, claims, "I've come to regard my suppliers as family members. With them, I have celebrated festivals, sung songs, drunk and eaten. They're very eager to establish long-term contacts and rarely turn down a customer. I go to Shanghai five times a year, and am seriously thinking of settling down there as rents and other utilities are cheaper and it's a much better city than any Indian one."

China's passion to be the best suppliers in the world is visible in other areas. A Noida-based trader explains the Chinese are not only ready to make products as per the buyers' specifications, they even do proactive research on products that have a huge demand in the Indian market. For example, apart from selling lights and gifts during the past few Diwali seasons, this year the Chinese supplied idols of Indian gods. "The gods were made as per the specs we gave them," maintains this Noida trader.

Many are impressed by the Chinese work culture, as the employees there—from top to bottom—don't leave any stone unturned to grab additional business. Ajoy Krishnamurthy, CEO, Sankalp Retail Value Stores, the master franchisee in India for the US-based My Dollar Store, narrates this experience: "When I was last in China, I interacted with a 26-year-old woman, who was managing my account at a supplier firm. For two days, we worked 24 hours but, instead of complaining, she was full of cheer and enthusiasm."

There's also a flip side. The Chinese firms are under pressure to meet targets set by the provincial governments so they end up chasing quantities. "They are granted export licences and are subsidised by the government. In turn, they're forced to chase stiff targets. So, they try and get business by any means. For example, each firm will have 2-3 agents who keep undercutting each other in the same area. Finally, their work ethic sucks," says Shivas Nath, a wool agent for Indian buyers and foreign suppliers.

Others complain the Chinese treat outsiders on the basis of what the latter bring to the table. "Although every investor is welcomed, there're differences. The Tatas were given a great response as they talked about huge investments. But if you're a small investor, you may get pushed into an industrial shed," says R.K. Dhawan, chairman (North India), FIEO, whose firm has an office in Shanghai. It's also difficult to build relationships in China. "One has to overcome language and cultural barriers and fit into the relationship-based society, whose values apply to business," says Puneet Jain, VP (sales & marketing), Newgen Technologies, which is trying to expand its China operations through local partners.

In addition, there's a huge problem relating to IPRS. Contends Vishnu Dusad, MD, Nucleus Software, a mid-sized software firm, "Doing business with China is tricky business because IP protection continues to be a grey area. The Chinese consider it their birthright to copy anything and everything, and that is a huge bottleneck. China is indeed a huge market, so we cannot ignore it. But, at the same time, one has to be extremely careful. One has to be mentally prepared that your intellectual property will not remain yours in China for a long time."

Still, everyone agrees one needs to do business with, or in China. The reasons: Indian consumers demand Chinese products, Indian firms need to set up bases there to become globally competitive and China is a huge consumption market. Zahur Khan, whose Zoya Gift Shop in Crawford Market stocks ceramics, says local demand has forced him to source from China. "I supply goods worth Rs 8-10 lakh every fortnight to stores in Delhi, Chennai, even cities in Uttar Pradesh," he says. Newgen's Jain talks about the pull factor: "We can't ignore China because our products are suited for its booming banking, insurance and finance sectors."

A similar contradiction, coupled with a compulsion, is evident when regular business visitors recount their personal and social experiences in China. A number of them are impressed with the glitz, the overwhelming infrastructure, and the seemingly growing prosperity. A Mumbai-based trader says he was surprised by the fact that he was picked up in a bmw at the airport. "I saw people with Rolexes all around me, and my first impression was that they were wearing fakes. And then, I saw the plush offices and realised they were for real."

Another visitor recounted the story of how none of the taxi drivers cheated him. "In all cases, my actual fare to any destination was either less or the same as what I was told it will cost by my hosts. The Chinese are extremely savvy when it comes to tourists; they know how to take good care of their visitors," he adds. According to Sankalp's Krishnamurthy, "China is beautiful, not just because of its sprawling infrastructure, but also because of the energy emanating from its extremely optimistic population."

But there are others, who criticise China's food, its monotonous night life, and the inability to communicate with the locals, who don't speak English. Nath sums it up succinctly: "I can eat anything, but even I have to carry packaged food from India to escape the insipid and half-cooked Chinese dishes. And imagine having to sit each evening with your host, drinking till wee hours of the morning, and spending most of the night at a karaoke bar. The karaoke bar is what constitutes night life in the smaller towns I visit."

Despite these odds, there's a pull factor. Almost all Indian visitors wish Mumbai or Delhi can become a Shanghai or Beijing. They visit China and think of a tomorrow when that dream will be realised. They feel they have to see China's cities to be in a position to replicate them in India.

By Shuchi Srivastava and Arindam Mukherjee

Does The Elephant Fear The Dragon?